The dragonfly that was the most prevalent at the bass ponds when I visited in July was the blue dasher. 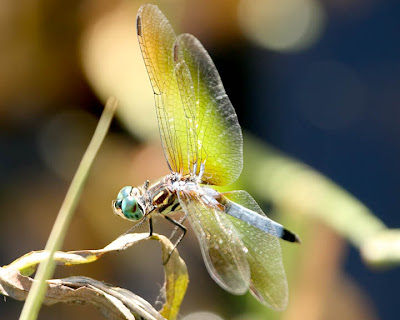 A member of the Libellulidae family the blue dasher is a common dragonfly seen at lakes ponds and slow moving streams through out the US and into Mexico and southern Canada. They prefer lower elevations and as such are not found in the Rocky Mountain Region. 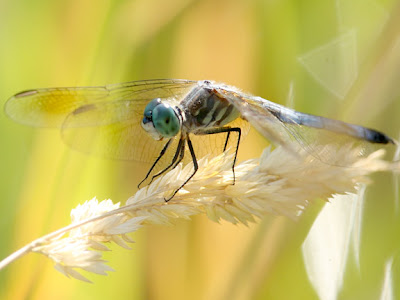 Blue dasher hunt from a favorite perch, making short flights to catch small flying insects and then return to their perch. 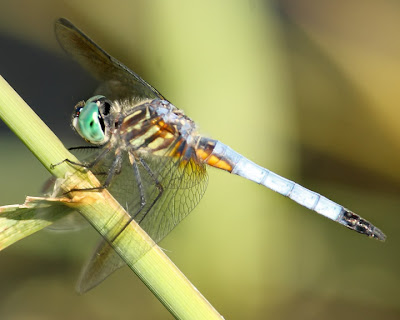 Both Male and female of the species will defend good feeding perches. 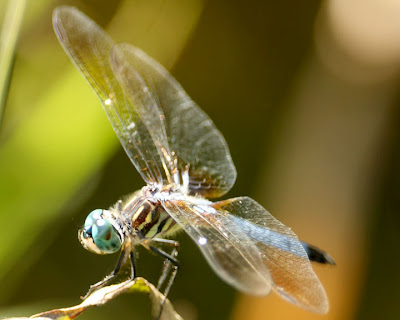 Immature blue dashers and females have a green face and thorax. Their abdomen is brown with with a pair of yellow dashed lines running across the top which end before segment 10. As the dashers age the abdomen changes powdery blue with pruinose. Although the females do turn blue also they do not get as blue as the males do.
Posted by Ecobirder at 8:36 PM

Your dasher and dragonfly photographs just keep getting better. Saving the best for last are you? This first photo is awesome, I know you think I use that word for all of your photographs. It is true. You give me a goal to try to achieve. I actually gasped when I saw the first photo.

Thanks Leedra, ectually I have been getting some very good shots of Canadian and green-striped darners of late so there are some more good dragons to come just not sure when, since I have so much in queue.