Yesterday was the fall equinox. An equinox is a day when the sun is directly over the equator. This phenomena provides us with a day that has equal amounts of light and darkness, 12 hours of each. There are two equinox each year the spring equinox, which is around March 20th, and the fall equinox, which falls around September 22. The fall equinox is the herald of less daylight, the days continue to get shorter until the winter solstice which occurs around December 21st, and it is also the official end of summer. 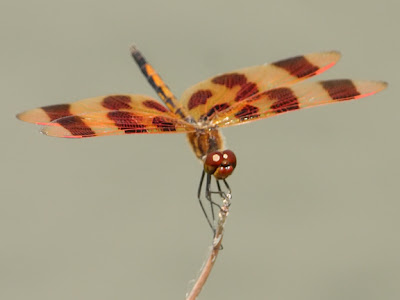 So now that we are officially in fall I think that it is quite symbolic to post these pics of Halloween pennants that I took back in July at the Bass Ponds. 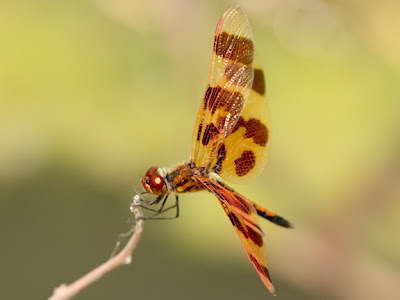 Halloween pennants have a very large range. They can be found from Southern Canada all the way down to the Florida Everglades. Males are orange, like the ones pictured in this post, while females are often more yellow in color. 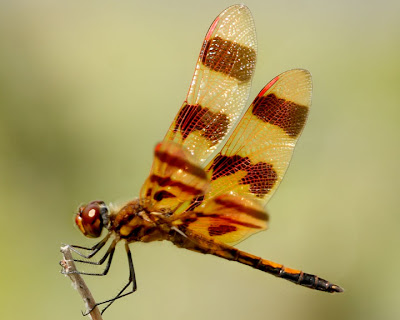 Halloween pennants can be seen flying into about the middle of September, although I have not see any around here since the beginning of August, they are often active on colder days and when it rains.
Posted by Ecobirder at 8:37 PM

Wow, these are amazing!

The photographs are wonderful - not so much, the reminder of impending darkness. lol

Outstanding photos! And in the last one - doesn't he look like he has an angry expression on his face? Maybe I'm imagining things....

Beautiful photographs! And the info encourages me to be on the lookout, if not here, maybe in Florida (trip about month away).