Frogs or Toads or Both?

I have spent a good deal of time over the past few days over at the Carpenter Nature Center. Friday was a gorgeous day, with plenty of sunshine and temps up into the mid 80's, so after I got off of work I headed over to Carpenter to watch the bird banding. The banding was a bit slow but there were a couple of cool birds that found their way into the nets. There were a couple of sharpies, that they banded before I got there, the first white-throated sparrow of the season and a brown creeper, which they only catch a couple a year. I did get some pics but I will post them later, I still have a back log that goes back into July.

After the banding I stuck around to help get ready for the Raptor Release that was held on Saturday. Pretty much my whole day Saturday was spent at Carpenter also. Between doing education at the hawk/falcon ring in the morning and the owl ring in the afternoon and sneaking away to take pictures off the release in the middle I was pretty busy. 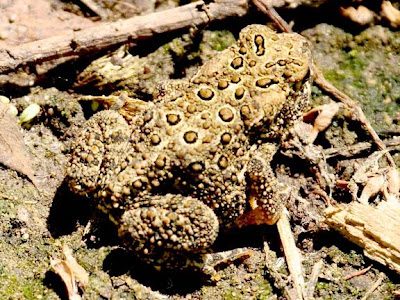 I was so busy that I did not even get to go watch the nature centers program on reptiles and amphibians. Which is too bad because it may have given me some good info for today's post. As the summer went on I began to see more and more toads on my little journeys out into nature, so I decided to get a few pics, while I was out at the Bass Ponds back in July, to share on the blog. 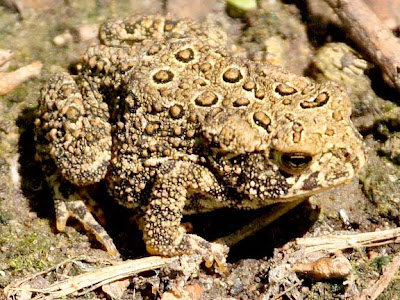 I did a bit of research and I was surprised to find out that while all toads are frogs not all frogs are toads. You see the term frog is the scientific term of all frogs and toads. Toad is just a distinction or type of frog. So what makes a frog a toad? Well the main difference is that toads tend to have rough dry leathery skin typically filled with many bumps that resemble warts. This protective skin allows them to live further away from water then the other members of the frog family who have smooth skin. Toads usually also have shorter legs then other frogs and do not have teeth, other frogs have small fish like teeth.
Posted by Ecobirder at 7:36 PM

"a face only a mother could love.."

I been trying to bone up on frogs myself. We had several non Minnesota types this summer which probably arrived as eggs on plants I purchased. Probably from Florida or someplace.

As usual, great information. My daughter had frogs when she was a teenager, other than having to buy food for them I don't know much. Great photographs too!