Colorful Dragons at the Bass Ponds

There are many people around the world who enjoy birdwatching. They find birds fascinating and usually use words like colorful and beautiful when asked to describe what they enjoy about birds. Many people also enjoy butterflies and use the same words to describe them, but it is rare that you hear dragonflies described in these terms. 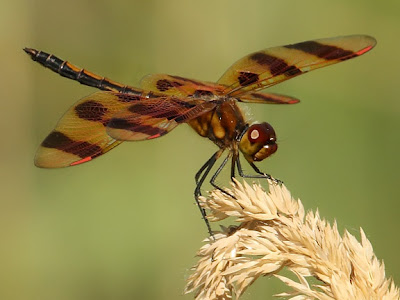 The truth is that there are dragons that can rival many butterflies for their color and beauty. I found two different examples of extremely colorful dragons when I visited the Bass Ponds Back in June. 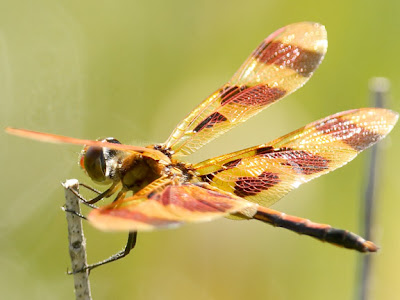 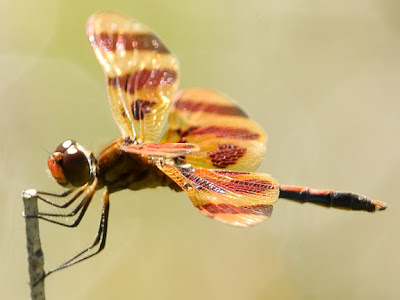 Unlike many other types of dragons, Halloween pennants do not seem to mind the weather so much. They can often be seen flying on windy days, during cooler temps or even during light rain or drizzle, when other dragons are under cover. 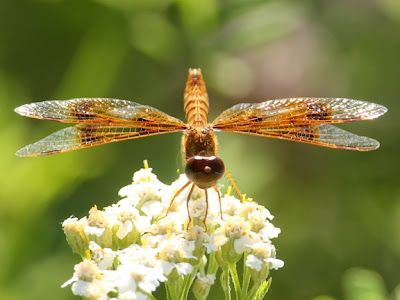 This next dragon looks similar but it is actually a very different type. The eastern amberwing has similar color as the Halloween pennant but it is easy to tell the difference, since the amberwing does not perch like a pennant. 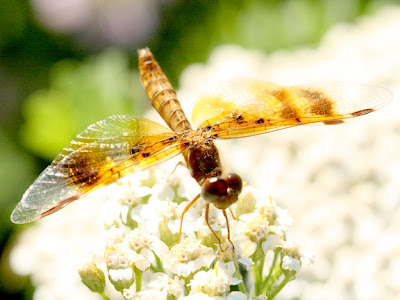 The eastern amberwing is also smaller in size, then the Halloween pennant and usually much more wary. Usually they tend to only perch over water, for safety, but I got lucky to find this one perched on a bloom. I was also lucky that it stayed there while I took a few shots.
Posted by Ecobirder at 6:42 PM

These are stunning drangonflie shots!

The colors are so nice on the Halloween pennant - perfect for autumn.

Your Halloween Pennant is strikingly similar to our Variable Flutterer, which ideally should have had a name ending with Pennant.

They are great. I agree the Halloween oennants is so eye catching. Just jumps out, thanks for sharing.