The Vince Shute Wildlife Sanctuary is the best place to see black bears in Minnesota but it is also a pretty good place to do some birding, even though you have to do it all from the bear viewing platform. While we were there photographing the bears we did take time out to snap a few pics of some of the birds that we saw. 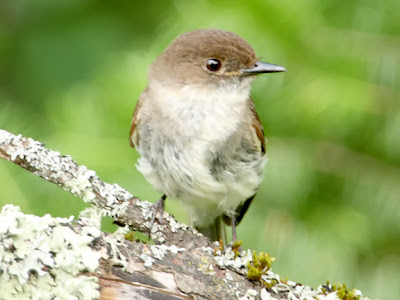 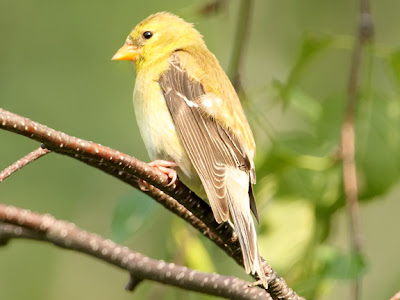 Like many species of birds, the female goldfinch is not nearly as bright or colorful as her male counter part. This usually indicates that it is the female of the species that gets the privilege of selecting the mate. The males are all dolled up with their bright shiny feathers because they need to work hard to attract a good mate. 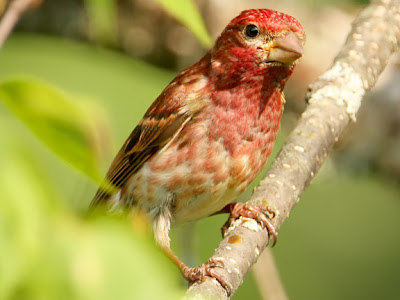 When I first spotted this bird I was not too excited because I thought that it was a house finch, which are fairly common through out most of the US all year long, but when I took a closer look I noticed that it has no streaks on its flanks. I believe that it is actually a purple finch, which we usually see only during the winter when they migrate south from Canada. Although Orr, MN is not all that far from the Canadian border. 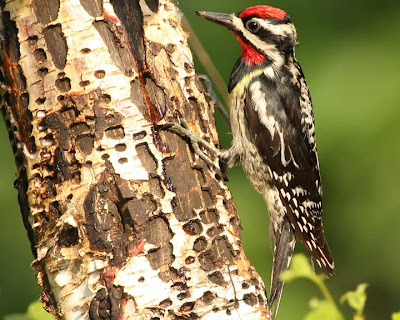 The most exciting bird to watch that night was this yellow-bellied sapsucker. In southern Minnesota we usually only see sapsuckers during migration, but some birds do stop and spend their summer in northern Minnesota. The yellow-bellied sapsucker is the only member of the woodpecker family in the eastern half of North America that is completely migratory. They spend their summers in Canada and the Northern Great Lakes area and winter in the southeastern US, Mexico and Central America. 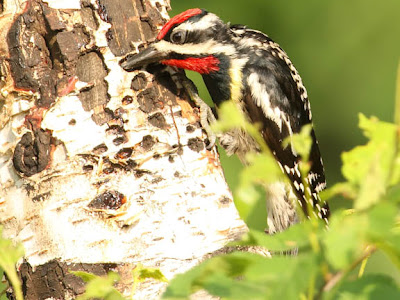 One of the ways that sapsuckers eat sap from trees is illustrated in the picture above. They will make shallow rectangular holes, in the tree, from which they lick up sap with their tongue, if you look carefully at the picture above you can see the birds tongue. These holes must be maintained regularly to maintain the flow of sap. The other way that sapsuckers extract sap is by creating a small deep hole in which it places its bill and probes for sap with its tongue.
Posted by Ecobirder at 3:48 PM

Beautiful sapsucker photo. We were lucky to have yellow-bellied sapsuckers and purple finches nest at Hasty Brook this summer.

All of these are great. Really like the Yellow Bellied Sap Sucker. Never seen one.

Lynne you are lucky to have a great place like Hasty Brook. I usually do not see purple finch any where except in winter and sap suckers are even more rare in the places that I normally go birding.

Thanks Shelly and Leedra, we really liked photographing the sap sucker also. These are our first good pics of sapsuckers.