With fall beginning, and winter just around the corner, I have spent most of my time outside, as of late, photographing dragonflies and butterflies. During the winter here in Minnesota we may see less birds, although we do get to see some cool winter species, but do not have any dragonflies or butterflies to photograph. So I need to make the most of the time that I have left, with the temp getting into the low 40s last night it probably won't be long, to get all of the bug shots that I can. I have been getting some fabulous darner shots lately but the darners will probably be long gone before I catch up and get the pictures posted. 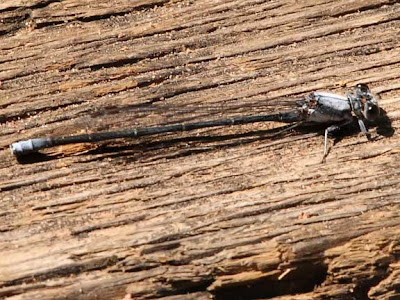 At Crex Meadows I found some insects to photograph while I was there in July. The male powdered dancer damsel fly is the only whitish looking damselfly in the area. The males are actually tan to dark brown in color but change white as they mature due to pruinosity covering most of the body. Pruinosity is a waxy substance that is produced by the cuticle, or outer most layer of the damsel. Pruinosity can be found in many different types of dragons and damselfly and typically effects the color of the insect. 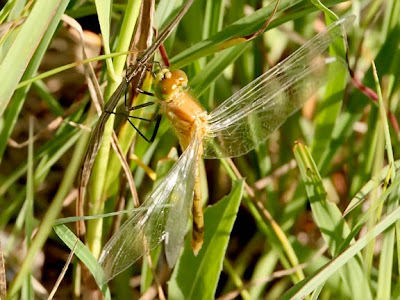 Female meadowhawks, like this one, are also difficult to tell apart. Many types of dragons are sexually dimorphic, which is a fancy way of stating that the males and females of the same species do not always look the same. I know this is a female because there are no male meadowhawks, at least not in this area, that would be that yellow color. 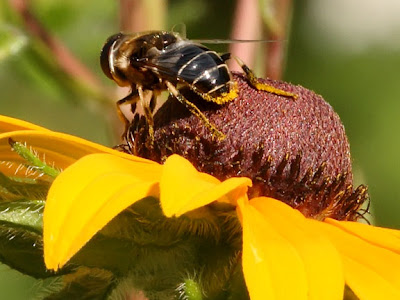 While I was there I also took some pictures of bees. I believe that this first pic is of a baldfaced hornet. Notice all of the pollen, yellow powdery substance, on its abdomen and legs 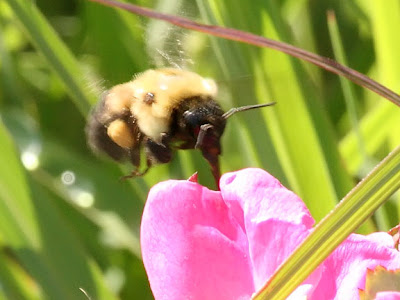 These next shots are of bumble bees. The top one is not too bad considering that the bee is in flight. There are around 50 different species of bumble bees in North America. 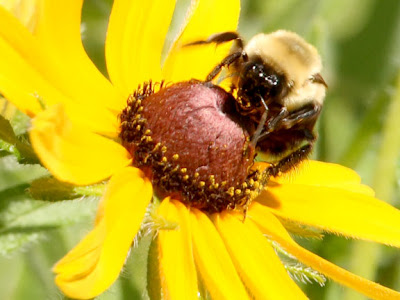 Bumble bees are social bees that are closely related to honey bees. They live in colonies with a queen, that lays all of the eggs, female workers, that gather nectar and pollen as well as do any of the tasks that need to be done, and male drones, which are only there for mating. Unlike honey bees, the bumble bees can not survive in cold weather. So when the weather begins to change the colony dies off and the queen hibernates alone. Then in the spring she will begin a new colony.
Posted by Ecobirder at 10:00 PM

As usual taught me something I had been wondering about. I have so many Bumble Bees. Great photos. Especially like the first 2, they are hiding really well on the wood and dirt/gravel.

These are some great images.

Thanks Leedra, damselflies and very hard to photograph, especially with a long lens. I have recently started working with an extension tube on my 100 to 400mm lens for photographing insects and it has helped me get some better shots.

Might that be a mite on your Bee #2 ...at the pink flower? I wonder

First pict is a fly