Bees are not the only thing that helps to pollinate the plants. Butterflies do not collect pollen, like bees do, but they do also spread pollen when they are drinking nectar from a bloom. With plenty of wild flowers in bloom at the Sax Zim Bog I had plenty of opportunities for some butterfly pics. 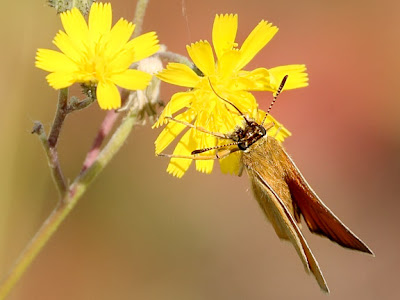 I do not know my skippers very but I think that it is probably an European skipper. 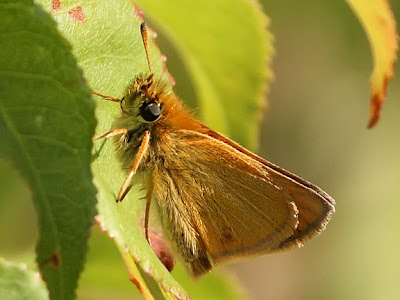 European skippers are fairly common in the north east quarter of the US and Canada, since their accidental release in Ontario, Canada back in 1910. They are fairly plain except for the black line border on the top side of their wings. 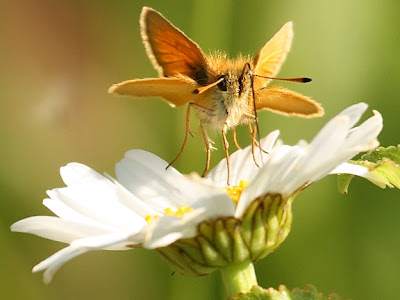 The least skipper is similar in size, color and plainness, but they have a bit more black on their wings and they have a long tapered abdomen. The European skipper has a short fairly blunt abdomen as shown in the second pic. 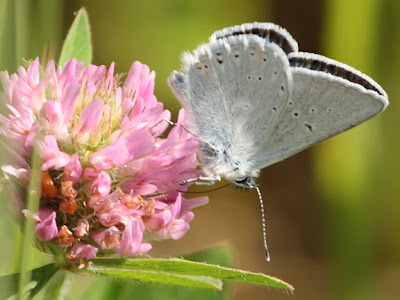 I am always on the look out for blues while out in the fields. There are several variety of blues that can be found in Minnesota but the one that I always hope to see is the endangered Karner blue. Some parts of eastern Minnesota are with in the range of the Karner blue but Sax Zim is a little to far north and west. Most of the blues that I see have orange spots on their lower wing, both wings in the case of a Karner, but this blue only had a hint of orange. My guess is that it is a summer azure. 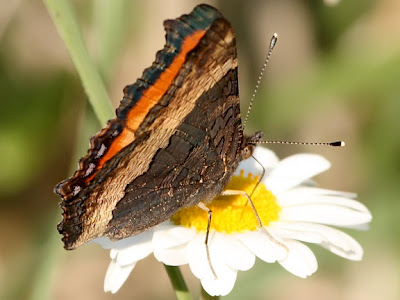 Although I did see my first tiger swallowtail of the year and a few monarchs I did not get any pictures of either of those types that day. It seems that they were more interested in fly then in getting their picture taken. 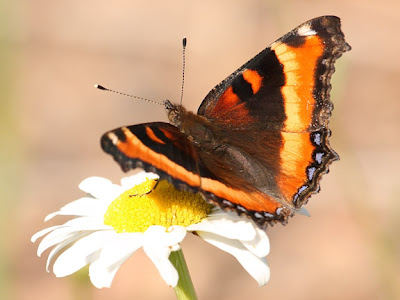 I did find one larger butterfly to photograph, this Milbert's tortoiseshell. The Milbert's torty is common in the northern portions of North America as well as higher elevations. 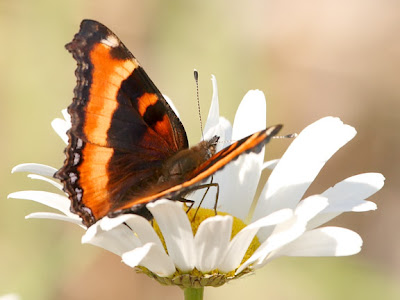 It is sometimes possible to see the Milbert's flying on a warm day during the middle of winter. In fact I photographed this type of butterfly up in the mountains of Yellowstone and the day before snow covered much of the park.
Posted by Ecobirder at 10:10 PM

Hi Jeff, terrific photos of the
butterflies.I especially liked
the Milbert's Tortoiseshell, and
I think you are right about the
skipper and blue. A Tiger Swallow-tail in the Sax-Zim area could
very well be the Canadian Tiger,
which is found there. This is
getting to the northern limit of
the Tigers' range, but there is
some overlap. Nice going!
Hap in New Hope

The colors in tne Milbert are so vibrant, and it looks so good against that white flower.

Thanks Hap. Unfortunately the swallowtail did not stop long enough for me to get a good look, let alone a pic, so you are probably right. Since I do not have a pic of a Canadian swallowtail I am dissappointed that it did not stop. Oh well there is always next summer.