Butterflies at the Bass Ponds

There were a lot of very colorful dragonflies flying around the Bass Ponds over the summer, which was lucky for me because it seemed as though we had a lot less butterflies around this year. The lack of butterflies may have been a direct effect of the late start to spring that we had this year. Many butterfly species have more then one brood over the summer and it seems like the early broods, many of which are caterpillars that hatched the prior summer and over wintered in their larval form, may have been effected by the late winter weather and so less made it to their adult form. 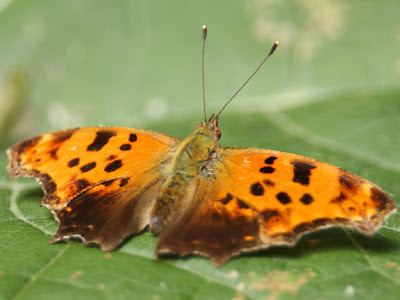 The eastern comma, pictured above, is one of earliest butterflies that we see each year. This is because they hibernate as adults. They spend the winter in a state of suspended animation in a crevice or hollow tree with their wings folded together and head down. In this position they avoid predators, while they are helpless, by appearing to be a dead leaf. 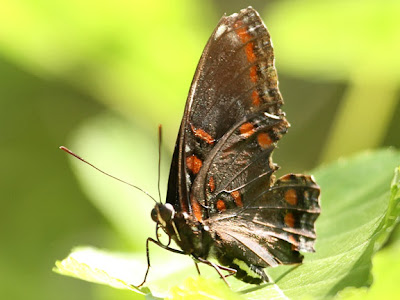 The red-spotted purple is actually a subspecies of the red-spotted admiral. These butterflies over winter as a Caterpillar in a rolled leaf of one of their host plants, which include willow, aspen, hawthorn, birch, poplar, basswood, juneberry, black cherry and apple trees. 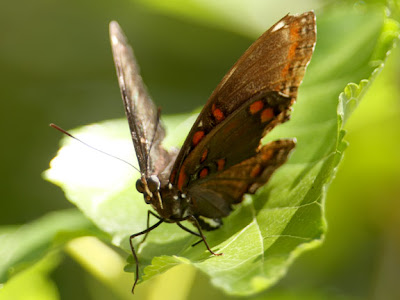 The red-spotted purple resembles the pipevine swallowtail, which is toxic. This mimicry helps the red-spotted purple to avoid predators in the south where their ranges overlap. Up here in the north they are not so lucky and you can see this one has a few pieces missing from its wings. 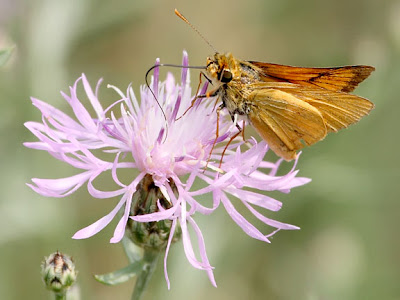 Skippers are always tough for me to ID, I am still pretty new at butterflies, but I think that this may be a Delaware skipper. If anyone thinks that I am wrong please let me know in the comment section.
Posted by Ecobirder at 9:51 PM

I love visiting your blog, I always get to see something new and interesting. I have wondered about the ratty looking wings. Figured what you said here, but also do they start looking bad toward the end of their life cycle.