Birding in the Sax Zim Bog.

The small town of Orr, MN is located on the shores of pelican lake and so was the hotel that we stayed at after visiting the Vince Shute Wildlife Sanctuary. Before we headed on our way to Sax Zim Bog, and then home, I decided to go for a walk on the lake shore while Michelle was getting ready. 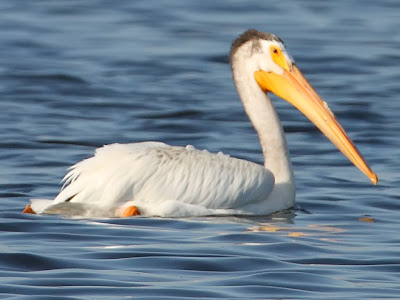 True to its name Pelican Lake had several white pelican swimming on it. One was not too far from shore so I took a pic. There were also quite a few gulls on the city dock that was located down the shore, an osprey that flew close over head but I wasn't able to get a focus on it before it was lost behind some trees and I heard a loon call from across the lake. 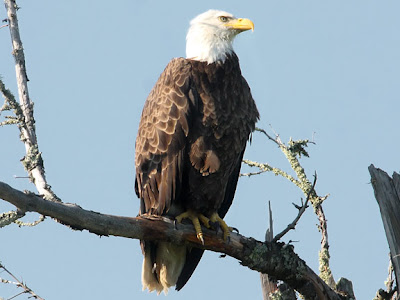 Down in the bog we found a perched bald eagle. Minnesota has the highest population of bald eagles in the US with the exception of Alaska. Eagles are some what fond of fish and with over 10,000 lakes in Minnesota we have enough fish to support a large population of eagles. During the summer they are spread out around the state, but during the winter when the lakes and rivers freeze up they congregate in locations where there is open water. There are several locations in Southern Minnesota where you can view a large number of eagles in one place, during the winter months. 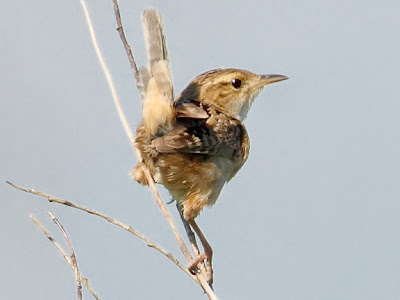 We also found this sedge wren out singing on its territory in the bog. Sedge wrens spend their summers in breeding territories in the Upper Midwest, Great Lakes area and winter in the Southeastern US and Mexico. Their preferred habitats are sedge meadows, hay fields, grassy fields, or marshes. They spend most of their time in the tall grasses and dense sedge hunting spiders and other insects. They avoid predators by running on the ground and hiding in the brush and will only fly a short distance before ducking back under cover.
Posted by Ecobirder at 5:35 PM

Great Eagle photo. Did you see my Crane? They are saying Sandhill, notice my update. I don't know what to think.

Forgot to comment on the White Pelican. We don't get to see the white ones. These are prettier than the brown pelicans.

Like how the sunlight was hitting your pelican and of course loved the eagle! Can you send some more of your eagles to Michigan?! I'm getting to know the spots where some of them congregate in Northern Michigan but still is difficult to find them.

Thanks Leedra, I did see your pic and I agree that it is a sandhill crane. Isn't it a rush to photograph a bird that you have never seen before. White pelicans are more prevelant to the west of us, like in the Dakotas, but there are some in Northern MN and we get some down here in Southern MN during migration. We do not get brown pelicans here but I have photographed them in Florida, Texas, and California so I do know what they look like.

Shelly I wish I could send you some eagles, maybe trade for a few loons for the southern part of MN.