After spring migration most of the good birding here where I live, consists of photographing the remaining bird while they nest or raise their young. While there is certainly not the variety that we get during the spring migration, this time allows us birders to take a closer glimpse at some of the more intimate behavior of our feathered friends. In mid July I spent some time at Wood Lake Nature Center watching the birds and their behavior. 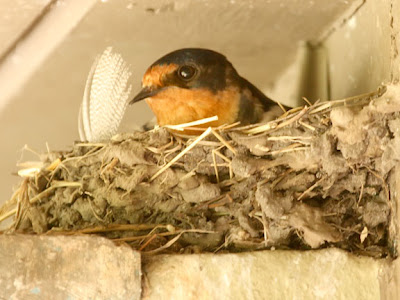 There is always a good population of swallows at Wood Lake during the summer. This population consists of both tree and barn swallows. The tree swallows often take up residence in the bluebird boxes which are located on the prairie on the western portion of the park. The barn swallows like to build nests under the eaves of the visitors center, located at the east side of the park. The barn swallow nest, as shown above, is made of mud pellets, which are collected in the birds beak, and lined with grass. Barn swallows will nest in colonies, with each pair defending a space around its nest, if there is sufficient nesting space. 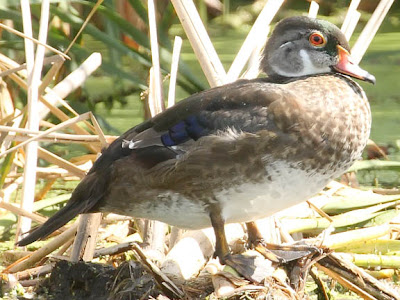 By July the wood duck males had already lost most of their breeding plumage. These ducks typically pair off while still on their winter range, in January, and return as a pair to the breeding range. The male will stay with the female through the breeding season but then find a new mate the next year. In the southern part of their range wood ducks will frequently produce two broods per season. 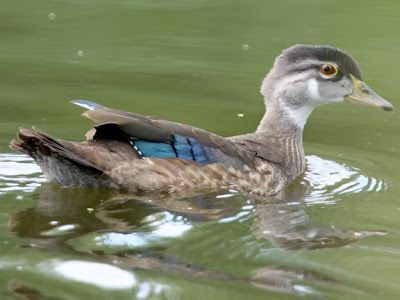 Wood ducks are cavity nesters and will nest in large holes in trees, frequently made by piliated woodpeckers, although any cavity that is large enough will do. Since there is often a lack of natural cavities, wood ducks will often use man made nesting boxes, like the ones that are placed all around Wood Lake. 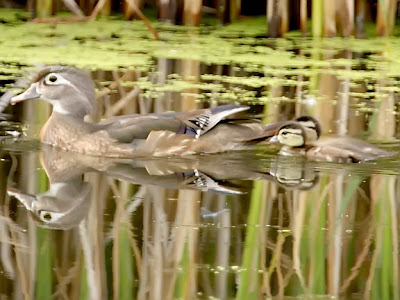 The female will line the cavity, or nesting box with down from her own body to make a soft feather bead for the clutch of typically 6 to 15 eggs, although if wood ducks nest to close together they will often deposit eggs into the nest of a neighboring female. These "dump nests" as they are called can contain up to 40 eggs. After they hatch the young chicks must jump from the nest and follow mom, who does not help them, down to the water. 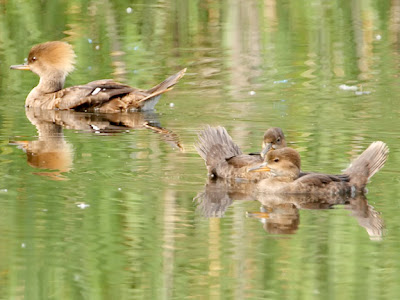 Another type of duck that sometimes use the nesting boxes are hooded mergansers. The hoodies nest very much the same way that the wood ducks do, in a cavity that is lined with downy feathers from the female. The hoody babies are learning how to dive for their food, fish, bugs and crustaceans. They can adjust the refractiveness of their eyes allowing them to have better underwater vision. They also have an almost clear nictitating membrane, second eye lid that birds and some animals posses, which helps protect their eyes while they are under water. The wood ducks just have to learn to dabble across the surface poking their bills under the water in search of seeds, vegetation, bugs and other invertebrates.
Posted by Ecobirder at 8:30 PM

I have never wanted to live in Minnesota (sorry!), but you have so many more bird varieties that I beginning to think I need to at least visit.

Getting the red eye on the female woodduck is a tough one--Nice!

I love, love the wood ducks!

Leedra, there are many of us who do not want to live in Minnesota, especially during the winter time, but the rest of the year is not too bad.

Thanks Hannibal and Shelly.