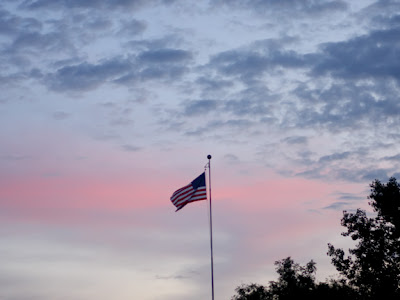 Here is my submission for my second Skywatch Friday. I think it is very appropriate considering the upcoming election in the US. The photo was taken at Lake Como in St Paul, MN at dawn. When I was taking the picture it reminded me of the poem "Defence of Fort McHenry",by Francis Scott Key, which later became well known when it was put to music and became "The Star-Spangled Banner". As the story goes Key, who was watching the bombardment of Fort McHenry from on board a British ship, was elated to see the American flag still flying over the fort as the sun began to rise. Seeing the flag still flying was a sign to him that the American forces had held their ground.

With the way that things are going in the US these days, especially with W in charge, I am pleasantly surprised to see the flag still flying every morning. The problems that we are seeing daily, due in most parts to the Bush administration, are much more dangerous then the bombs that Key witnessed back in 1814.

Oh, so gorgeous! Thank you.

Lovely picture! A flag fluttering against the sky fills one with a wondrous sense.

I too have put up my second post for SWF today.

Always nice to see a picture of the American Flag and remember what it stands for!

Love the sky colors, and we need to remember our heritage.

Wonderful backdrop to our flag!