A couple of weeks ago while I was working my shift at The Raptor Center Leuc, one of the retired bald eagles, decided to take a bath. So I grabbed my camera and took a few shots. 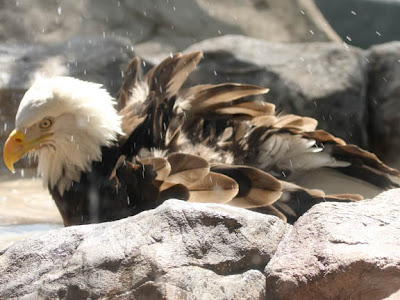 Leuc was hatched in 1979 and came to the Raptor Center with a badly dislocated right shoulder. 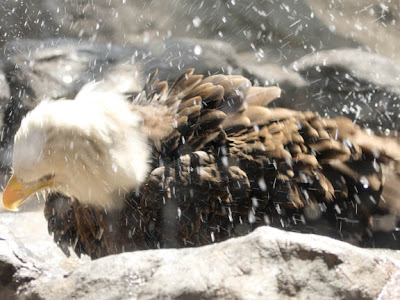 Due to the dislocation he was unable to extend his wing which made him unable to fly. 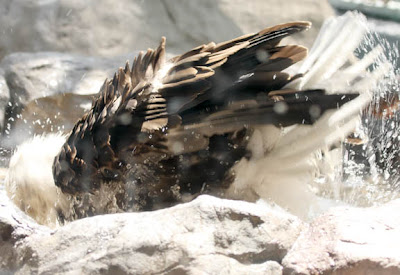 I can certainly relate to his injuries. when I was younger I had an accident on my bicycle and separated my shoulder from my collar bone. Years later I fell on some stairs and when I went to catch myself I dislocated my shoulder. The pain was extremely intense. Since that time I have dislocated it often. The last time that I dislocated it was a few weeks ago while I was sleeping. It does not hurt like it used to but it is still not a very pleasant way to wake up. 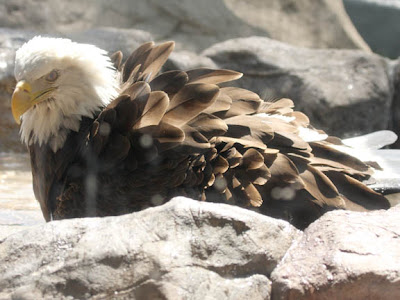 The thing that I really found cool while watching him bathe was the detail and texture of his feathers. 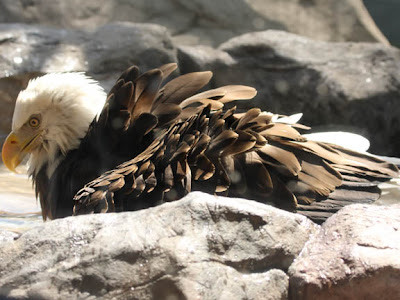 Tomorrow is The Raptor Center's Spring Raptor Release. It will be held at Hyland Park in Bloomington from 11am to 2pm. The weather is not supposed to be real great in the morning but it is supposed to get better as the day goes on. Even if the weather is not that great I am sure that the event will be spectacular. There will be music from Michael Monroe, kids events, our education birds will be there and the highlight will be the release of several rehabilitated raptors back to the wild. If you are going to be in the Twin Cities area tomorrow I would encourage you to stop in. 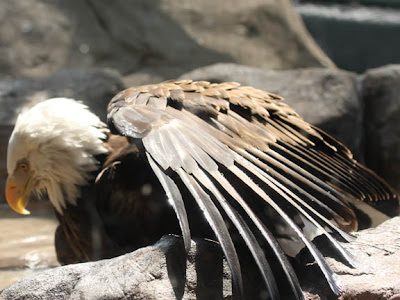 I will be one of the education volunteers at the hawk and falcon circle, so if you do stop by make sure you come over and say hi. I have also been asked to take some pictures so I will be trying to do some double duty. Hopefully the weather will not be too bad and I will be able to get some good pics.
Posted by Ecobirder at 5:04 PM

Great photos!
This creature looks so proud of itself with all its feathers raisen.

Hey, are you familiar with the nesting pair of Bald Eagles on the north side of Keller Lake. They can be seen daily from HY 36. Right now with the flora still waiting for spring warmth the view of the nest is unobstructed. I'd have to believe you could get some great shots - you are a hellva photographer!