Friday, May 15th, the day that we were out at Medicine Lake was kind of an anniversary for me. It was one year, from that date, that I was diagnosed with diabetes. I think that it was one of the reasons that our 2007 Yellowstone trip did not go as well as other Yellowstone trips. Taking insulin and trying to figure out what I could eat and what I couldn't and how much complicated things a bit. This year it was not a big deal at all. Probably because I pretty much have things under control. Since I was diagnosed a year ago I have lost 20 pounds, which is not bad considering that I was only a little over weight to begin with. When I was diagnosed my A1C, a test that measures the average of your blood sugar level over the past several months, was at 13.9. Since you are supposed to be under 7.0 mine was pretty high, which is why they put me on a 24 hour insulin as well as pills. On my last visit my A1C was 5.4. Along with the drugs I have altered my diet and I am getting more exercise by hiking through parks chasing after birds and other wildlife with my camera. That Friday we also saw quite a few birds in the fields that surround Medicine Lake. 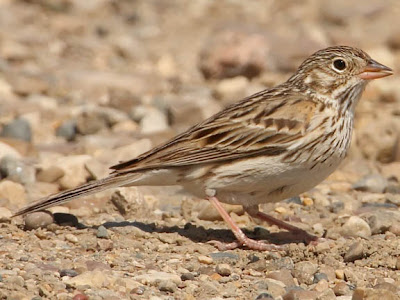 I am not really great with my sparrow identification so someone please correct me if I get one of the sparrows wrong. I believe that the one above is a vesper sparrow. 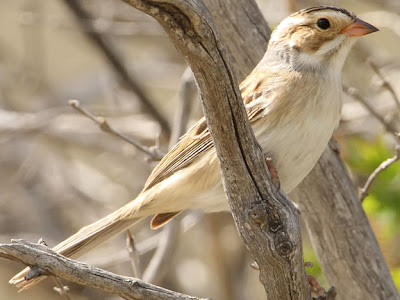 I think that this one is a clay-colored sparrow. Sparrows are the hardest type of birds for me to ID. They are all small and mostly brown with very subtle differences. Maybe after shorebird class later this summer I can find a class to help me better ID sparrows. 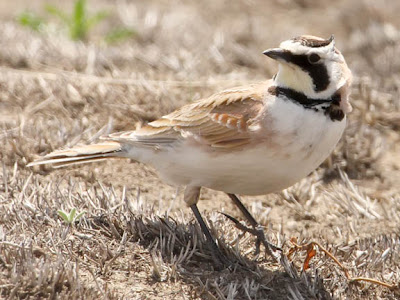 We have horned lark here in MN but mostly I see them from a distance on the side of roads during the winter. This horned lark let me get some nice shots. 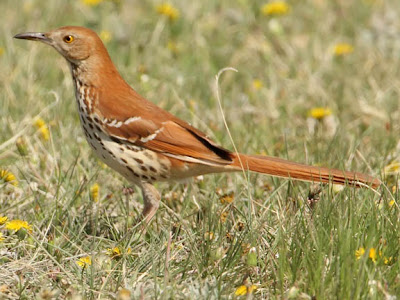 Brown thrashers are a bit more common in the eastern US. The 3 or 4 that we spotted at Medicine Lake were in the western part of their typical range. 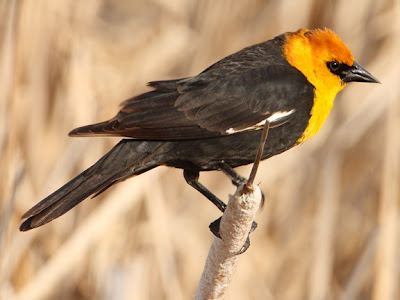 Once in a while we will spot a yellow-headed blackbird mixed in with red-winged black birds in the eastern portion of Minnesota but they are more common in the western half of the state. Out in Montana there were more yellow-heads then there were redwings. 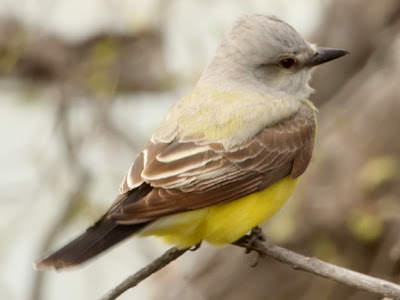 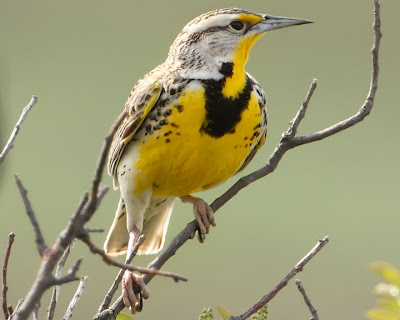 We saw, and heard, quite a few western meadowlarks in the park and most of the places which we traveled through in Montana. In eastern Minnesota we can see either the eastern or western meadowlark, but these days, with most of the large open field being devoured for development, I rarely see either type. It is too bad because it was really nice to hear them singing as we were driving down the road.
Posted by Ecobirder at 10:04 PM

Hi Jeff, Congratulations on your
fight with diabetes!!
I agree with you on the sparrows,
and did you notice how pale that
Horned Lark is? Has to be one of
the western races (Prairie?).
Most of them around here have much
more yellow in the face (Northern).
I have been enjoying your Montana
show very much. Thank you!
Hap in New Hope

Nice pictures Jeff!
Did you have a chance to look for an Rosy Finches?
Black's can be found at the top of Bear tooth pass y'know.