Medicine Lake NWR is on the edge of what is commonly referred to as the Prairie Pothole Region. The Prairie Pothole Region is an area of grasslands that is filled with many small depressions, or potholes, which were left as the glaciers receded across North America 45 million years ago. In the spring these potholes form ponds and wetlands when they fill with run off from the melting winter snow. These shallow wetlands are perfect habitat for millions of dabbling ducks as well as shorebirds.

With the area being dryer this year, then it was last year, there were not only less waterfowl around to photograph, but we also saw less shorebirds then last year. 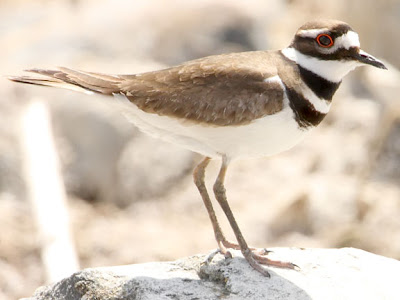 We did find a few killdeer, both in the fields and on the shoreline of some of the lakes. 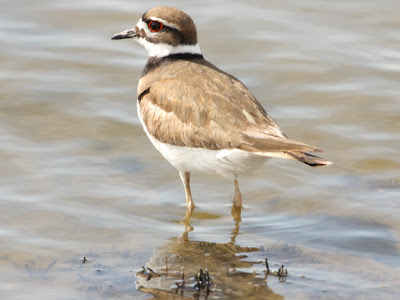 The killdeer is one of the most widespread and successful shorebirds around. This is probably due to its willingness to share habitat with man and nest close to people. The nest is typically just a scrape in the ground and the killdeer will often defend the nest from predators by faking a wing injury and luring the predator away from the nest. 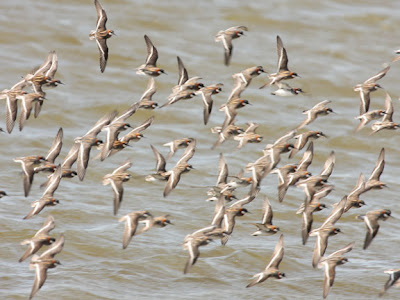 There were also a good number of Wilson's and red-necked phalarope. It was fun to watch them fly together. The way that they seemed to move in unison, all changing direction together in what appeared as one motion, made the 50 to 100 birds appear almost like a single entity. 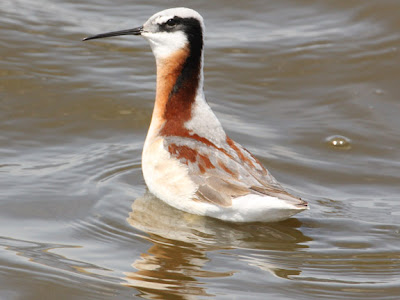 The Wilson's phalarope breeds across the west and central portions of North America and winters in South America. During migration between the wintering and breeding grounds they gather at staging areas like the Great Salt Lake and Mono Lake. Declining numbers at these staging areas, over the past 20 years have prompted the Audubon Society to put the species on their watch list. 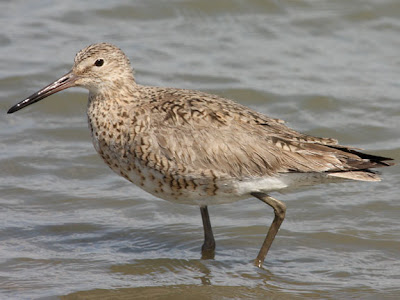 There are basically 2 different populations of willets in North America. The eastern willet are smaller with stouter bills and are strictly coastal all year long. Western birds are larger. They breed in freshwater in the west central United States and southern Canada. During the winter months they will migrate to their wintering grounds on the east or west coast. 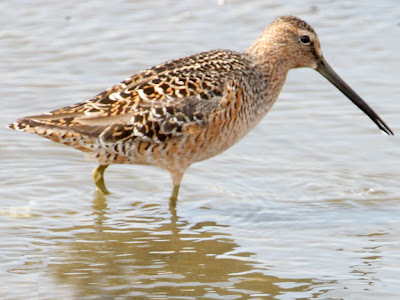 Long-billed dowitchers can often be seen in the western portions of the US during migration. They migrate from their wintering grounds in the southern coastal regions of the US and in Mexico to their breeding grounds in northern Canada and Alaska. At the breeding grounds it is the male, and not the female, who takes care of the chicks after they hatch. Now there is someone who really deserves a Father's Day card. 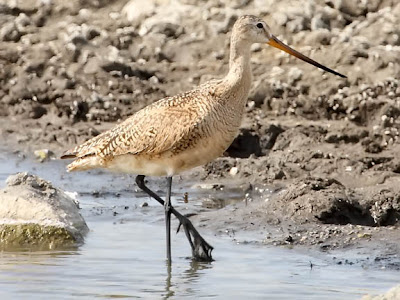 Marbled godwits breed in Montana, North and South Dakota and southern Canada. They spend their winters in the coastal US and Mexico.
Later this year, in August, I will return to the Prairie Pothole Region, this time South Dakota, to do an intense shorebird identification workshop. As always I will have a camera with me and hopefully I will bring back a lot more shorebird photos to share from that trip.
Posted by Ecobirder at 3:53 AM

Hi Jeff, great bunch of photos.
That is a beauty of a Wilson's
Phalarope on the water. Gotta tell
you tho, I believe that large
flock of flying phalaropes is a
bunch of Red-necked Phalaropes.
I've been enjoying your blog for
some time now. Keep up the good
work!
Hap in New Hope

Thanks for the heads up Hap.