Last Saturday was The Raptor Center's annual Spring Raptor Release. I volunteered to help out answering questions in the hawk and falcon area and also said that I would take some pictures of the event for the Education Marketing and Events Manager. I was a little worried the day before when I read that the weather report was calling for rain and possibly snow until about 1pm the day of the event. I don't mind the weather but I don't like to have my equipment out when it is to wet and since the event was being held at Hyland Park in Bloomington I knew that I would have to carry my camera for the whole time. So I decided against bringing my new lens and went with my old stand by. As it turns out it did not matter because that morning the sun came out and we had a nice, albeit a bit windy, day.
When I arrived almost everything was already set up, except for the birds themselves. They stayed crated until almost 11am. Above Adam and Emma are taking out Jack, a male American kestrel, so that he can be set up on his perch. 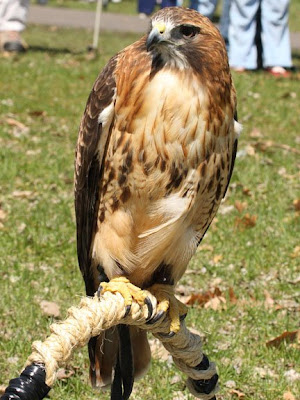 Some of the other birds in our hawk and falcon circle were Jamaica, a female red-tail hawk, 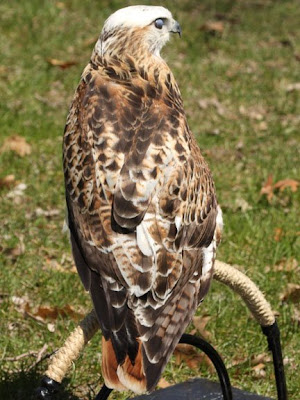 and Casper, a Krider's red-tail hawk. We also had the new broad-wing hawk out, who just got named Kettle, but they put him away mid way through the event before I could get his pic. 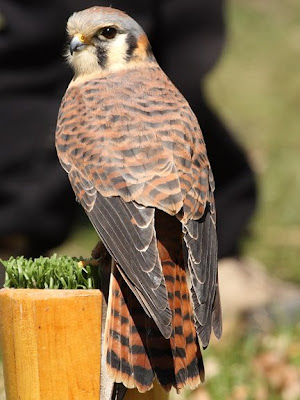 The other half of our area was where we had falcons. Besides Jack from the first pic we also had Cinnamon our female American kestrel. 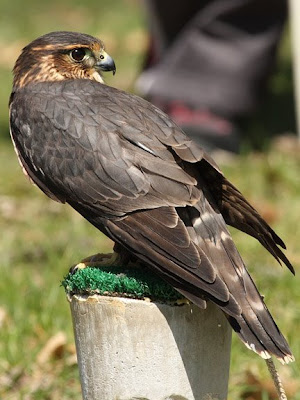 Taiga, a female merlin falcon, was there. Taiga is one of my favorite birds at The Raptor Center. She is very cute and sometimes lets out a small cry when she gets fed. She is also the slowest eater of all of the education birds. 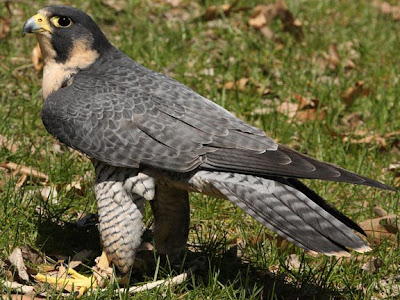 Juneau rounded off the hawk falcon area. Juneau is a female peregrine falcon and my adopted bird for last year. 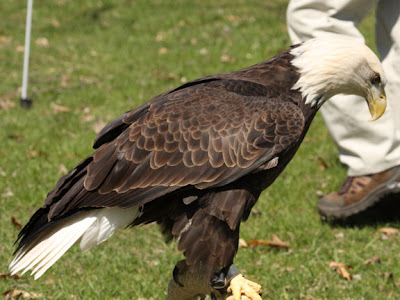 There was also an eagle area which consisted of two bald eagles, Maxime and Othello, and our resident turkey vulture Nero. 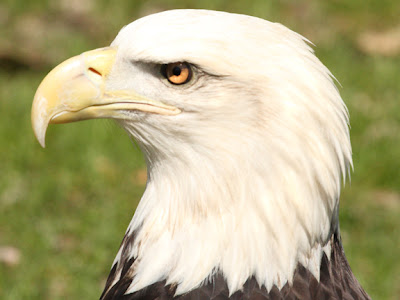 Maxime is our only female bald eagle and at a whopping 10 pounds she is huge compared to Othello or the rest of the boys, Othello weighs in around 7 pounds. 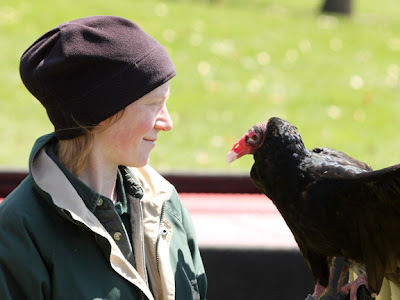 They did take Nero up to the stage to help in some of the educational programs that they were running through out the day. It is a good thing that Nero is used to Laura, turkey vultures vomit as a defense mechanism and from what I hear it is extremely smelly. 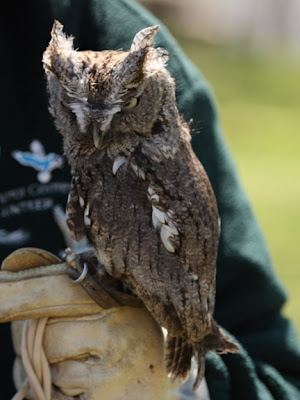 There was also an owl area. Squeek, the eastern screech owl pictured above, and Borius, our boreal owl, both came out for the program. We had to set up a couple of hutch type perches for them. 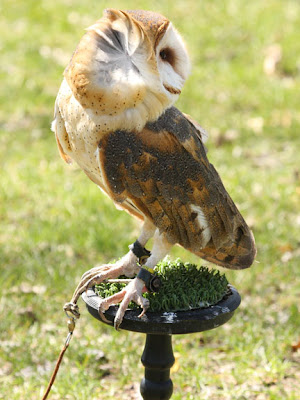 Whisper the barn owl was probably eaves dropping on all the little rodents conversations in the area. Barn owls have better hearing and night vision then most of the other owls. 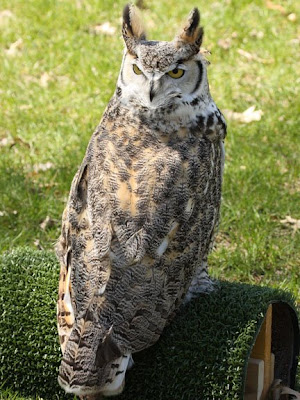 Samantha is our largest great horned owl and during mating season she was a bit temperamental. 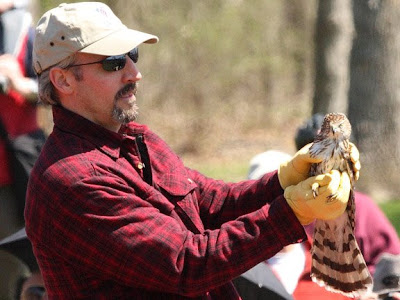 We released 3 birds back into the wild that afternoon. The first was a coopers hawk. The gentleman releasing the bird was picked by a random drawing at the event. 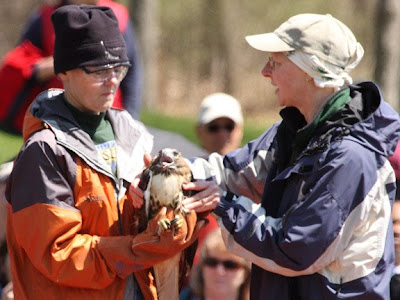 The next bird to be released was a red-tailed hawk, who was being released by a contributor. 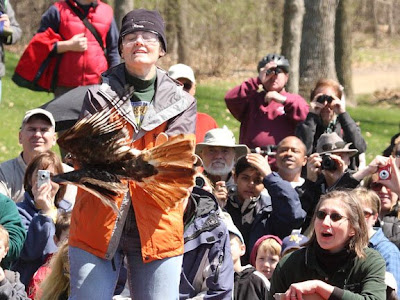 Unfortunately the hawk baited on her before the release. 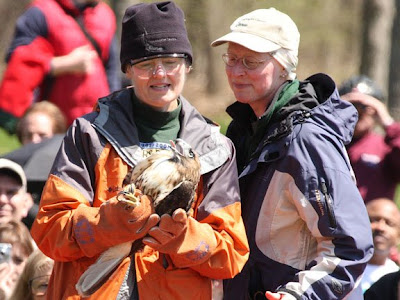 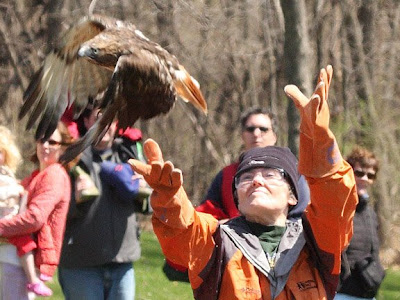 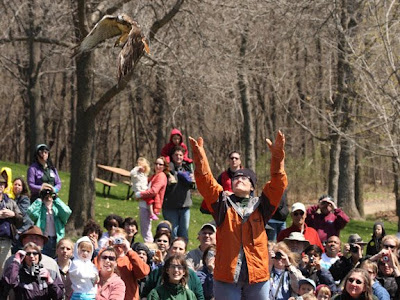 and off it flew. 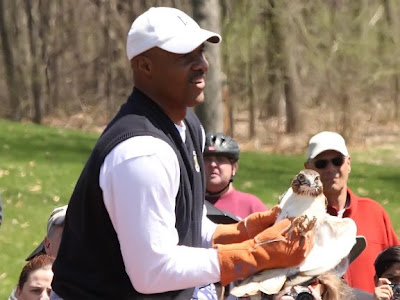 The last bird was another red-tailed hawk and it was released by retired Minnesota Viking Matt Blair. 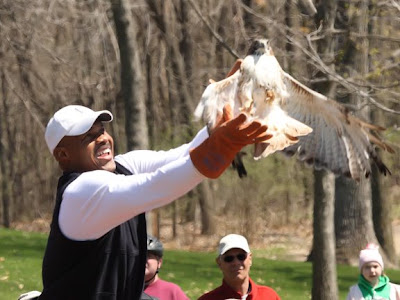 Matt works with The Raptor Center on one of their big fundraisers, The Raptor Bowl. In appreciation for all his help Matt got to release the final bird.
The event was a huge success. The weather was great and we had a huge crowd. The next release will be in the fall I believe at Carpenter Nature Center. I am sure that I will volunteer for that one also because I have a lot of fun talking to people about the raptors.
Posted by Ecobirder at 7:35 PM

Really enjoyed your posting, seeing the close-ups of birds we usually only see from afar.

Very cool post Jeff. What do you mean by adopted bird for a year?

Those are great pictures!! As far as I know there are no programs like that over here :(

Thanks everyone for your nice comments. Lynne the adopt a raptor program is one of the ways that The Raptor Center raises money. You give them so much money, depending on the bird, and you get a certificate and picture and some other fun stuff.