On April 21st I stopped at Dodge Nature Center on my way home from work to do some birding and take some pics. I did get some bird pics, which I will share on my next post, but I was more excited to get my first dragonfly pics of the year. 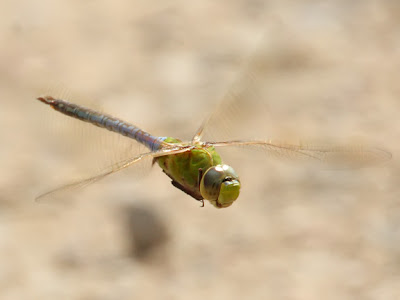 I have been seeing quite a few common green darner dragonflies on my adventures as the temps have increased. Green darners are large dragonflies that are strong fliers. I typically see them flying over ponds or fields on the hunt for mosquitoes or other small flying insects. The difficulty with photographing green darners is that they often fly for a long time, and they can fly for quite a distance, so finding one that has landed can be difficult. Even though this darner did not land for me I got lucky and it decided to do some hovering. It took me a while to get it in view and get the lens focused before it moved, especially since most of the work that I do is using manual focus, but eventually I was able to get some pics of the darner in flight. 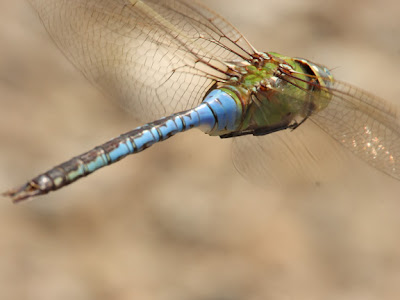 Green darners are very similar to birds in many ways. These dragons migrate south much the same way that many birds do. In fact researchers at Princeton found that they exhibit some of the same traits that birds do when they migrate, such as migrating during a cold front with favourable north west winds or skirting large bodies of water during migration. Now they have returned to their summer breeding grounds and they are hunting for food and soon they will begin mating, much the same way that migrating birds are.
Posted by Ecobirder at 4:10 PM

Nice ones. I've seen a few dragonflies around but not in any large numbers yet. Of course, the mosquitos they feast upon aren't out yet either, so its an alright tradeoff.

Scott, I love photographing dragonflies but I certainly could live with a lot less mosquitos.

Wonderful pictures. You must have a lot of patience to get dragonfly shots.

As they say in the White House: Awesome, dude!!!