Since today is the last day of 2008 I decided that it would be a good time to take a look back through all of the posts that I have made through the past year. Even though it was quite a bit to go through, 385 posts in 2008 not counting this post, it was fun to go back. Each post and pic has a memory behind it and looking back brought up many of those memories and it made my day. There have been times when I have been overwhelmed by all of the work that goes into maintaining this blog. At times I have wondered if it is worth it, but going back and reliving the memories of all of the adventures that I have had in my quest to bring you, my readers and my friends, interesting quality pics on a daily basis, I would not change a thing. So to celebrate the end of 2008 and the beginning of a brand new year of possibility I give you my top 10 pics of 2008.

10) 2008 was a great year to photograph warblers here in south east Minnesota. The spring migration started off later then usual, mostly due to winter hanging on for so long, but it also lasted longer then usual. So we ended up with around a month of warblers migrating through. This pic was one of the first that I got of a blackburnian warbler making it a lifer for me, I do not count a bird on my life list until I have a pic. 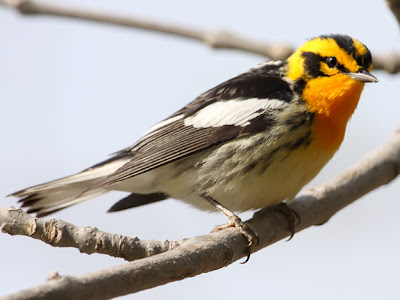 9) One of the best action pics that I took last year was this eagle fishing in the river near Prescott, WI back in January of 2008. The eagles gathering around open water in southern Minnesota during the winter time is what really got me started into wildlife photography. 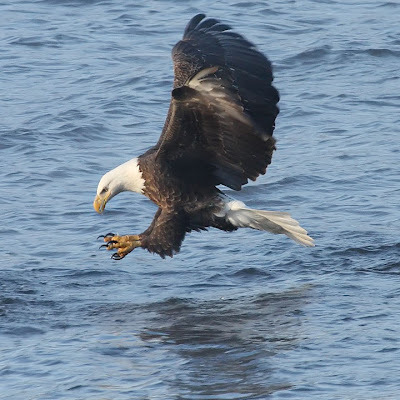 8) I have photographed a few kestrels over the years but this fellow that I photographed in Yellowstone is the only one that was good looking, close, in good light and not on a telephone line. 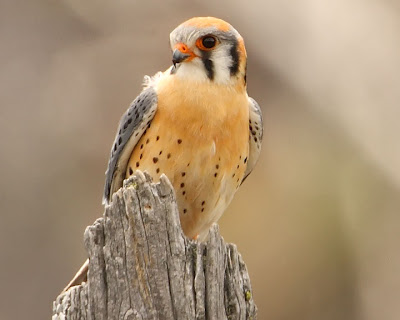 7) In 2008 I traveled to South Dakota to participate in a shorebird workshop. The workshop was great but I got a bonus when I got to photograph a burrowing owl that was regularly visiting a field in the area. 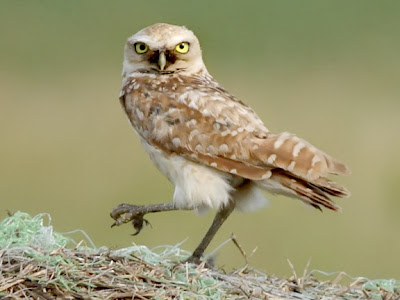 6) In 2008 I had an opportunity to photograph many new species that I had not photographed before. Some of these species were so rare that they are on the Federal Endangered Species List. This is the case with the endangered Karner blue butterfly that I photographed at Necedah NWR in June. 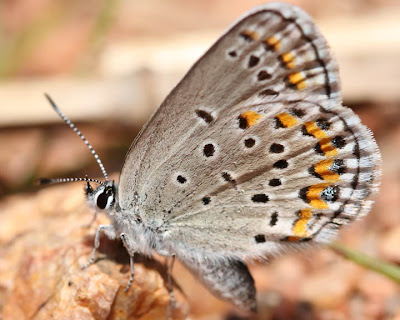 5) On a return trip to Necadah NWR in October I got the opportunity to photograph another endangered species as a pair of whooping cranes flew over head. 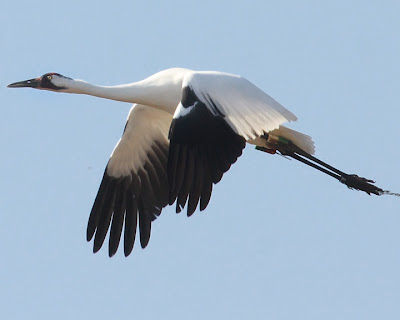 4) In the winter of 2007-2008 I made numerous attempts to find and photograph a snowy owl that was wintering at the MSP airport. Unfortunately my timing was always off and I never saw the owl. This year I have seen more then one snowy at the airport including this one that was nice enough to pose for some close ups. 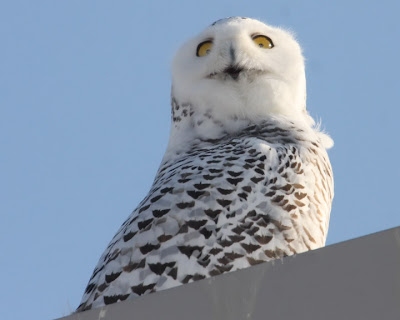 3) In 2008 I expanded my collection of dragonfly images by quite a bit. After dabbling in 2007 I got quite serious in 2008 and scored a few pics of the dragon that was on the top of my most wanted list, the calico pennant. 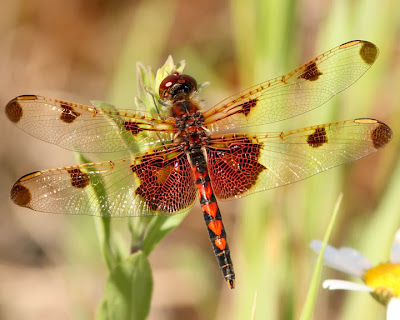 2) The most exciting lifer that I photographed in 2008 came during our Yellowstone trip, and it was not a bird. After eight trips to Yellowstone, and many trips to northern Minnesota, I finally was able to see and photograph a wolf up close and personal. 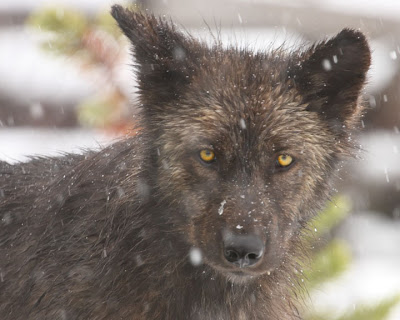 1) The number one pic was one of the few pics to grace the blog that were taken by me. This pic was taken by my wife Michelle and it is a pic a me holding an immature eagle that I was about to release. This picture is my favorite because it brings back very strong personal memories and feelings. This was the eagle that I rescued out of Crex Meadows in August of 2007 and was able to release, through The Raptor Center, down at Redwing, MN in February. 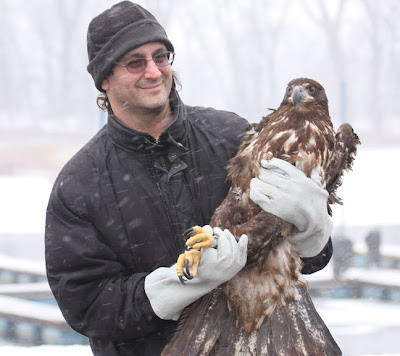 Well I hope that you enjoy reading this post as much as I enjoyed putting it together. Let me know what you think or if you have a favorite pic that was not on the list please list it in the comment section.
I would like to thank you all very much for your support of the Ecobirder blog in 2008 and hope that you will come back and visit again in 2009.
Posted by Ecobirder at 3:51 PM

Wow - great retrospective and a spectacular collection of photos!
Lookin' forward to another great year from Ecobirder.
Cheers!

Your photos make my eyes tear up, they are so wonderful. I'm looking forward to seeing what you capture and share in the New Year. I hope to run into you again in 2009!

I'm with Lynne - I feel a little teary too - all so wonderful! I was hoping that wolf photo would make it into your top 10 pics - that really stuck in my mind on how exciting it would be to see.
Happy new year!

This is the first time I have seen the full photograph of you and the Eagle you released. It really shows how large he is right there up against you. Awesome to rescue him and then to get to release him.

Most (but not all) of the top 10 have posted since I started visiting you and I really enjoyed re-visiting them. Hard for me to pick a top one. You did a great job with the post. It is a wonderful idea, but I can't even imagine the time involved in it.

Happy New Year to you and Michele.

Absolutely a great collection. My favorite (kestrel) only made it to #8. Looking forward to all the great pictures I know are coming in 2009.

Your record is very impressive and I have loved your blog since first I came across it. I only started this caper at the end of June so many of your pics were new to me.The most impressive photo, or part thereof, for me is your face as you hold your rescued eagle. So much joy, care and love emanates from it, it brings tears to my eyes.
Keep up the good work, I ook forward to enjoying lots more of your postings.

All these are wonderful. It would be hard to pick a favorite. Thanks for sharing. Happy New year to you and Michele.

Great photos! I think my favorite of this group is the burrowing owl.

What a fantastic year you experienced! I really loved the shots of the owls and that kestrel! Snowy owls are on my "most want to see list!". Really fantastic photos and I'm glad you share them with others like me who can't get those wonderful close-ups :-)

Excellent set of pictures. I have never seen a Whooping Crane. Kestrels are one of my favourite birds and your capture is a beauty.
Happy New Year.

I LOVED this post! I plan to become a regular reader of your blog. It is inspiring to think about choosing ten best photos! Your birds are gorgeous! June

Very Nice post. I love all the photos and I don't blame you for picking the one of you and the hawk as your favorite. I loved them all, but the birds are my favorite and each is spectacular in its own way. The eagle with talons extended is magnificent, but so is the whopping crane. And, I love the snowy owl. Good luck with your nature photography this new year and keep on blogging! I know it is a lot of work and I get tired sometimes too, but after a short break my energy comes back and I have so much fun. I love meeting all the new people and it thrills me to no end when someone else enjoys what I've written or photographed! Plus, it's a great way to keep in contact with all my family and friends from around the country!

Your photos of 2008 are exceptional! Happy New Year and great luck for 2009! (The kestral was gorgeous, along with all of your choices but I had to single him out because of the unusual coloring...Juvy?)

What a great collection of pictures. Those shots are hard to get!