Established by an Act of Congress back in 1924 the Upper Mississippi River National Wildlife and Fish Refuge stretches 261 miles miles across 4 states and covers 240,000 acres. The refuge is divided into 4 different districts with 14 pools contained with in the districts. 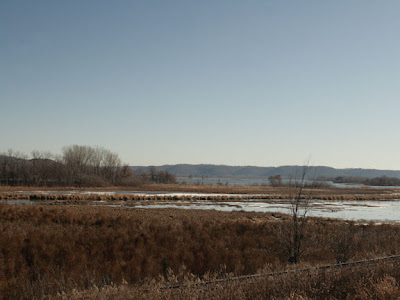 The pools and waterways, plus 48,000 acres of marsh habitat, 51,000 acres of floodplain forest, and 5,700 acres of grassland, are home to more then 600 species of plants. Over 40% of waterfowl in the US use the area, which is a part of the Mississippi Flyway, for migration, with 50% of the world's canvasback ducks staging on the refuge. There are also large populations of bald eagles that nest on the refuge as well as 15 nesting colonies of great blue heron and common egret with over 5,000 birds. The refuge also supports many different types of fish, mammals, reptiles and amphibians. 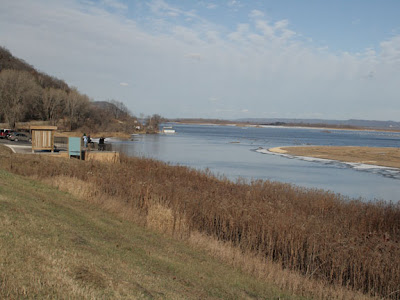 The refuge is way to large to cover in one edition of My World so I would like to concentrate on a small portion of the refuge that I like to frequent at this time of the year. Down in the La Crosse District, not far from the Minnesota and Iowa border, sit pool 8. 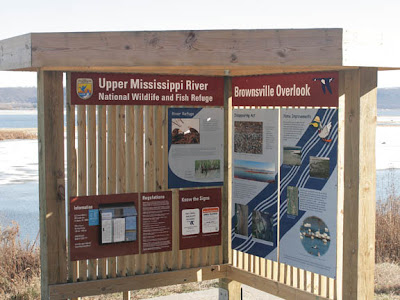 On the Minnesota side of pool 8 a new overlook was constructed back in 2007. This overlook is located along highway 26 just south of Brownsville, MN. This facility, which consists of an observation deck with interpretive signs and an information kiosk as well as a retaining wall and parking, overlooks lower pool 8 and the Wisconsin Islands Closed Area, which have been very successful at attracting large numbers of waterfowl, each fall, due to successful habitat restoration projects and water drawdowns in 2001-2002. 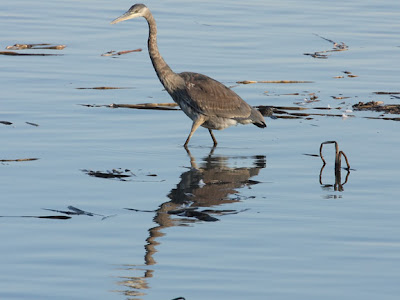 Water level management by the US Army Corps of Engineers has become necessary at the Upper Mississippi NWFR because the series of locks and dams on the Mississippi River, which are used to control water levels for commercial boat traffic, have created higher water levels in the backwaters and pools. This higher water effected many of the aquatic plants which were necessary for acceptable habitat for many of the fish and waterfowl. The increased water levels also effected wading birds such as the great blue heron. 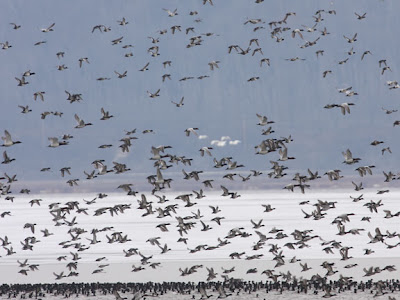 Since the drawdowns in 2001-2002 many of the aquatic plants that require shallow water have made a come back. This has helped increase the number of waterfowl in the refuge. During the fall even greater numbers of waterfowl appear in the shallower waters of pool 8 to stage for their migration south. Flocks, often numbering into the thousands, of mixed ducks can often be seen on the water until it freezes up. 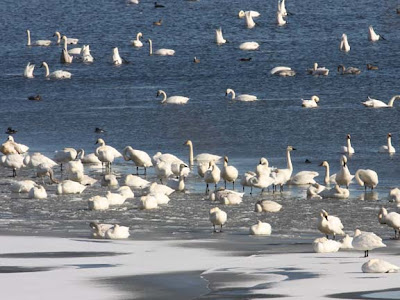 The Army Corps of Engineers has also spent time building up many of the islands in the pool which were eroded away when the water was higher. The islands are often enlarged by ice as the temps begin to get colder. 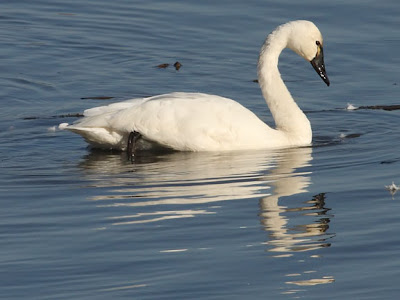 The highlight of the fall migration, down on pool 8, is when the tundra swans stop over on their trip from their nesting territories up on the northern Arctic coast to their wintering grounds on the east coast. This is cool not only because of the number of swans present, 20% of the eastern population of swans stage in the refuge, but because we do not often get to see tundra swans in Minnesota. 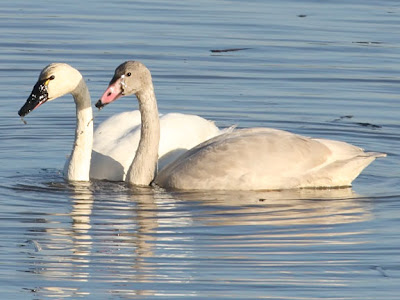 Tundra swans breed up on lakes, ponds and pools on the tundra up along the Arctic coast. Their nest is bowl shaped and made up of vegetation lined with down. The nest is typically placed on a mound or other incline in the tundra. Adult swans will defend their nest from smaller predators, like foxes, weasels and other birds, when larger predators, like bears, wolves or people, show up the swans will leave the nest so that it is more difficult to find. 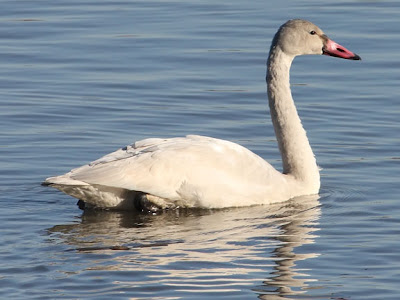 Young swans, called cygnets, are born as little balls of down with their eyes open. Within 24 hours of hatching they will leave the nest and will already be able to feed and swim. By the time that they are ready to migrate south the cygnets will almost be as large as the other adults. They are still easy to identify however, because they are more grey in color then the older adults and have a pink bill. 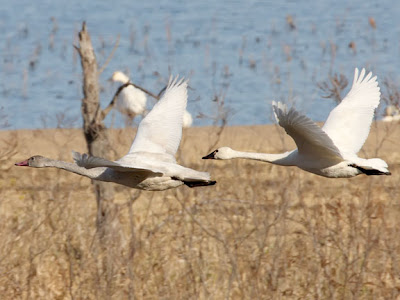 The tundra swans are smaller then the trumpeter swans that breed in the area, but it is difficult to tell the difference by size since it is not very often that I see them together so that I can compare size. Fortunately the tundra swans do have a yellow triangle shaped patch on the side of their bill which trumpeters do not so if they are close enough it is rather easy to ID which type that you are looking at. 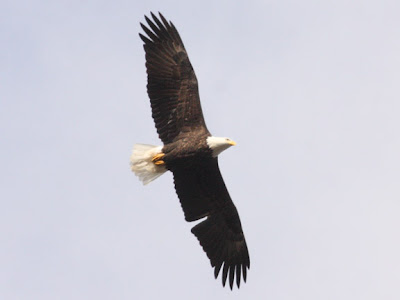 At this time of the year there are also a lot of eagles circling the skies above pool 8. Eagles are partial migrants, that means that they will not migrate unless they lose their food source. Since most eagles eat a lot of fish they need to migrate when the lakes and river begin to ice over. Many of the eagles from central Canada, northern Minnesota and Wisconsin end up on parts of the Upper Mississippi NWFR that do not freeze during the winter. 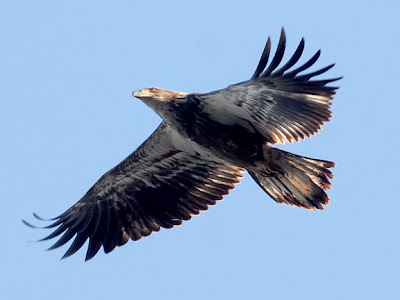 There are also a few golden eagles that winter in the upper Mississippi River Valley in southern Minnesota and Wisconsin. Golden eagles are much more rare and most people who think that they see them are actually seeing immature bald eagles, like this one, who do not get the white head and tail until they are about 5 years old. 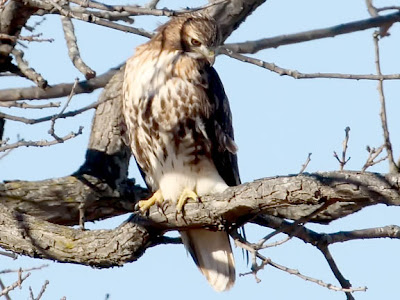 There are usually other raptors around besides eagles. Red-tailed hawks are often seen along the road side at almost any time of the year. Although they are not usually seen there are probably also great horned owls in the area. 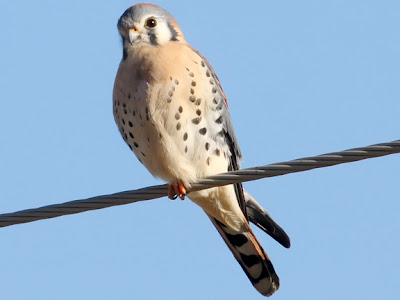 American kestrels are also partial migrants. Many of the kestrels will leave the area and head south when the cold winter weather begins. They will eat the larger dragonflies, who are also migrating, on their trip south. Kestrels eat a variety of prey including birds, rodents, reptiles, amphibians, and insects. Since many of these food types are not available during a Minnesota winter, reptiles, amphibians, and insects, there is less food available so some kestrels will leave for better hunting areas in the south. But not all kestrels will leave. Some will stay in the area and live off of rodents and small birds

Wow, what beautiful photos of the birds!

I love the pair of swans swimming, and the ones flying. But they're all lovely.

The American Kestrel is a new bird for me; thank you for sharing such fascinating information along with gorgeous pictures!

Must be heaven to watch nature over there. Beautiful photos you showed again.

A wonderful post, I enjoyed reading every word and of course your stunning pictures.

ature at its best.

This my kind of world, wild birds and water.

Wow! Great photos and narrative. I want to visit and see this part of your world for myself - it's wonderful.

What incredible pictures and your narrative taught me things I did not know. I am new to birding and don't know much about water birds so I appreciate posts like this where I can learn more about them. The bald eagle picture is fabulous. I can't get over its wing span.

What a wonderful place and pictures, love the shots of the swans.

Thank you for making me a little "smarter" - I love all the information you provide with the photos. The swans were beautiful.

wonderful bird pix...especially the kestrel! he is great.

Beautiful photos. Great tour. I really like the swans.

I sit here looking and reading in awe, especially when I got to the shot of how many birds there were. What a place this must be to visit. Thank you so much for sharing this.

Awesome photos and story, Ecobirder! Thanks for all the information on this wonderful SE MN birding area.