This is the time of the year when bird watching in Minnesota can get to be difficult. First of all many of the birds have migrated south for the winter and most of the fun winter species have still not made it this far south. Then there are so many days of skies filled with gray clouds, that type of light makes it hard to photograph anything. Don't forget cold temps and snow which require gloves and lead to fogged up glasses which also do not help when you are trying to get that great shot. But it is also this time of the year when I rediscovered my love of nature and began this adventure in birding and wildlife photography. 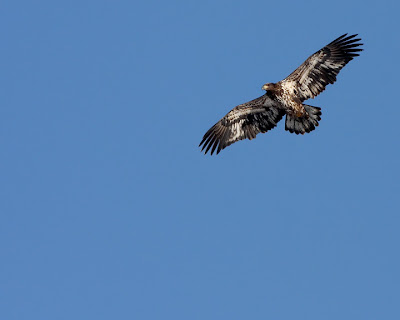 Minnesota has a very healthy population of bald eagles. This was not so when I was younger but because of federal protection and the ban on DDT eagle populations have been increasing each year. In Minnesota, during the warmer months of the year, the eagles spread out across the state. You can usually find some at each of our many lakes and rivers. However, during the winter they congregate where ever the water does not freeze. This gives us several reliable spots where you can see eagles in good number during the winter. Back in 1999 I made some big changes in my life. I left retail sales and left my small entertainment business and went to work at a corporate job. This allowed me a luxury that I had not had since I was a kid, time. Time to enjoy life, and to enjoy nature again. It was at about this time that I found out about the eagles that gathered on the south Mississippi River at this time of year and after my first visit I was hooked. 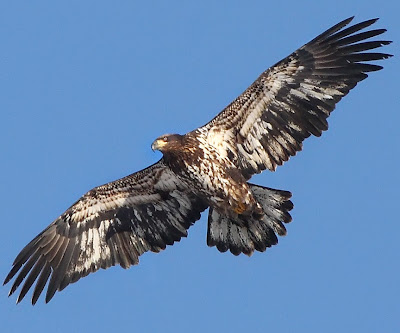 Since that time I have made many visits down to the river during the winter to photograph the eagles. This picture was taken early this year at Colvill Parkin Red Wing, MN. Both pictures are the same except the second is cropped in on the eagle. When you see pictures of clear blue skies like this taken in Minnesota during the winter time you can be pretty sure that it was extremely cold.
Posted by Ecobirder at 4:28 AM

An absolutely wonderful capture against the blue sky!

I hear you about how hard it can be to take pictures this time of year. Nice Bald Eagle shots. I hope you get some great winter shots. It's actually partly sunny here in western Washington today, so I am headed out to find some Golden Moments.

It's good to hear that the ban on DDT allowed the birds to increase in numbers. They are such majestic birds.

I cannot stop admiring your bird shots. Getting one in mid flight so sharp must be difficult. Very skillful photography.

A beautiful bird against a clear, blue sky! What more could we ask.

EB: Those are super captures of the eagles on wing and the stories are special.

This photo makes you want to soar. Great SWF photo!

Breathtaking picture of the eagle!

amazing capture. there is nothing better than a bird in flight caught wonderfully.

It is wonderful to see this beautiful eagle in full flight. what a sad time when the eagles nearly disappeared. Nothing satisfies as good as nature.

Fabulous photos, so sharp! Have a great and warm weekend! (-:

That is a superb photo shot of the eagle

Bird in flight is poetry in motion. Great photo.

Beautiful photo, how lucky to be able to get close enough for these photos.

Magnificent captures of such a majestic bird.

Awesome sight! I've never photograph an eagle before! Thanks for sharing! :)

I'm just a little jealous, I don't get to see birds like this around my place! Beautiful.

Wonderful capture! The sky is gorgeous and the eagle is simply magnificent.

You captured this majestic bird so beautifully in your last photo!
It is a pleasure for me to visit one who so appreciates Nature as do I!

what could be better than an eagle in the sky...

Those photographs highlight the beautiful range of tawny textures in the bald eagle! Gorgeous!

Amazing shot!! Thank you for sharing it with us!

What a magnificent photo...

Love this place. You have a wonderful gift my friend,

That second photo is perfect! What camera do you use? Happy SWF!!