Up here in Minnesota the realities of winter are starting to sink in. The light covering of snow that we got this past weekend looks like it is going to stay and unfortunately there is surely a lot more on the way. I stopped by Lake Vadnais yesterday to photograph migrating waterfowl and found that they had already closed the road for the winter. I decided to park and walk in but I found most of the water near the shore was already ice and the only open water was near the middle of the lake so the birds were to far away to get any decent pics. So since I kind of have a case of the beginning of winter blues I decided to post some summer dragon pics to cheer up myself and anyone else who is already sick of snow, cold, and grey skies. 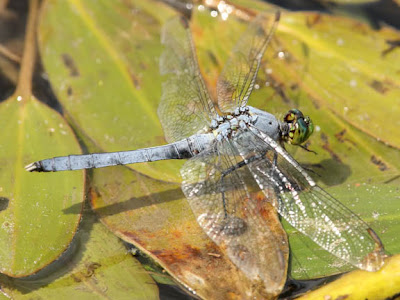 All of these pics where taken at Purgatory Creek Back on July 23rd. It is kind of fun to look at these pics and remember sweating out in the wetlands, back in July, when the high temps this week are in the 30s if we are lucky. 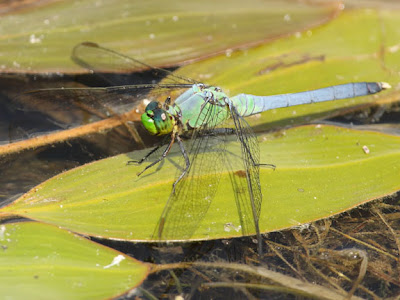 The first three pics are of eastern pondhawks. Eastern pondhawks begin life bright green in color. Females stay this green color but as the males mature pruinosity covers the abdomen and and thorax and gives it the powdery blue color. 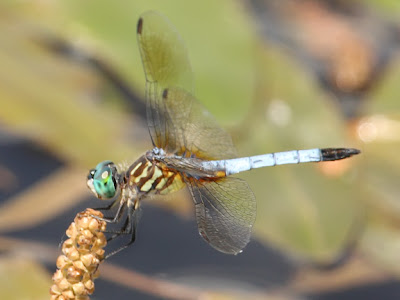 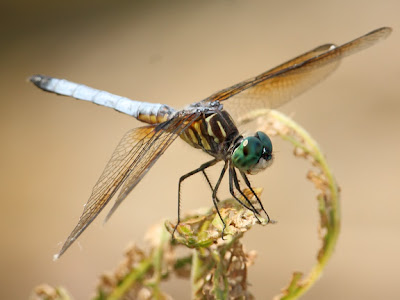 Blue dashers typically hunt from a favorite perch. Both males and females will defend their preferred feeding perches leaving the perch only to catch prey or fend of a rival. 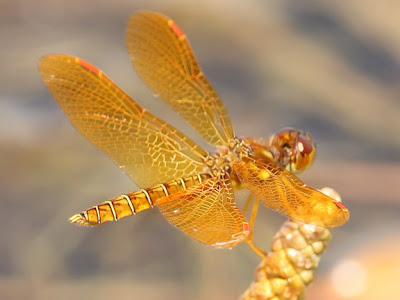 The eastern amberwing is one of the smallest dragonfly in our area. Since they are usually less then an inch long, the elfin skimmer is the smallest dragon in North America at .8 inches, they are often easier prey then other dragons. To help keep themselves from becoming prey they will often mimic wasps, which they resemble in size and color.
Posted by Ecobirder at 3:28 PM

This brings back summer with a smile :-) I just learned about dragonflies this past summer and spent a lot of time chasing them and taking photos. The Amberwing was one of the hardest to get even though we have plenty on our pond. Your photos are great!

I have thoroughly enjoyed my lesson on the dragonfly. Great post, so informative and xcellent photographs, thank you.

we see a lot of the blue dashers here in nw alabama (i never knew their name) but this is the first time i've seen an amber wing...it is beautiful! thanks for the lesson.

I too started getting into dragonflies this year. I have brush piles in my yard and they seem to be really attracted to them so it gave me a chance to study them close up.

Thanks for the lesson and bringing back fond summer memories. I too am missing summer and all of the creatures that go with it.

Your photo of the amber wing is monumental for something so small. A wonderful capture of such great beauty.

Your pictures are amazing!
as a huge nature lover, I just love your blog.

These are wonderful shots of the dragonflies. Amazing actually. For some reason the name Purgatory...was it creek? That stuck out with me and I wonder why they called it that.

Great photos! I still see dragonflies over my pool here in Phoenix!