Each year for the past several years we have made a trip out to Yellowstone National Park to photograph wildlife. Typically we either go in May or September, although we prefer May. 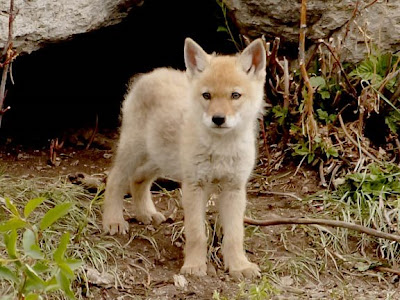 Our 2007 Yellowstone trip was perhaps the most disappointing to date. The weather was not very cooperative and we did not see as many of the more rare species that year. 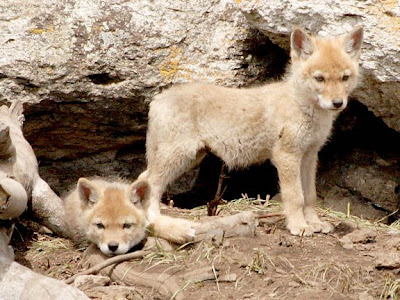 The highlight of the trip that year was the den of coyote puppies that we had the opportunity to photograph for a couple of days. 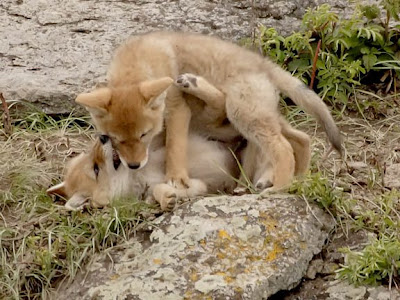 We had other opportunities to photograph coyote pups at the den in past trips but none of the other dens where as close or accessible as this den was. 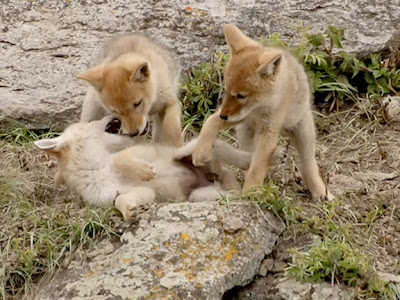 The den was located near to a boardwalk trail up near Black-tailed Dear Plateau. There were many photographers there sitting on the boardwalk taking pictures of the pups that were playing outside the den about 50 feet away. 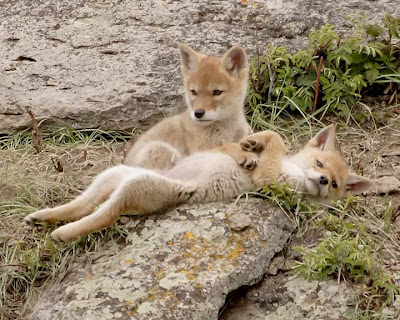 We photographed the pups over a couple of days but when we returned on a third day the den was empty. When we asked another photographer in the area about the den we found out that someone had tried to get close to the den which had worried the adults so they had packed up the kids and moved the den. Why do some people have to be so stupid and thoughtless.

Posted by Ecobirder at 9:01 AM

The pups are adorable.

These pups are so adorable. I particularly like the last picture where one pup is all stretched out on it's back, so cute!

As to your question, some people just have no sense or respect of nature,

People are so stupid and birders are guilty of it too...first do no harm should be the motto...

Wow.. those are very priceless shots!

My Camera Critters post is now up, too! You can check it here if you have some time. I'll be glad to see you there.

Oh my! I don't no where to begin. These are absolutely precious. So young and carefree. The last pic is priceless. I love the expression on the one sitting. And the la-la-laaa one. Beautiful. Thank you for sharing these.

Stupidity, unfortunately, is an inherant part of sixty percent of the population, also destroying thigs merely because they are there.
You did get some really charming pictures of the pups anyway, just a pity that the parents in all probability won't breed in that den again because of that one mindless idiot.

The pups are adorable...the photos of them spectacular! I should think getting to see and capture them more than made up for the disappointing weather, etc.

OMG, are they cute!! My cousin has done a couple of documentaries on coyotes here in PA and in Montana so I was quite interested in seeing this post. Very nice!

they may be wild, but they are still adorable!

Gorgeous! are you shooting film or digi?color is great!
Amanda

They are so cute. How exciting to see them. I love the last shot so sweet laying on his back.
Happy new year!

Absolutely Precious! I especially love the last photo! Sorry to hear of the intruders. You would think people who love wildlife enough to photograph it would have the sense to have proper manners!

These are magical images. I am so jealous.

Hey Ecobirder, super captures of the little coyotes. The final one definitely gets my vote for "coyote pup of the year!"

It also appears that most of us know the unfortunate answer to your question. I don't think I need to add my two cents. I could write an entire essay on the subject.

You get some really terrific shots of elusive and adorable critters! Loved this!

OH MY GOSH!!! These photos are spectacular! I LOVE LOVE LOVE that lost shot the most.

Hello, I posted one of your photos on my urban nature blog (Out Walking the Dog) with a link back to this post. Please let me know if you would prefer that I take it down, and I will do so right away. You can see the post here: NYC Coyote Watch 2011: Coyote in Queens

So sorry. I just posted an incorrect link in previous comment. I will try again: NYC Coyote Watch

Thanks for sharing this with all of us. Of course, what a great site and informative post. I will bookmark this site. Keep doing your great job and always gain my support. Thank you for sharing this beautiful article.