It appears as though we are going to get lucky in southern Minnesota again this year. The harlequin duck that wintered near Prescott, WI last year appears to have returned again this year and will hopefully stay for the winter. 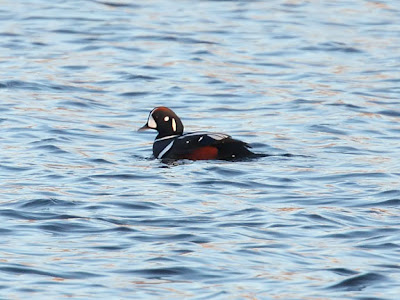 The reason why this is such a big deal is because there are few places in the United States where you can typically see a harlequin. Other then Alaska the only locations, in the US, that you may see one during the summer months are portions of Montana, Washington or northern Oregon. You can also find them along the Pacific Coast from Washington to northern California and along the Atlantic Coast from Maine to New Jersey during the winter but they are pretty rare here in the middle of the continent. 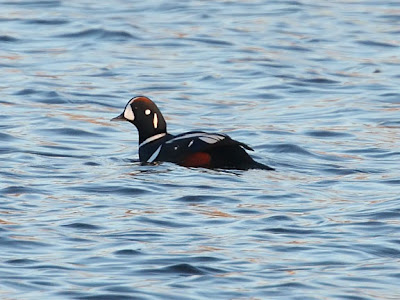 Harlequins are diving ducks. They mainly eat fish and marine invertebrates which they catch by diving under the water. The location that the duck has chosen to over winter is near the junction where the swift moving St Croix River joins into the larger Mississippi. This area does not typically totally freeze up during the winter which makes for good winter habitat for birds that require open water to survive. Other birds that are in the area besides the harlequin are common goldeneye, Canada geese, trumpeter swans, mallards, an occasional scaup or redhead duck, and bald eagles. 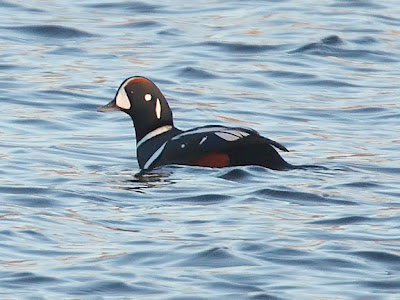 Last year I had several opportunities to photograph the harlequin but unfortunately I still have not got that perfect pic. Much of the Minnesota side of the river is not accessible where the duck typically is seen so most of the time I am shooting from the Wisconsin side. This often puts the duck a good distance away, like in the above shots, or even worse directly in front of the setting sun. Then there is the steam to deal with. During the winter the days that are not overcast are typically very cold. On these days the water temps are usually above the air temp and it creates a steam that flows off of the water making taking pics an extreme challenge. Hopefully this year I will get an opportunity the perfect harle pic.

Posted by Ecobirder at 2:06 PM

Great pics, Jeff!! Boy, I wish we would have stayed a little longer! Another trip is a certainty.
Cindy K.

That is a beautiful duck. Thanks for sharing. Helen

We are always trying for that better picture. Only other photographers understand that.

I think these are awesome shots. And it's such a beautiful duck too.

It as pretty as a wood duck...hope you get the photo you want..

great photo's and a Happy New Year to you,

Great photos of the Harlequin...Chicago gets a few over winter, but I cannot manage to drive up there when they are spotted. Nice shots of a rare duck! Somehow, you always get the hard ones!

Good luck! You are priveledged to even see one. It is still missing from my life list!