Back in August, 8-8, I travelled to South Dakota to participate in a shorebird workshop. During the workshop we identified over a dozen different type of shorebirds but that one that was probably the most common was the least sandpiper. 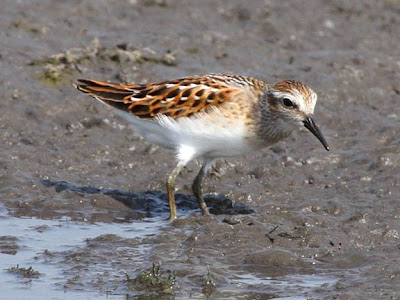 The least sandpiper is smallest of the shorebirds at only 5 to 6 inches, a wingspan of around 11 inches and weight typically around an ounce. 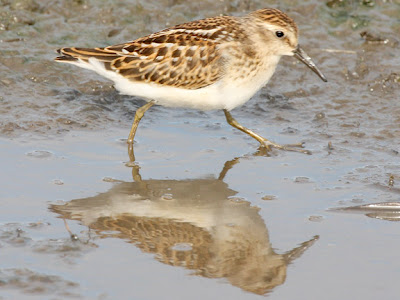 Least sandpipers often travel in small flocks of tens or hundreds of birds and are usually hang around with other shore birds. The flocks that we saw in South Dakota in August were relatively small, usually between 10 to 20 birds. 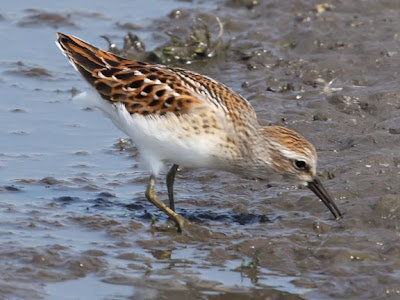 Least sandpipers are usually found foraging at the upper edge of mudflats, where they walk with their heads down looking for food on the surface instead of probing the mud like many other shorebirds. 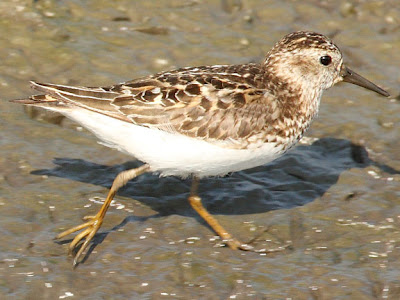 Least sandpipers breed from the boreal forests to the sub-Arctic tundra in Alaska and northern Canada. Males arrive on the breeding grounds before the females and establish a territory. When the females arrive the birds pair off and begin the breeding process. Nest are constructed by both male and female and consist of a scrape, lined with grasses or moss, in the ground near to water. Both parents take turn incubating the eggs which will hatch in about 20 days. The chicks leave the nest and are able to feed themselves within a day after hatching but the parents will continue to care for them until they fledge in about 3 weeks. 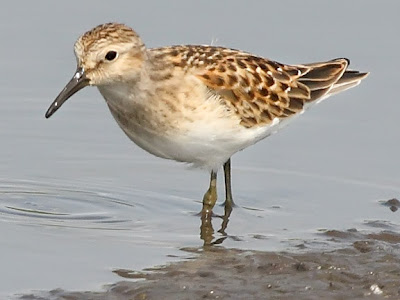 During the winter the least sandpipers migrate south to wintering grounds in the southern US, Mexico, Central America and down into northern South America. Many of them winter in mud flats, tidal creeks and salt marshes in the warm coastal regions. Others will travel inland and spend the winter inhabiting shallow ponds, lakeshores and sewage treatment ponds. 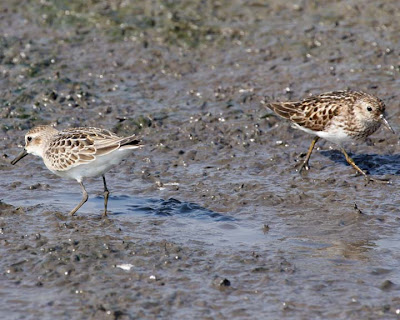 Since least sandpipers are often found with other types of small sandpipers it is sometimes difficult to identify them. During our shorebird workshop we frequently found least sandpiper mixed in with semipalmated and pectoral sandpipers. In the picture above there is a least and semipalmated sandpiper. The least sandpiper, which is on the right, has yellow legs and a pointy, slightly tapered bill. The semipalmated has black legs, although this one appeared to have lighter legs then normal, and a shorter blunt tipped bill. A pectoral sandpiper has yellow legs but are typically larger, then the least, and have a distinct division between their brown chest and their white belly, where it is more subtle on the least.
Posted by Ecobirder at 2:30 PM

I was on a similar workshop two years ago and know how difficult it is to get good shots such as yours; congratulations!

Great Photos of the Least Sandpiper. Shorebirds are a lot of fun to follow with a camera in hand.

Those are truly beautiful photos!

You inspire me; I have got to learn more about shore birds. Thank you for introducing me to this lovely little bird! What a lovely post...

They're such cute little guys!