My plan today was to post some very cute coyote cub pics that I took back in 2007 for this weeks camera critters but fortunately the weather finally cooperated, I think that this is the calm before the storm since tomorrow we are under a winter storm warning and Monday the high temp is only supposed to be about 9 degrees, and so I went out and did some shooting. 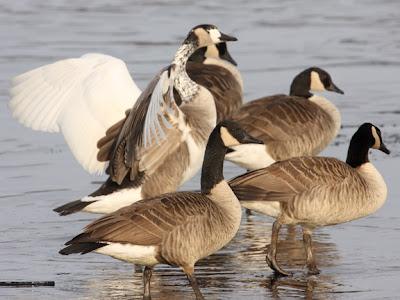 My first stop was Point Douglas, which is on the St Croix River near Prescott, WI. Last year we had a harlequin duck that wintered in this area so it is always a good place to check for unusual and rare sightings. This time I did not see any harlequins but mixed in the geese, swans, goldeneyes, mallards and other miscellaneous waterfowl I found this very unusual goose. 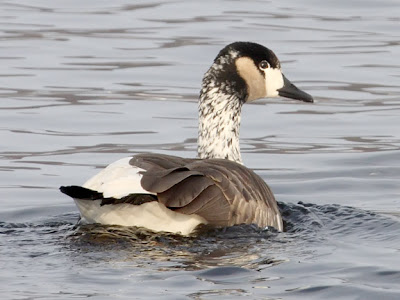 At first I was not quite sure whether this was a leucistic or partial albino bird or whether or not it was a Canadian goose and barnacle or snow goose hybrid. It turns out that other Minnesota birders have already seen and photographed this bird and have identified it as a leucistic Canadian goose. 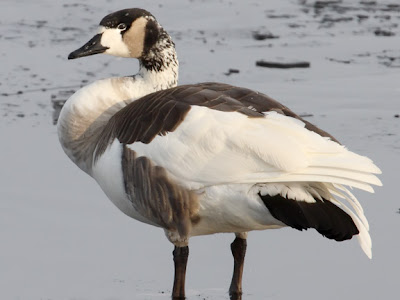 In researching leucism I found that there is a lot of differing opinion concerning leucism vs partial albino. The most common belief is that albinoism is caused by a lack of melanin. Melanin are the compounds in plants and animals that serve as pigments. With out any melanin a bird would lack any pigment, including those in the eyes. This would make the eyes appear pink, because the only color would come from the blood vessels in the eyes. It is believed that luecistic birds do have melanin in the body but the melanin does not enter some of the feathers. 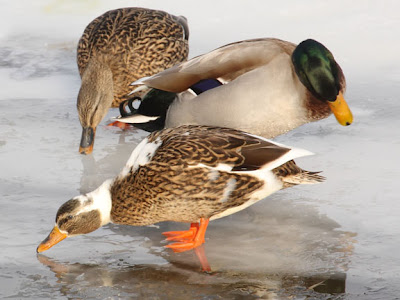 Besides the goose up at Point Douglas I also found this leucistic female mallard down on Lake Peppin near Lake City, MN. She was not nearly as drastically colored as the goose was but you can see by the other mallard female in the picture that she has distinct white patches that are not normal for a mallard.

Posted by Ecobirder at 8:10 PM

That goose is really beautiful!

The leucistic goose and mallard are very unique and beautiful! I hope this condition isn't associated w/ any health problems.

Your photos are excellent. If you don't mind, I'd like to link your blog to mine.

These are incredible shots and I defintitely haven't seen one like that before.

Is the leucistic condition permenant or do they change if they get more melanin in their diet?

I have not heard nor seen these. I would guess the color would not be good for hiding from predators especially for the mallard hen

What a very informative post! I learned so much from this that I didn't already know! Thank you so much.

Richard, their diet will not affect the condition as it is a phenotypical event related to pigment cell migration during formation of the neural tube. I don't think there is much of a predator threat anymore since major carnivores have been driven to extinction by humans. A hawk perhaps would target a songbird with pied patches. OTOH pied patches may help an animal hide in snow cover.

That goose would look great in my trophy room.

Almost every hybrid canada goose I have seen (that mated with greylag stock) has the white band across the chest. That just makes me think its a hybrid.

Birders seem to have a really hard time figuring out domestic breeds and domestic hybrids. They arent used to seeing them and there is no good guide books for these waterfowl.