The calendar that I put together each year is like a compilation of the best pictures that Michelle and I took during that year. The only rule is that the picture had to be taken in the year prior to when the calendar was created, although Michelle also has an unofficial rule prohibiting me from including a lot of bugs. Since we usually spend our vacation each year out shooting pics it stands to reason that quite a few pics in the calendar come from vacation shots. In 2009 we traveled to Yellowstone in the spring and 5 of the 14 calendar pics were taken during the trip. 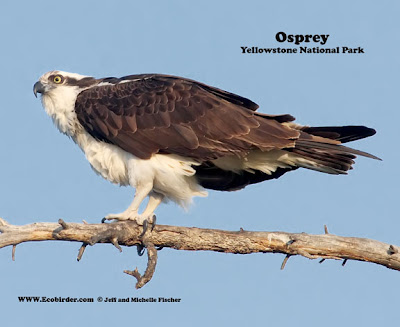 The osprey is fascinating bird. These diurnal raptors were at one time called a fishing hawk however they are not a member of the hawk family. The osprey is in a family by itself mostly because of their unique feet. Osprey have 4 toes which are all an equal length, the toes of other raptors differ in length. They are also the only raptor, other then owls whose outside toe is reversible, allowing it to face forward or back. We photographed this osprey near its nest outside of West Yellowstone. 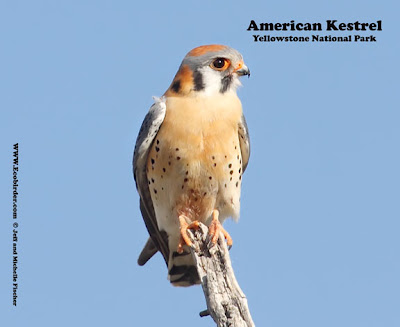 For the past two calendars, 2009 and 2010, we have featured a picture of an American kestrel. It is possible that it is the same kestrel as we have photographed it in nearly the same location in the Lamar Valley each year. These kestrel pics are some of the best kestrel pics that we have taken mostly due to the natural surrounding in the background, most of the other kestrel pics that I have taken are when they are on electrical lines. 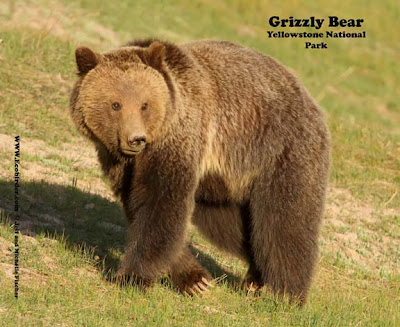 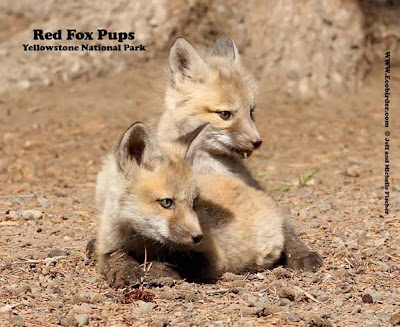 The other real cool thing about Yellowstone in the spring is the opportunity, if you are patient and lucky, to get a view of all of the new life. We have photographed red fox in Yellowstone several times over the years but we had always hoped to spot a den so that we could get pictures of the pups. This year, thanks to a tip from another photographer, we got our wish. We took a half a day to travel out to the east entrance where a mother fox had set up her den under the stairs of an old building. Because of their proximity to humans they did not seem to mind people much, even pesky photographers, which was good for us but probably not so good for them. 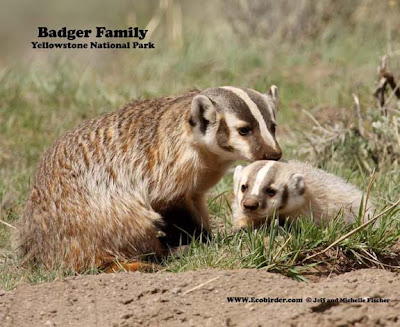 The other new baby pics in the 2010 calendar were of a badger with kits. We waited a total of about six hours to get the shots, Michelle was smart and stayed in the car reading while I sat out in the middle of a field in the Lamar Valley with a bunch of other photographers, but it was certainly worth the wait. She had four kits that she finally brought out of the den for us all to see. Unfortunately I never was able to get a good shot of all four kits facing the camera so I decided on this one with mom and one of the kids.

What a fabulous calendar!! And, of course, yours and Michelle's photos are fantastic as always. Love the family and baby ones!! I always appreciate all the interesting information you include as well! Hope you have a great week!

I am in awe! These are great. Love those foxes!

Wow! Those photos are beautiful as are the subjects. What a great calendar they would make.

Fabulous shots! What an amazing sight to see and photograph all these creatures.

They are great shots.
Sydney - City and Suburbs

Wow, I can't decide which one I like best. They are all amazing and you are so lucky to have seen all those animals in the wild.

Lucky the folks that get your calendar! Great photos.

I want to visit Yellowstone so badly! I can't even begin to tell you how much I'd like to go there.

Beautiful! My favorite is the badgers.