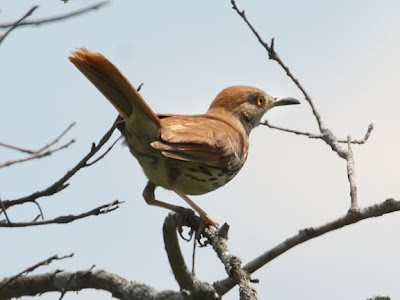 Here in the U.S. we have always been a country that is in to symbolism. The proud bald eagle was chosen as the bird that would represent our country but each state has also chosen a bird to represent it as the Official State Bird. The most commonly chosen state bird is the northern cardinal, seven sate have the cardinal as their state bird, followed closely by the western meadowlark, which has six states, and the northern mockingbird, which represents five states. The southern state of Georgia is represented by the brown thrasher. 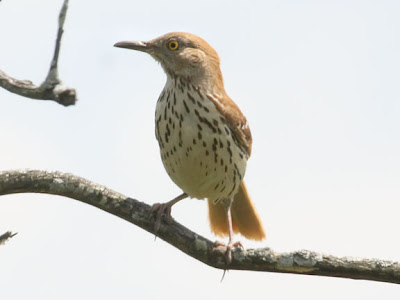 The brown thrasher can be found through out most of the Eastern half of the United States and south east portions of Canada during the breeding season. They migrate to the south eastern US during the winter where they mix with a population that stays in the southern states all year round. They are typically found in habitats with a lot of scrub and brush and place their nest in shrubs or on the ground. They are a ground forager and can often be heard rustling through the leaves or the bushes before they can be seen. They are an omnivore so they are typically foraging for seeds, nuts, berries, insects or worms to eat.

We had one nesting in the bushes at my childhood home in St. Paul. Shy but proud I would say. Nice captures Eco.

Great photos!
I think it is very difficult to take good photos of birds, because they don't still...
You did a good capture here.

Great bird watching. Love the close ups. Found a bird nest at my home garden. They nearly fell off the tree and we had to help place them back to where they belong. It was so lovely watching the baby birds hatch and grow. :-)

Nice photos of the Thrasher.

Very nice shots. We see these around and enjoy the info about it.

Great photos. It would be interesting to know how each state came up with their choice of bird.

Thanks for the info, nice capture! Joan

What a delightful looking bird!

Lovely brown thrasher. I haven't seen one (yet), but that doesn't mean they don't fly through our area at some time. Beautiful photos.

love your photos of the thrasher and the information. I am trying to learn more about the birds around here, especially their songs.