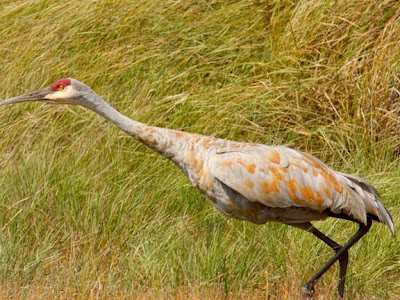 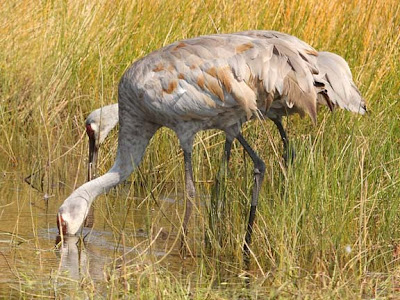 The other three subspecies are non-migratory and have a much smaller population. There is the Mississippi sandhill, which lives around the northern gulf coast, the Florida sandhill and the Cuban sandhill, which can be found in Florida and Cuba respectively. These three subspecies are considered threatened or endangered mostly due to habitat loss and range in population from around 5000 to 50. 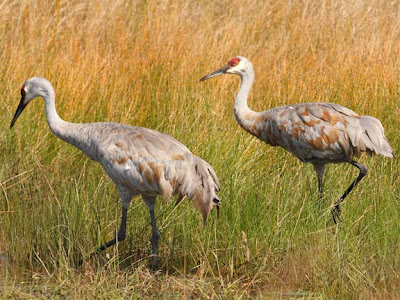 Even though their populations are currently stable, or in some cases growing, the greater and lesser sandhill cranes still face issues when it comes to habitat loss. Because their numbers are distributed during breeding season they are not very affected by habitat loss during that time of year. During the winter and migration are another story though. 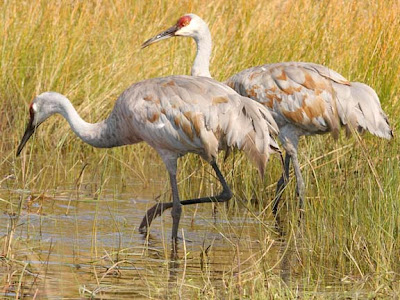 During the winter greater and lesser sandhills migrate south and congregate in wetlands located in warmer climates. Habitat loss in these areas could have a major effect on the sandhill population. Even more potetially dangerous is the loss of migration habitat. during the fall sandhills gather together in staging areas, like Crex Meadows where these pictures were taken. Hundreds or perhaps thousands of cranes stop in these areas to eat so that they have enough energy for the long flight south. As these areas shrink so will the population of sandhills. Perhaps the most critical habitat for sandhill cranes lies on a seventy mile stretch of land in the center of Nebraska. The Platte River with its shallow center is perfect roosting territory for cranes migrating north in the spring. During the day they feed on grains left over in the neighboring farm fields and then they return to the protection of the river at night, forcing any predators to cross the water before getting to the cranes. Eighty percent of the sandhill population, or over 450,000 cranes, stop at the Platte River each spring. If this habitat were ever lost it might mean the end of this wonderful species of bird that has been on this earth for over two million years.

Posted by Ecobirder at 7:58 PM

Absolutely stunning photos!!! I used to see a lot of them in Nebraska when I was a kid.

Here's My C C entry - hope you can come by for a visit if you find time.

Interesting colouring on these cranes. I suppose the rust colour on the feathers helps them blend in at times.

What an adorable photo, love the yellow dots on the feathers. It loooks great.

oh! wow these are good looking birds. love them and it's my first time to see these kind of birds.

Beautiful photos and wonderful information. I have never seen a sandhill crane, they come through here but I have not been lucky enough to see them.

They are beautiful birds.

Amazing images and beautiful details. I have never seen a sandhill motorised hoist, they come through here but I have not been fortunate enough to see them