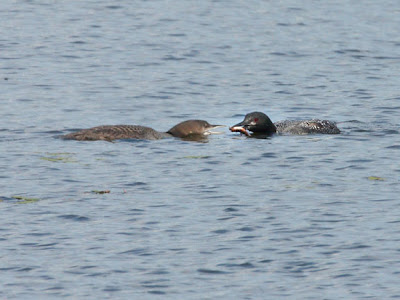 Last summer I was lucky enough to come across an immature common loon while birding out at Crex Meadows. At first there was an adult loon around which was bringing fish to the youngster, who probably was not a proficient hunter yet. 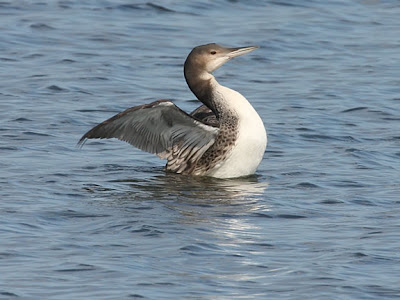 Later on the young loon was left alone. It stayed near the middle of the lake which would should provide it with adequate protection from most predators, such as raccoons, fox, coyote, and skunks. Although it still had to be cautious of possible predation from bald eagles. Fortunately the loon is an excellent swimmer and can dive under water well below the reach of an attacking eagle. 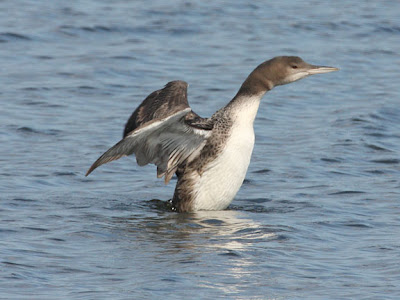 The nest of the common loon is usually a mound of grass and sticks located close to water on the shore of a lake or island or sometimes on an old muskrat mound. It is usually hidden the reeds or other vegetation and is used year after year. The female lays a clutch of 2 to 5 eggs which both male and female incubate for 27 to 30 days. 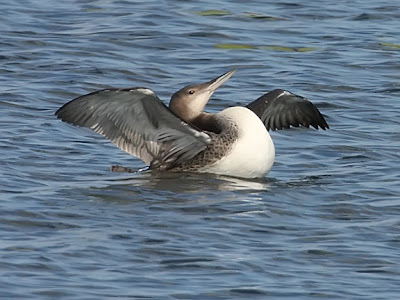 With in a day or two of hatching the loon chicks leave the nest. At two to three days they have the ability to swim and dive under the water. At this point they will spend their whole life in the water until they are old enough to mate on their own. If they need to rest they will hitch a ride on the back of mom or dad. 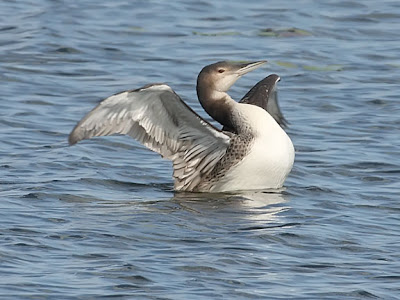 It takes about eleven weeks for the young loons to learn to fly. Because they are built more for swimming and diving, with their legs placed far back on their bodies, their take off and landings appear awkward. Because of their weight, loons can weigh up to about 12 pounds which is approximately the size of a large fem

ale bald eagle in Minnesota, it takes a long run way for them to take off. This loon was practicing his take off that afternoon, skidding across the surface of the water but he never quite made it up into the air. He probably still needed a little more practice.

Wow, I love 2 loons very romantic scene and the stretch of one loon very goregeous captured. Well done. Thanks for sharing

My WATERY WEDNESDAY...do stop by if you get a chance.