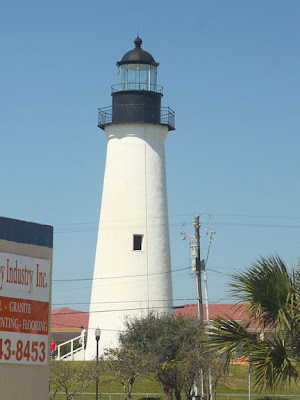 Each of the days that we stayed out on South Padre Island we traveled through the small town of Port Isabel to get there. Port Isabel was settled back in 1554 making it one of the earliest settlements, that has been continuously inhabited, in North America. The center piece of Port Isabel is the lighthouse, which was built in 1852 to help ships navigate the low lying Texas shoreline. With the emergence of railroads the amount of ship traffic diminished and in 1905 the lighthouse was decommissioned. In 1947 the state of Texas purchased the lighthouse and surrounding land, about 1 acre, and in 1952 it was dedicated as a state park. In 2000 the lighthouse was restored and it now appears as it did back in 1880. 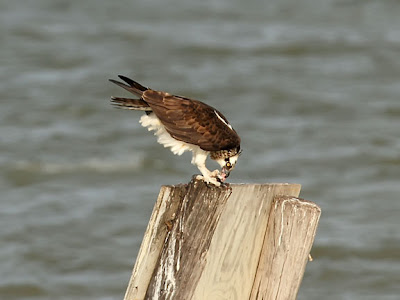 As a nature enthusiast the thing that interested me most about Port Isabel was all of the wild life that was hanging around the port. Each day we would see several different types of birds perched on the piers right off shore. Like this osprey that was enjoying his morning sushi. 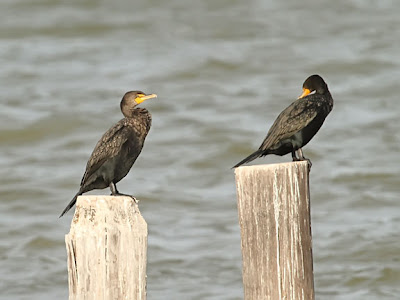 There were also cormorants as well as several different types of gulls. I think that these were neotropic cormorants which have a smaller head and longer tail then the double-crested cormorants that I typically see around home during the summer. 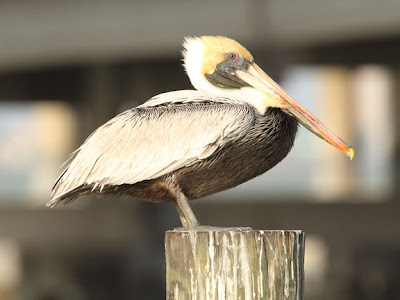 The most exciting birds that we saw in Port Isabel were the endangered brown pelicans. Here in Minnesota we can white pelicans, especially the north and west parts of the state, but brown pelicans are extremely rare visitors to the state. In the background of this picture you can see the beginning of the Queen Isabella Causeway. The bridge was built in 1974 and is the longest bridge in Texas, at about two miles. It is currently the only bridge connecting South Padre to the the main land, though they are looking at building a second bridge. In 2001 a tug boat pushing several barges ran into one of the bridges support columns which took down a 240 foot section of the bridge and killed 8 people. Needless to say I kept one eye on the water while we were crossing the bridge after all we have enough problems with falling bridges here in Minnesota.

Marvelous post and photos as always! Love the lighthouse and the birds are beautiful! You obviously had a wonderful visit to South Padre!! Thanks for sharing! Hope you have a great week!

Great shot of the pelican -I got one as a life bird this past winter in Florida - but didn't realize that they're on the endangered list!
Now with the 1000 barrels of oil leaking into the Gulf thanks to the most recent oil rig accident, there'll likely be even more at risk. So sad.

Looks like a great place to visit. Hope they build that second bridge probably could really be used. Much better than one to nowhere LOL

The brown pelican is one handsome dude!

It's wonderful that you had so much fun there. I went once and just loved it. I didn't want to go home!! ~karen

really great shots! love them! i find it difficult to photograph birds but you do it very well.

Great post again. I have never heard of brown pelicans. They are beautiful.

I love brown pelicans! Great photos! Looks like a fun place to visit! I don't blame you for being careful on that bridge!

Great photos, I love Pelicans and Lighthouses. Thanks for sharing:)