Since things were a bit slow at Medicine Lake NWR because of the low water levels we decided that we did not really want to spend Saturday morning at the refuge again. We had half a day to spend bird watching and the other we had to drive across Montana to Livingston where our Saturday night hotel reservations were made. At the ranger station at Medicine Lake we found some info about some of the other parks and wildlife refuges that were around. After a little bit of research we decided to make a stop over at Bowdoin NWR. So Saturday morning we set out early across Montana. We saw quite a few birds along the way but since we did not have a lot of time for Bowdoin we just observed and did not stop to shot. We did make one exception when we came across a nice looking Swainson's hawk surveying the fields from on top of a telephone pole. 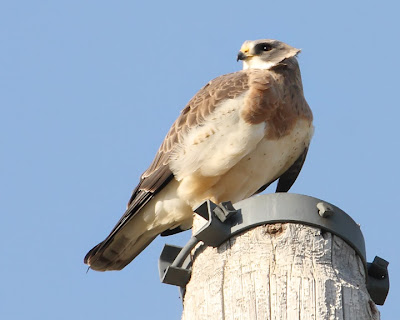 Swainsons' hawks can occasionally be seen in southwestern Minnesota but their numbers are declining through out their range. Their decline is due mainly to habitat destruction, although loss of prey species and pesticide poisoning also have played a factor. 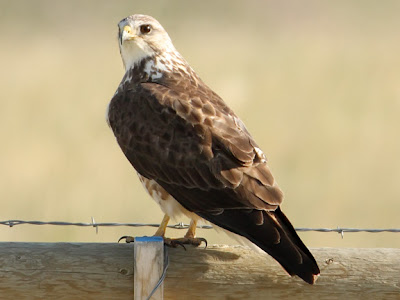 After we watched him for a while he moved down to sit on a gate near the road. Swainson's hawk are unusual in that their diet consists mainly of insects. Because of this, they are very migratory, spending their winters in Florida, California, Mexico and South America. Both their breeding grounds in the western US and their wintering grounds are declining as small family farms give way to urban sprawl and large open factory farms, which have very little trees for nesting. Their decline has caused the Audubon society to put them on their watch list as a species of national conservation concern.
Posted by Ecobirder at 4:32 PM