Since our eagle release, on February 28th, I have made a couple of trips back down to Red Wing, MN to see if I could find, and photo, the bird that we released. 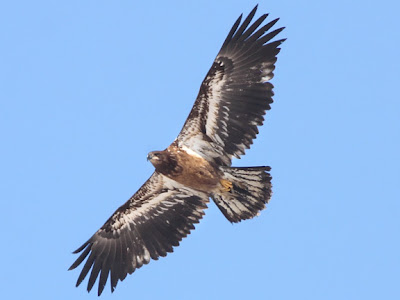 Now you may be wondering how in the world would I ever be able to distinguish which eagle was the one that I released? First of all it was an immature bird and it also had a small cut above the eye. I did see a few immature birds but none appeared to be the bird that I released. 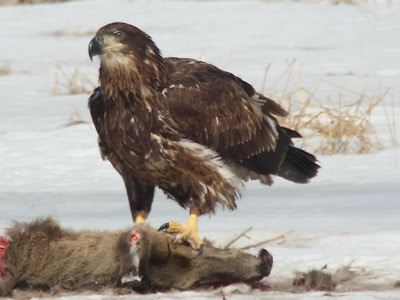 The DNR had put out some dear carcasses which really helped to get some good shots. 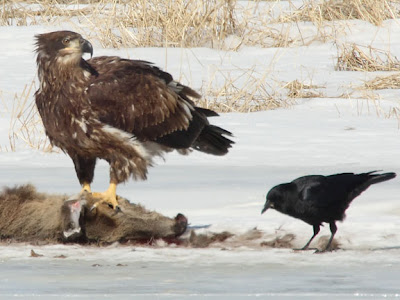 While crows often mob other raptors they usually seem to get along with eagles. I think that is because eagles do not usually kill crows, a lot of work for very little pay off, and the crows can sometimes get a free meal by scavenging bits off of an eagle kill. 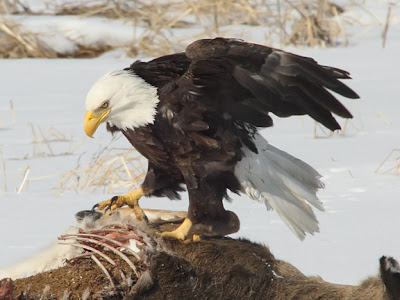 Not all of the birds enjoying the free meal were immature birds. Adults have no problem scavenging. 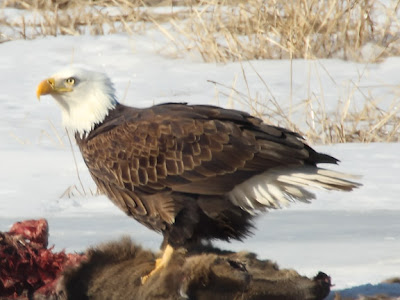 A friend at work asked why the DNR would put out dear carcasses. He was wondering if they did so to save the eagles from starvation. I knew that this was not the case. With all of the open water near Colville Park, due to the Excel Energy Plant, there is usually plenty of fish to sustain a pretty large population of wintering eagles. My guess is that these deer were killed due to collisions with cars and leaving them near the road might attract eagles and other scavengers who would then be at risk of being hit. So the DNR moved them to a spot where the eagles could feed on them safely. 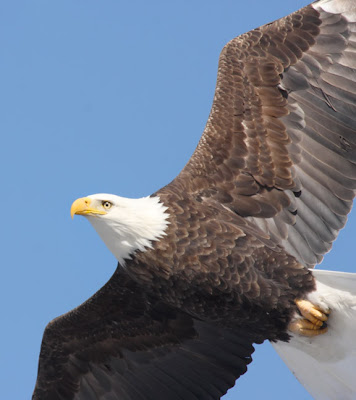 As I was standing watching the eagles feed on the deer carcasses an adult came out of no where and flew over head. I was had holding the camera at the time so I was able to get a quick focus on the bird but it was so close that I could not fully get the bird in the frame. Sometimes you get some of the best shots when you don't really have the time to compose the shot. 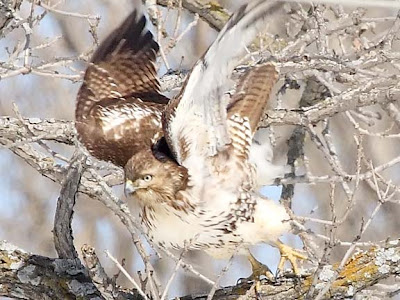 On Monday the 3rd I decided to go a bit further down 61 and I found this red-tailed hawk that was being harassed by crows down in Frontenac State Park.
Posted by Ecobirder at 7:41 PM

Great shots! They are very interesting in that they show the birds doing something -- not always easy to accomplish.
Ivars

Enjoyed your photos - Bald E in flight is cracking.

Wow, great pictures Ecobirder, but the surprise low fly-by is my favorite!

I am so jealous....great pictures of eagles....I wish I was there with a deer carcass...oh well. I really like the flying shot you got at the end there. I wish you had seen the eagle you had released, keep us informed if you find him again.

Thanks Ivars, owlman, gallicissa, ruthie and Ocean for your nice comments. If you like great eagle shots check out weekend shooters blog he has some really great shots. You can find the link on my sidebar.