New Edition to the Family

Last weekend Michelle and I decided to check out an adoption day event that was being held at a local Petco by a rescue organisation called Last Hope. It had only been a few days since we had to say goodbye to our first child puddy, but neither of us could stand living in our house with out the pitter patter of little paws. Michelle really wanted a kitten so we arrived early, since we figured any kittens that they had for adoption would probably go quickly, but when we got there all that we saw were adult cats. There were still some cages empty so we decided to ask someone from Last Hope if they knew if there were going to be any kittens at the event. Last Hope was holding another event at a Petsmart not far away that was starting 30 minutes later, so we were planning to run there if they were not going to have any kittens at the Petco. As Michelle walked over to a volunteer a woman walked in with a carrying case holding 3 kittens. I called Michelle back and when a woman and her son asked if they could hold 2 of the kittens Michelle asked if we could hold the remaining one. That was all it took. 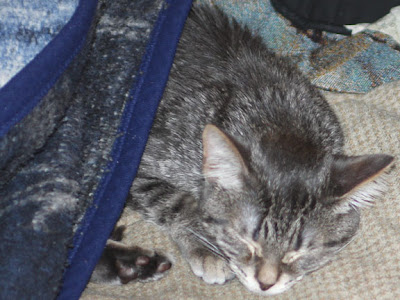 We never put her back down. Michelle filled out the paperwork while I held our new precious baby. Then we purchased all new supplies for her, since we decided that it was best to through out all of Puddy's old stuff and start fresh. 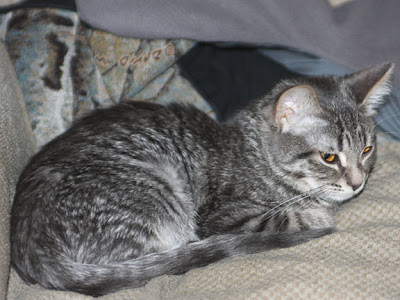 She really did not like the ride home, she cried most of the way, and when we got home she ran and hid under our couch, after we got her out we blocked the couch with an old curtain rod box that we had. It did not take long for us to beginning to bond with her and by the next day she was no longer hiding from us. 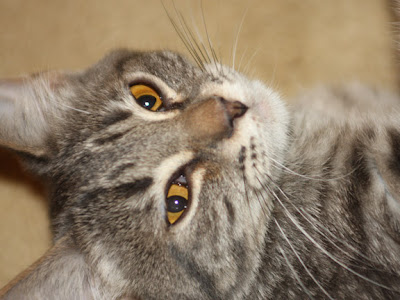 She and her siblings had been found alone outside and had been rescued and placed into foster care with Last Hope. Her foster mother named her Hidey because she was cautious and hid with her at first too. We were not that crazy about the name though and so after going through several good choices we decided to call her Misty. Misty is a gorgeous gray tabby with beautiful eyes which are almost orange in the light. She is 17 weeks old and according to our vet, who we visited yesterday, looks to be in good health. We will have to go back to the vet in a couple of weeks for her distemper booster and rabies shot and then next month for spaying and to have her front claws removed. She will have to stay over night for the spaying and will probably not be happy but it is part of the adoption agreement to have her spayed before 7 months old.

I actually would like to have 2 cats but I still need to convince Michelle that it is a good idea. Right now we are both just very happy to have Misty in our life. She is very cute and I am sure that you will see a lot more of her in the future.
Posted by Ecobirder at 9:05 PM

Congrats on extending the Fisher family!! If you want to go owling this spring let me know we can cruise Stony River Road for Boreal Owls and maybe catch some northern lights or a Great Gray Owl calling. March 29th? or April 5th?

I'm glad Misty found her way to your kind home. I am fond of tabby cats. We have a dog and a rabbit but when my sister became ill in January we brought her black kitty home. We had been trying to figure out a name for her and after reading your post about your black cat's passing, we named her Puddy.

2 cats is the best way to go, I think. We got two brothers, they get along great, and have someone to play with when we're not around to entertain them.

Another thing about cats: I've found they are at their happiest when they know their photographer human has a 500mm lens. It really brings them joy. Might want to pass that observation onto your wife. I mean, she wants her kitties to be happy, doesn't she?

Thanks Mike. I would love to go up and do some owling unfortunately gas has gotten very expensive and I am trying to save up for a 500mm 4.0 lens which will cost me about $7000 with the accessories that I need. Hopefully you will find someone to go with and find a boreal. I will be checking your site waiting for the pictures.

Thanks Lynne, Michelle and I are very honored that you named the cat after Puddy. I am sure that he will have a great home.

John, we will probably wait until after annual trip to Yellowstone before we look at another cat, but hopefully then we will decide on another. For now Misty has been doing a good job of keeping us busy. I gave Michelle your message about the lens bt it will still take me a bit to save up the cash. Hopefully the economy won't completely crash and ruin my plans.

What a pretty little girl!
Congratulations!