Prescott Waterfowl and others

This last weekend I also paid another visit to Prescott, WI to see if I could get some more pics of the harlequin duck. On Friday, the day before I went it had been spotted close to shore so I was hoping that I would get some good pics in nice light but alas nature is unpredictable. The harlequin did not show up for the hour and a half I spent looking. I did find some wildlife to photograph though. From the Wisconsin side of the river I got some pics of one of the harlequin peregrine falcons which was perched up on one of the tresses of the railroad bridge. I posted those pictures on an earlier post.

On the Minnesota side of the river I found a few waterfowl at Douglas Point. Common goldeneye have been pretty common throughout most of the winter but this turned out to be a pretty nice shot with this goldeneye catching some breakfast. 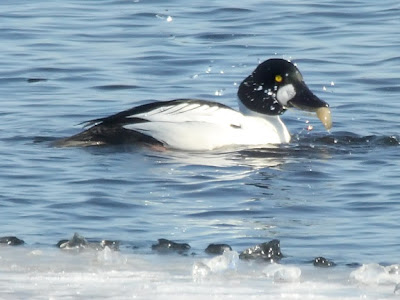 I also spotted some new arrivals. This group of scaup, consisting of 3 males and 2 females, were searching the shallow waters of Douglas Point for a meal. 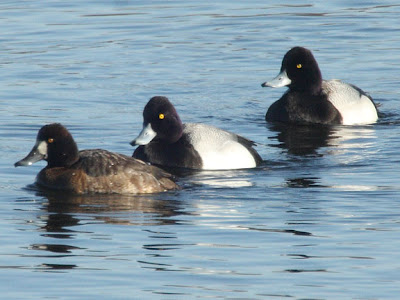 I am not sure if these are greater or lesser scaup. It is just really hard for me to tell by the shape of the head. Fortunately there are many great birders, who are much better at identification then I am, who occasionally drop by the blog. Hopefully one one of them will be so kind as to post in the comments below and let me know which type these are. 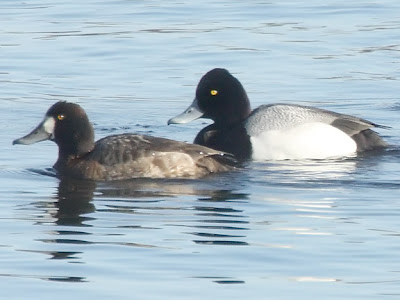 On the way out I found a red-tailed hawk perched on the hill that leads up by Carpenter Nature Center. A couple of people mentioned on my last post about how difficult it is to get a red-tail to sit still for a photo. The best way that I have found is to use your car as a blind. This is very easy around where I live because red-tails are very common and most of them hang out close to the road. It is best to pull over across the street from where the hawk is perched. If it is on the side of the road that I am on I will usually try and turn around and come at it from the opposite side.

There are two reasons for this, the first is because if you get too close you are likely to spook the hawk, even from inside a car. The other reason why it is best to be on the opposite side of the street is so that you can shoot out the drivers side window instead of shooting through the passenger window from across the car. I have twisted myself into some very interesting positions to try and get a shot that is on the opposite side of the car.
Posted by Ecobirder at 8:06 PM

I thank you for that advice on the hawk...I think from now on I will use the car to shoot pictures from...many of the birds seem to ignore the car and flee when I get out of it....I am more scary than a big old car it seems! You do have such nice pictures...I like the female cardinal above there also and the ducks...and so on.... ;-) cheers.