Even though it still feels a lot like winter here in Minnesota, we are still getting snow and the high temps have barely hit the low 40s so far, I have started to see a few signs of spring. On March 15th, while I was checking out the Mississippi River south of the Twin Cities, I saw quite a bit of courting behavior between the eagles down by Reeds Landing where there is open water. 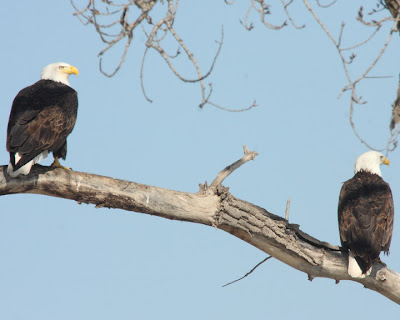 From their behavior this appeared to be a mating pair. This was very obvious when a train came by and they flushed from the tree together and then both returned together. Can you tell which is the female and which is the male. 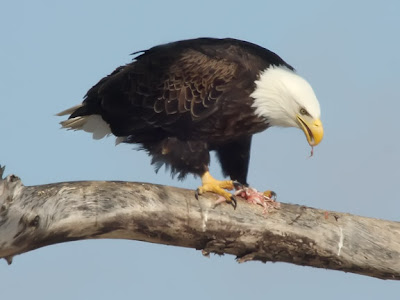 If you guessed that the one on the left was the female then you were correct. In the raptor world the females are typically bigger then the males, this is called reverse sexual dimorphism. Earlier she had been feeding. She will need to bulk up before the nesting season. 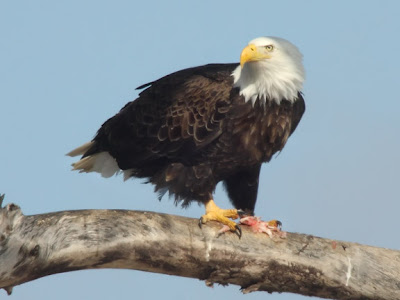 It was interesting because last Wednesday when I was at The Raptor Center doing my volunteer shift they brought Maxime back from a program. Maxime is a female bald eagle and one of the largest birds that we have for education. They took her out of her crate and then one of the staff members took her on the glove to give her the rest of her food. Othello, a male bald eagle, was tethered in the same room so that he could have a chance to take a bath. During the winter, when the water outside is frozen, we bring the birds in for a day or two to give them the opportunity to have a bath if they choose. While we often tell people about how the female raptors are larger it was kind of startling to see the difference with the two birds so close together. Max weighs in at about 11 pounds and Othello is only about 7. 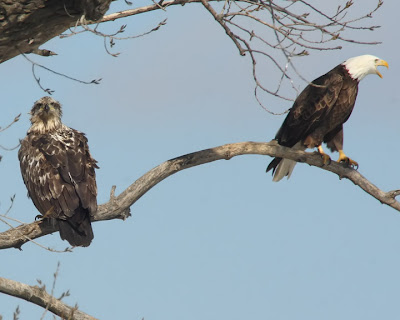 Back at the river the male was being very protective of his mate. He frequently let other males across the river know that the two were a couple and when one male approached the tree where the couple was perched he took off to run the interloper off. The immature above was no threat so it was allowed to share a branch. 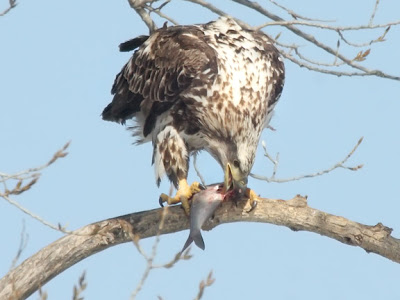 Later on the immature found himself a fish to eat. 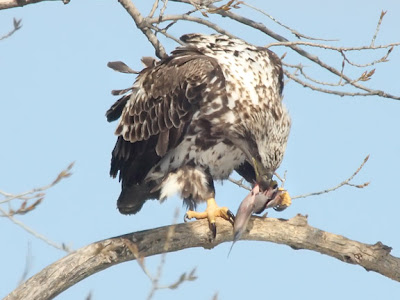 In the bald eagle world you have to be wary with your food and eat quickly. Since bald eagles are opportunistic eaters they will often try and steal a meal from another bird. 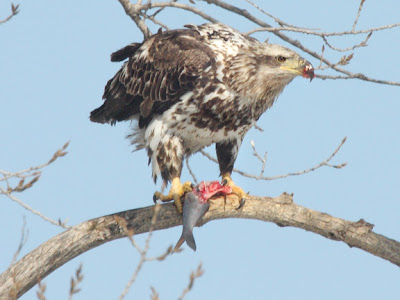 This young eagle had been around long enough to know the deal and so she gulped her meal down quickly. With all the white feathers that she has, it appeared by its size to be a female, I would guess that she was in her 5th-7th year. That would make her comparable to a human teenager eek. Eagles have all brown feathers when they are young and they do not begin to get their white head and tale until they are around 5 years old.
Posted by Ecobirder at 4:14 AM

I saw two eagles today next to the Spring Valley Trout Farm. One in the nest, head popping up repeatedly and the other in another tree nearby. I wonder how long before egg laying?

Great eagle shots; you've convinced me I have to get down the river SOON! Thanks.

Yes, Yes, Yes, ....yup I sure do like this post...and I will read it twice...such good eagle info in it...and all true!!! Either wild birds are landing on your camera or you spend a lot of time to get such perfect shots...I really like this post ecobirder...you know I love eagles. It is true the female eagle is always bigger and I heard a whisper that they are the first egg to hatch usually??? Do you know ecobirder if this is true.