On March 7th I decided to go check out the great horned owls nest in Lakeville. My last trip to the nest was on Valentines day so it had been a while and I was looking forward to going back out. I left work at my normal time and arrived at the lot where the nest is at around 3:00pm. I changed into my boots and hiked out into the field. On my way to the nest I heard a songbird singing. Unfortunately I do not know my bird calls very well, yet, so I was not sure what type of bird that it was but I could tell that the bird was nearby. I looked around and located the bird on the top of a small tree a few feet away. I was surprised to find that it was a northern shrike. I have seen plenty of shrikes this year, there have been a lot more then usual in the area this winter, but this was the first time that I had heard one sing. The song was very deceptive. I was surprised that a bird that is know for impaling small mammals and birds on twigs or barbwire while it eats them would have such a sweet melodic song. 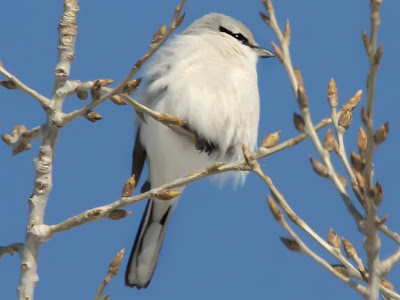 The shrike was not far away from the owls nest. Luckily for him the owls were not paying him any mind. Northern shrikes may be accomplished hunters but they are definitely no much for the top avian predator of the area. Both owls where on the nest when I arrived but as I passed the shrike to get in range of photographing the nest the male took off and headed into the woods. It is my guess that the male was attempting to lure a large predator, at least he probably viewed me as a large predator, away from the nest. 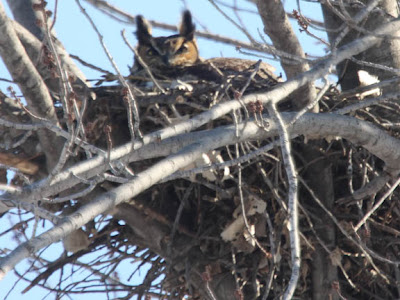 I stopped to take a couple shots of the nest. The female seemed to be sitting higher in the nest. I am guessing that this is because her eggs have probably hatched and her job now is to keep her young offspring safe and warm. I began photographing her on the nest on February 2nd, and from reports on the MOU list server she was probably on it before I started visiting. That would mean that when I took these pics she had been on the nest at least 35 days, great horns incubate their eggs or 32 to 35 days before they hatch, so the eggs have most likely hatched. 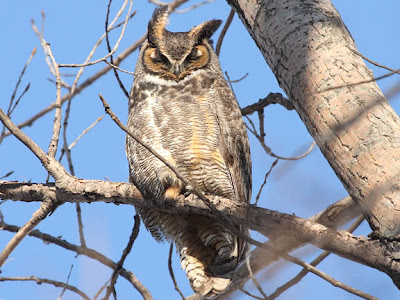 Not wanting to disturb mom on the nest I went off to see if I could locate where the male had flow off to. I found him perched in a tree on the edge of the woods beginning to nod off. 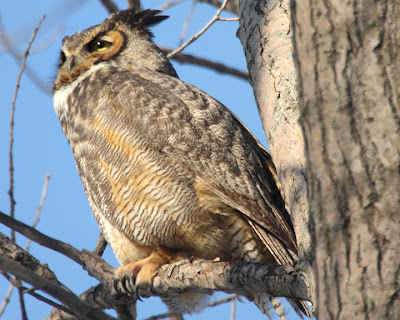 I moved in quietly and slowly stopping at frequent intervals to take some pics and to let the owl get comfortable with me. I was able to get pretty close with out spooking him. I took a few shots then decided that it was time for me to leave and let them have their peace. As I was walking away the male took off and flew back to perch in the tree where the nest was.
Posted by Ecobirder at 11:46 PM

We have seen one Northern Shrike out at Sidney ...shy thing. Love the owl pictures. I really drool over your pictures.

Thanks Ocean, but your pics are just as good as mine and sometimes even better. It is always easier to drool over other peoples pics because we are usually tougher on ourselves. So it is best not to drool because it only ends up getting you a soggy keyboard.