Today is officially the first day of spring, finally! It has been a long hard winter here in Minnesota and I, like a lot of people who live here, am looking forward to the change in the season. The weather has only recently begun to change. We finally have started to get highs in the low 40s in the past week or so and some of the snow has begun to melt. This last weekend the weather was pretty mild so I did a bit of birding around the area. I was hoping to see a good deal of spring migrants but I am afraid it is still a bit early for that here. I did see a couple of robins in our neighborhood but only as I was driving by with out my camera. On Friday, the 14th, I got out of work early and headed over to Carpenter Nature Center. I did not see any new spring migrants but I did witness what I believe was some unique spring behavior. 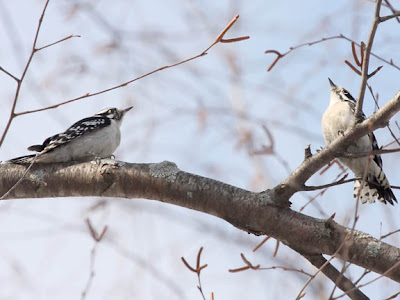 I found two downy woodpeckers that I believe were in the midst of courtship. 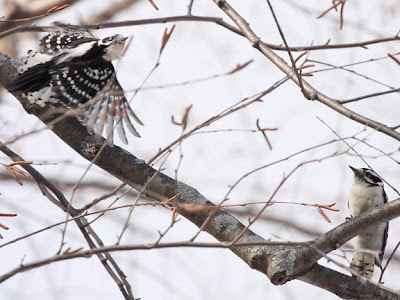 Although downy woodpeckers are pretty common here I am not all that familiar with there courtship and mating behaviour. 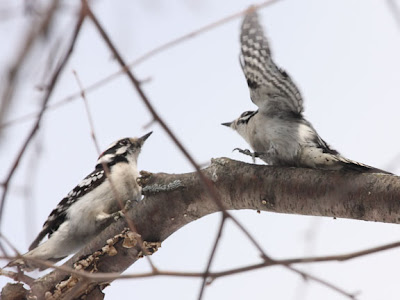 But for a good half an hour these two birds would continually face each other and bob their heads swaying slightly back and forth. 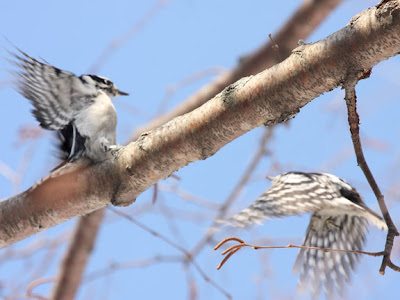 When one bird would take off and move to a new branch the other would quickly follow and land on the same branch or one near by. 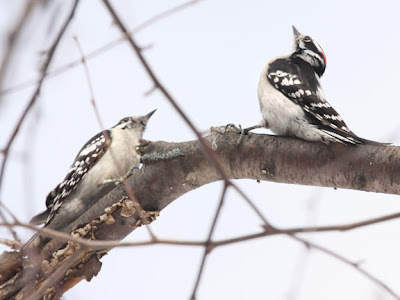 Then they would start the bobbing and weaving again. 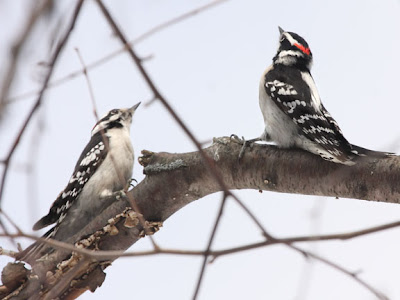 I believe that one was male and the other female but it was hard to tell because they would constantly change positions. It was fascinating and I watched them for about 30 to 45 minutes. 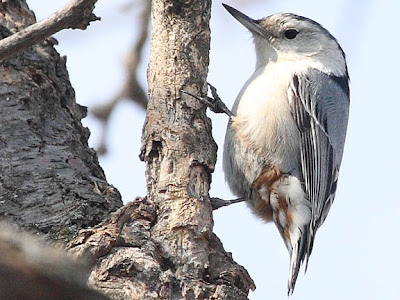 I did find a few other birds in the park. There were plenty of black-capped chickadees, at least one red-bellied woodpecker, and a couple of white-breasted nuthatch. 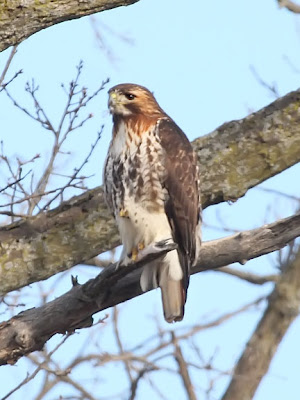 On my way home from the park I spotted a red-tailed hawk perched looking for prey. We still have a lot of red-tails hanging around.
Posted by Ecobirder at 3:14 PM

I love the red-tail and the downies...you seem to manage to get quite close there ecobirder...I never can get those red-tails to pose for me....good pictures as usual here ecobirder..are you in a blind is that how you get to get those red-tail shots??? Apparently the hawks in the US fly toward the camera and sit and pose for hours it seems, perhaps they could come here and give a lesson to my hawks.

I love that you were able to capture that downy mating behavior! Getting to observe behavior like that is for me, the best thing about birding.

LOL! I'd like to see one of those posing red-tailed hawks too!

Amazing set of pictures! Thanks for sharing that, it is certainly great to be able to witness moments like those.

Great catch on the downies!

Great pictures of the Downy Woodpeckers! They ARE fun to watch.