Presidents Day is a paid holiday where I work. Since I was already up north for the Sax Zim Birding Festival I stayed in Duluth Sunday night and planned to do a bit more north country birding on Monday before I headed home. Unfortunately when I woke up that morning Duluth was dark and gray with cloud cover and fog. So I headed home in the morning instead of sticking around. The clouds continued for most of the trip home but cleared a bit as I approached the Twin Cities. Since it was still early I decided to head over to Prescott, WI to see if I could refind the harlequin duck that had been wintering there. 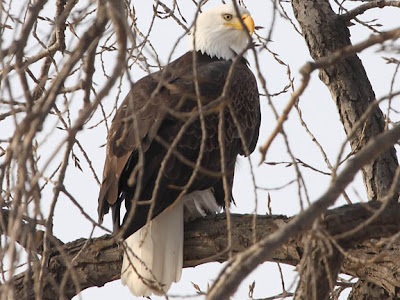 When I arrived I spotted a large shape in a tree on the Wisconsin side of the river. 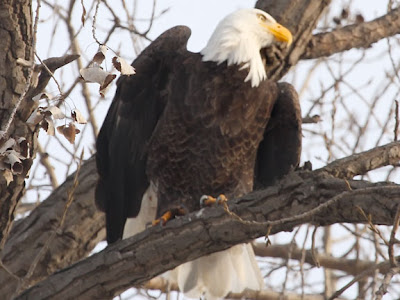 I had to move down to the edge of the river to get a good mostly unobstructed angle. 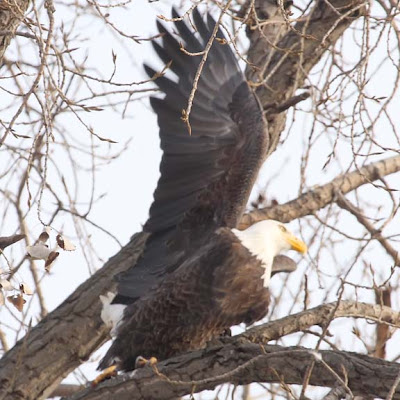 I thought that it was fitting to get some eagle pics on Presidents Day but I was really hoping for the harlequin. As I moved north up the river I noticed a lone dark duck over by the railroad bridge. When I saw it dive under the water I knew that it was the harlequin. 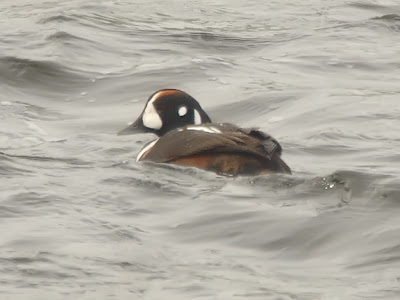 It traveled between the two bridges constantly diving under the water in search of fish. 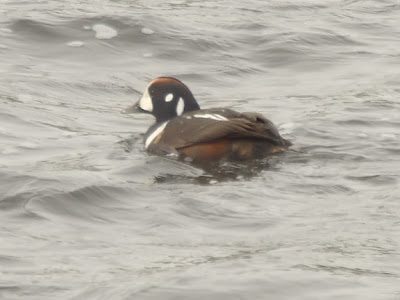 Even though it was clear that day it was extremely cold with a dangerously low windchill factor. So when the duck would move to the Minnesota side of the river and be too far away to get any good pics I would move to the truck. After a short warm up time I would check the river again and usually find that the harlequin had moved back with in range. 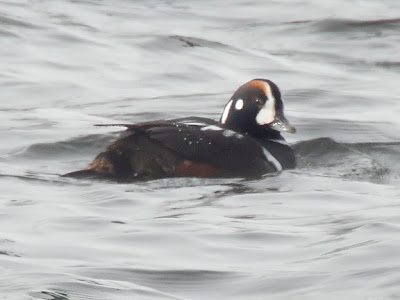 After taking a few shots I noticed one of my tripod feet was gone. While I retraced my steps trying to find the missing foot I lost track of the harlequin. This was a shame because I ran into another birder who had come looking for it. I let him know that I had just been photographing it but I was not sure where it had gone to. Since the bird was gone I decided to head home with frozen fingers and short one tripod foot.
Posted by Ecobirder at 2:38 PM

That was a great day....eagles and harlequins....my favorite things...did not know you had harlequins there. You got some good eagle shots there.

Actually Ocean, harlequin ducks are pretty rare around here. Typically they winter on the east or west coast, like where you live, but every once in a while we get 1 or 2 that get off track and winter on the Mississippi, as long as we have open water. Last year they had a pair further down river in Iowa and we had none. This year looks like it is our turn.