Winters in Minnesota tend to last a long time and can get some what depressing. Sure we have some cool winter birds but most of them are only in the northern part of the state. Down here, in the southeastern part of the state we mostly see the same birds through out the winter such as dark-eyed juncos, tree sparrows, crows, goldfinch, white breasted nut hatch, 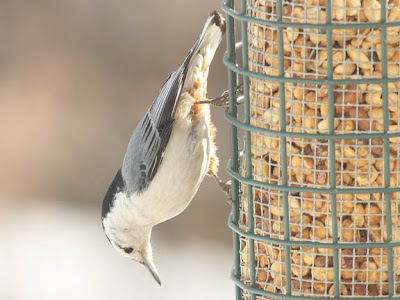 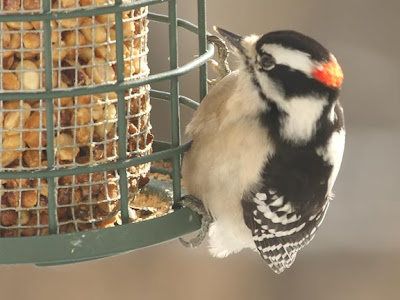 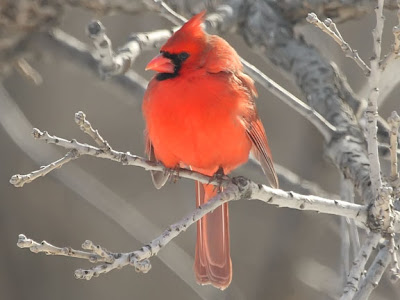 But in the last couple of weeks of February I started to notice some differences on my frequent trips to the Minnesota Valley NWR visitors center. There have been some changes and some new visitors to the feeding stations that they maintain there. One noticeable change is that the goldfinches are beginning to get there color back. Goldfinches molt twice a year, once in the winter, into the drab olive color and once in the spring into the brilliant lemon color that most people identify with goldfinch. 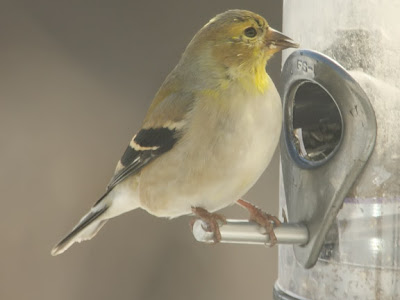 A new visitor to the feeders have been house finches. Originally house finches were a resident of the southwestern US and Mexico but in the 1940s they were introduced to the eastern US. Since then they have spread and are now year round residents for most of the US, including most of Minnesota. I have not seen many around this winter and I have not seen any at the MN Valley NWR this winter, until now. 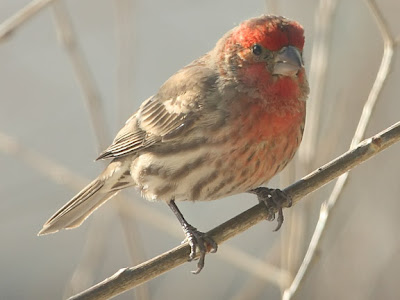 Anther year round resident that has been noticeably absent until recently have been house sparrows. House sparrows were introduced to North America from Europe in the 1800s. 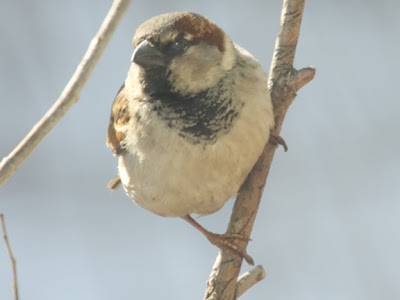 The most exciting new visitor has been a fox sparrow. 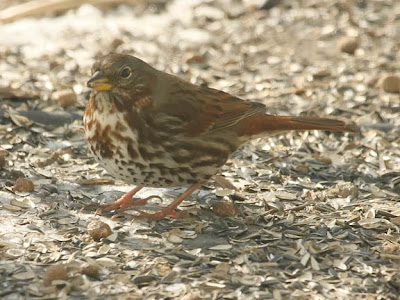 While I remember some reports on the list servers back in December about a fox sparrow at the MN Valley NWR I have not seen any in my many trips here. 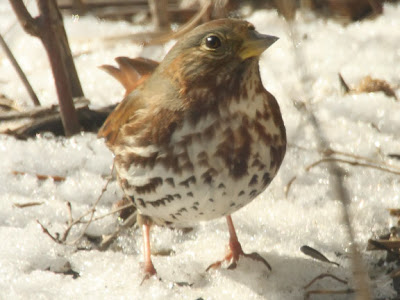 Fox sparrows are birds that we usually only see during migration. There wintering grounds are in the southeastern US where there is less snow making ground foraging easier. Their summer breeding territory is in the western US, northern Canada and Alaska. Spotting a migrating fox sparrow is usually a good sign that the spring migration has begun. Let's hope so, we can certainly use a bit of spring up here in the frozen north.
Posted by Ecobirder at 11:57 PM

Larry Grace photographed the Minnesota Valley fox sparrow at the western feeder several weeks ago, so we can probably assume that it wintered around there.

Nice bird photos. Don't get too bummed out about our local winter birds though. Don't forget that one person's regular birds are another person's lifer. I was recently with some folks from the northwestern US and they were in full on freak out mode because they saw a cardinal. They filled the cards on their cameras taking photos of them because the don't have them at home. Though Cardinals are pushing their range north, same goes for northern Minnesota. Cardinals are scarce up there so while some of us may see this incredible red bird with a crest every day and think it is ordinary and long for northern Minnesota birds, some people up there long for our "ordinary" cardinal.