Last weekend I decided to make another trip up to the Sax Zim Bog area in northeast Minnesota to try and get some more shots of winter specialties before the head back north during the spring migration. The weather on Saturday was cold but clear and I had a pretty good day of birding. The first thing that I did when I arrived in the Sax Zim area was to check for the northern hawk owl that had been hanging around on highway 7. Unfortunately he was no where to be found that day. So I decided to go check Admiral and McDavitt for black backed and three toed woodpeckers. 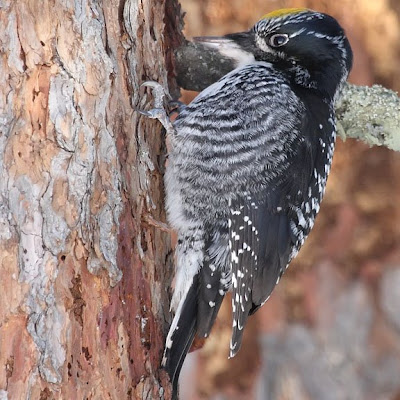 I did not find any of the black-backed woodpeckers that day which is strange since black-backs are more common and I spotted quite a few more of them then three-toed when I was up for the festival a couple of weeks earlier. 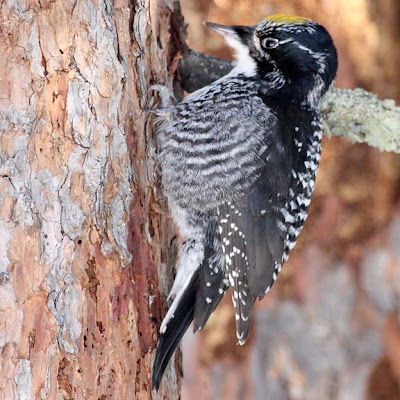 I did spot this very nice male three-toed up on Admiral just north of Zim. 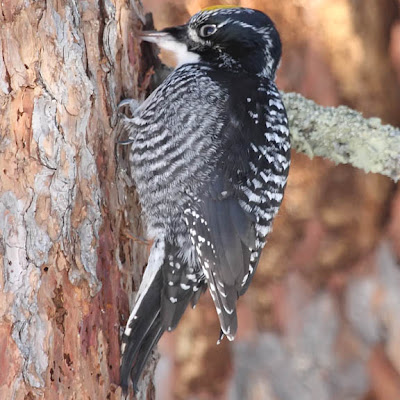 I spotted him by following a hairy woodpecker who landed on the same tree. I knew the first bird that I was looking at was a hairy but when I saw a second woodpecker and saw it was on a tree that was stripped of bark I was hopeful. 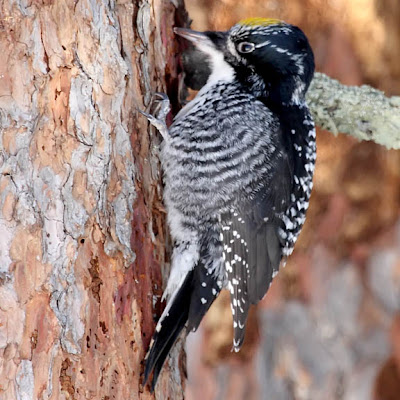 At first he was so high up in the tree that I could not see his gold crown and I thought that it was a female. But after he continued up and got pretty high he stopped and flew down to the base so that I could get some nice pics. 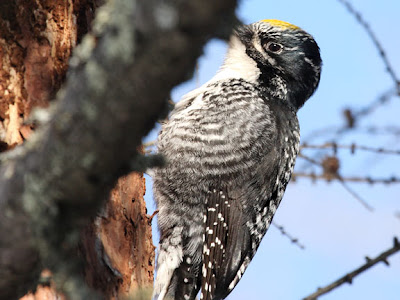 After I left the first woodpecker I decided to head down McDavitt where we had spotted a very photogenic boreal chickadee at the festival. A little ways down the road I noticed some more trees that were stripped of bark so I stopped to take a listen. 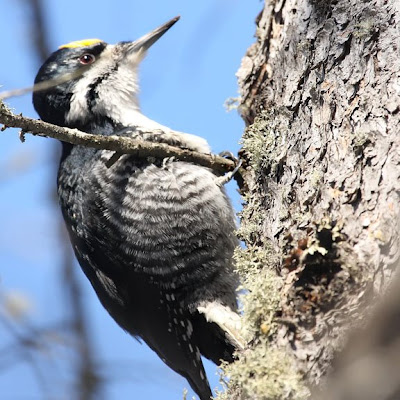 In a little ways from the road I found another male three-toed woodpecker. 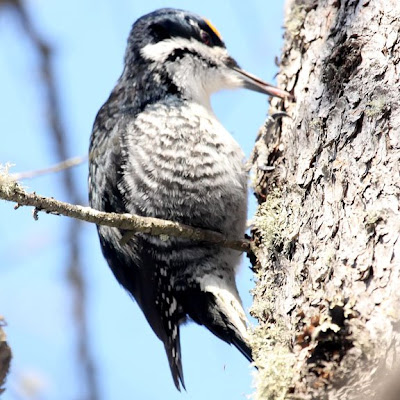 This one must of found some tasty bugs to eat, if you look closely you can see its tongue reaching behind the bark. 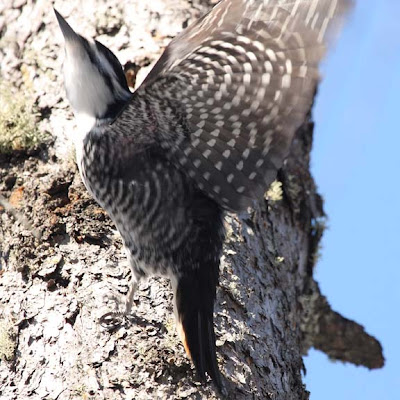 He was not so cooperative. Usually these woodpeckers are so busy peeling bark that they do not pay any attention to the crazy photographers below. This guy though, decided to eat and run.
Posted by Ecobirder at 7:23 PM

Our group of 4 were up there the same day you were. We did finally find the Hawk Owl after scoping the area as far as we could see. The owl was way off to the north. Across that huge field to the north of the farm is a tree line with one tree that stands taller than the rest. While three of us were looking closer to the farm, the fourth person, a non-birder, but a hunter with good "hunting eyes" spotted, through binoculars, a "dark, bird-like splotch" at the top of that big tree. By the time we got a scope on it, it had dropped down a few branches and was not visible with binocs. We were able to ID it through the scope. If our hunter hadn't spotted it, we never would have found it.

Our biggest excitement of the day, though, was just after we left that spot for Stone Lake Road. Off to our right, just before the SLR intersection, was a large dark wolf. We immediately pulled off the road to watch it and could tell that there was something wrong with it, it wasn't holding it's tail up properly. It soon became evident that it was limping, favoring it's left rear leg. It was in a relatively open field with many clumps of shrubs, so we got excellent views of him for 5-10 minutes. I wonder if it had been hit by a car.

Except for our sadness about the wolf, it was a wonderful day!

Thanks for the compliment Mel.

I figured that the owl was further back, since many people had reported seeing far off the road, but I did not spend the that much time on it. I knew that even if I found it that I would not get very good pics at that distance. It was cool that you spotted a wolf but very unfortunate that it was hurt. I noticed that there were quite a few people who I thought were driving to fast.