After I spent quite a bit of time on Admiral Rd and McDavitt Rd photographing three-toed woodpeckers and boreal chickadees I decided to head back over to highway 7 by the sod farm to check for the hawk owl again. I still did not find it so I decided to run over to Blue Spruce Rd to check out the feeding station there. I decided to take the back way so I took Arkola over to Owl Ave. While I was driving down Owl Ave I noticed several small birds flying around on a logging path that lead west from the road, so I turned around to take a look. 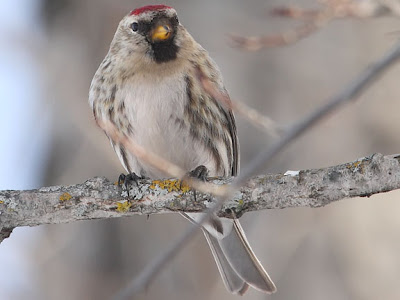 As I was parking I saw the reason that there was so much bird activity. Some one had dumped a bunch of seed on the ground, I think that it was black oil sunflower seed but I am not an expert since my small yard is not very advantageous for feeders, yet. 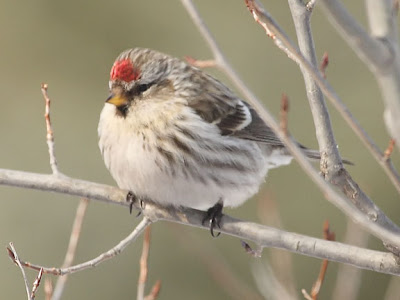 Gathered around the seed were a group of redpolls and black-capped chickadees. 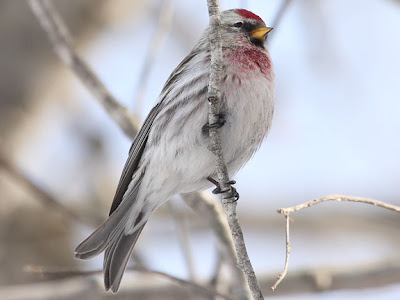 The chickadees where pretty bold and kept eating until I got close, the redpolls would fly up into the safety of the trees any time that I moved and then return for another quick bite while I stood still. 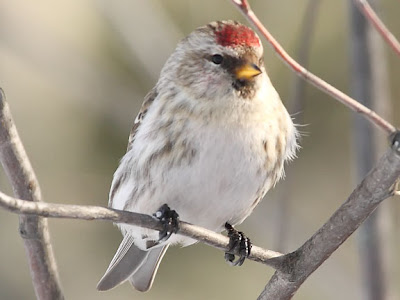 I did not see any of them that looked like a hoary redpoll but they were darting around quite quickly so it was difficult to be sure. Plus I am not all that comfortable in my ability to tell a hoary from a common. 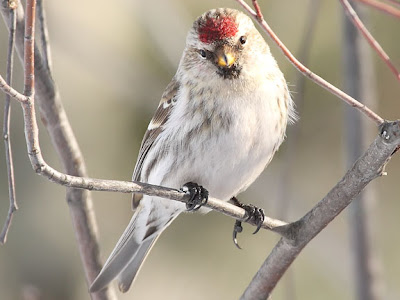 I had to go around the seed pile to get any descent shots because otherwise I would have been shooting straight into the sun. When I got to the other side of the seed I noticed what I believe is the print of a hawk plunging after its prey. 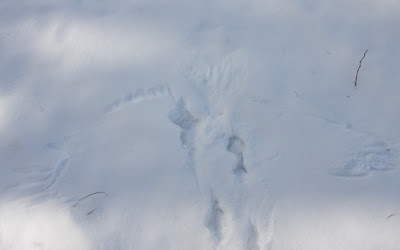 It is a bit hard to see in a photograph but if you look carefully you can see the spread out wings, a somewhat fanned out tail and 2 talon prints. From the prints leading away I am guessing that this hawk was not successful on this hunting trip. I am guessing from the shape of the wings and the size that this was a hawk. Let me know if you think that I am wrong or if you can tell what type of hawk that it is. 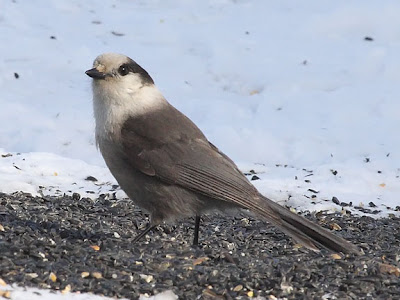 While I was photographing the hawk markings a couple of gray jays joined the party. I did not have the right lens on the camera, I needed a wide angle to get a picture of the hawk print, so I needed to run back to the car to get my long lens. 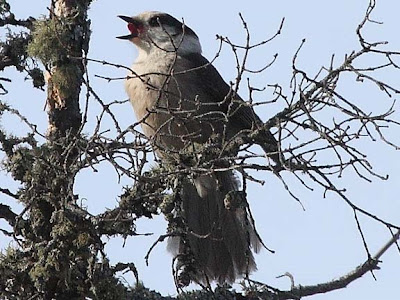 I was able to get a couple of shots off before the jays took off for the shelter of the trees. It was getting late and I still wanted to get to Blue Spruce Road before I had to start the long drive home so I left the chickadees and redpolls to their feast and moved on.
Posted by Ecobirder at 3:27 PM

love that picture of the jay with his beak open just chirping his heart out...I clicked it and it is an incredible photo Ecobirder. How did you get that I wonder.

Great photos of those Sax-Zim birds! We saw the redpolls, but were not fortunate to see the Gray Jays. Oh well, another reason to visit again sometime.....

Beautiful pictures!
Thank you for sharing :)