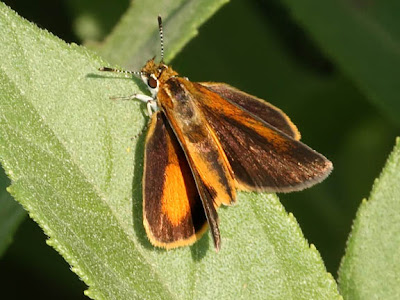 This first photo, I believe, is of a least skipper. I still have a very difficult time identifying the different skippers. Most of them are very small and there are little differences distinguishing several types. 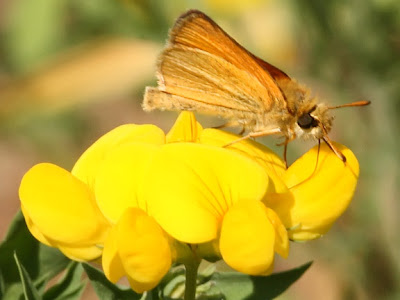 I think that this small one is an European skipper. According to my Kaufman Guide to Butterflies of North America, the European skipper was accidentally introduced into North America at Ontario, Canada back in 1910. Since its introduction its range has spread to include most of the North Eastern and North Central US as well as much of Eastern Canada. 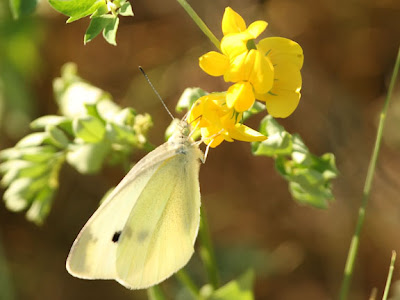 The cabbage white is one of the most common butterflies seen in North America. It ranges through most of the US and Canada. Last year there were a lot of white cabbage butterflies around and so it was not that big of a deal to get a pic. This year though I have not seen nearly as many so I was a bit more excited about getting a pic. 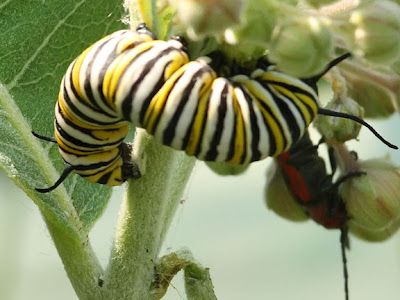 Butterflies have 4 different stages of life. Life for the monarch butterfly begins as a tiny white egg which is typically laid on the underside of a milkweed leaf. The egg hatches 3 to 6 days from the day which is laid and a tiny Caterpillar emerges. The caterpillar will feed on nothing but milkweed leaves for 9 to 14 days. As it feeds it grows pretty quickly. To accommodate their rapid growth the caterpillar will shed its skin 5 times, each time the older smaller skin will peal away with a new larger skin waiting underneath. When it reaches its mature size, about 2 inches long, it will leave the milkweed and look for a safe place to form is pupae or chrysalis. 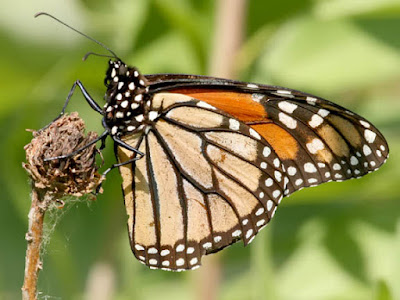 Many people know that monarchs fly south for the winter like birds do, either to the mountains of Central Mexico or the Southern California coast, but many people may not be aware that unlike birds it is not the same monarchs that return the following spring. During the summer monarch butterflies live about 2 to 5 weeks before they die. The last generation of the summer gather together and, as the temps get colder, they begin the long migration to traditional wintering grounds that they have never seen before. On their wintering grounds they cluster together in colonies in a hibernated state to preserve their energy. As the temps begin to warm up with spring the monarchs come to life and begin the migration to the north. They do not go very far however. At this point they are 7 to 8 months old and near to expiring. So they mate and lay eggs. This new generation follows through the life cycle and then as butterflies continue to move north. After their 2 to 5 weeks of life this generation dies, but not before laying the eggs for the next generation, which will continue to move north. This continues with each successive generation moving further north until the end of summer then the cycle begins again with the last generation migrating south.

Great photos as always. I agree
with your ID's too. Did you
notice that Red Milkweed Beetle
on the milkweed behind the Monarch
larva?
Hap in New Hope

Beautiful butterflies! I have been seeing a few skippers in my neck of the woods too.

I actually admire the fact you were able to get a shot of the cabbage white butterfly - I've been chasing them the past week in my yard and no luck w/ a good shot - too fast! Loved the caterpillar photo too and hearing the monarch facts. Didn't realize what a short life span they have.

I also saw the beetle behind the Monarch larva. Was surprised you did not mention it. Love you pics and info, as usual.

Thanks Hap, I did see the longhorn milkweed beetle and I think that I actually took a pic of it alone but I am not sure where it went to. I will have to find it and post it so people can get a better look.

Thanks NW Nature Nut. I hope that you do not have as hard a time identifying the skippers as I do.

Thanks Shelley, white cabbage butterflies do not sit still long but last year it seemed like there were so many that it made it easier to get some pics. Most butterflies do not live long in their adult butterfly state. In most cases turning into a butterfly is just a means for them to mate and propegate.

Leedra, I did not mention the longhorn milkweed beeetle because somewhere I have a better shot of one but with so many pics it is easy to lose one every once in a while. I am sure that I will find it sooner or later and then I will get it posted.