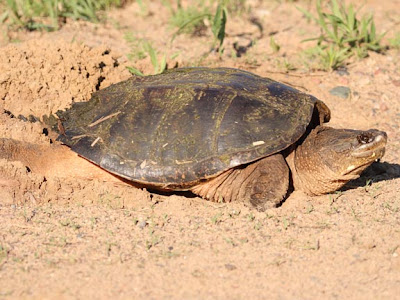 Since she was on the side of the road, in a wildlife management area, and was not being hassled, like the turtle that I helped out the week before at the Old Cedar Avenue Bridge, I decided it was best not to move her. 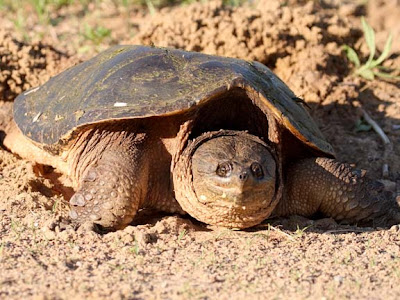 I am pretty sure that this was a female because she appeared to be finishing the process of laying her eggs. Mating can take place any time between April and November, however the females typically lay their eggs in May or June. The females can store sperm for future use, so that they can lay eggs fertilized by sperm from the summer before if they do not mate early in the year. When it is time to lay her eggs the female will leave the water in search of a place to dig a nest. She is looking for a place with soft soil that she can dig in, preferably close to water so the offspring have somewhere to go once they have hatched. Once she finds her spot she moistens the soil with her urine and then digs it out with her back legs. After the eggs are laid she fills the hole back in and then smoothes it over by sliding over it repeatedly. This is what she appeared to be doing when I found her. 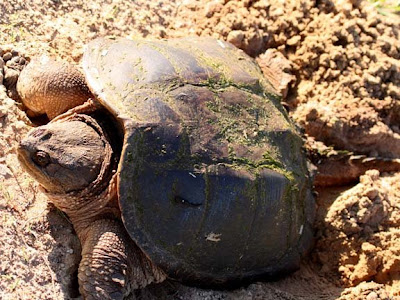 Unlike many other turtles, the snapping turtles large head is too big for it to draw it completely into its shell. So the snapping turtle relies on snapping jaws for protection. When threatened while on land the snapper will stand up high on all four legs, a feat since the average weight of an adult is 30 to 60 pounds, and hiss and snap. Underwater they will typically hide from danger. 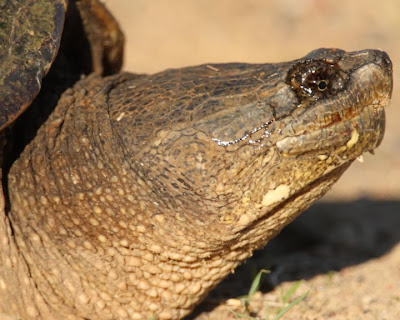 Snappers spend much of their time under water. They usually live in slow moving rivers or streams, shallow lakes, or stagnant ponds. They are omnivores and will eat anything that they can swallow, including plants, carrion, frogs, snakes, fish, small birds and other turtles. 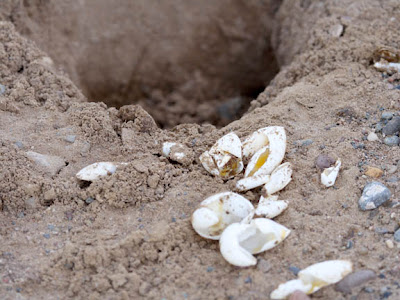 Further on down the road I came across a different turtle nest that had been raided, probably by a raccoon, fox or weasel. There were not very many eggs around the nest, females typically lay from 2o to 80 eggs in a clutch. The eggs incubate for about 60 to 125 days. The temperature of the eggs determines what sex the young turtles will be when they are born, although many will not survive. The young turtle must avoid predators as they head towards the nearest water. Once they reach the water life is still dangerous for the young turtles as they hide from predators such as fish, birds and larger turtles in the shallows. If they make it through their youth then the snapper can live for 30 years or more.
Posted by Ecobirder at 5:07 PM

Interesting info about the snapper - enjoyed the photos! She looks like a "wise" turtle.

Seriously they are so ugly they're cute. Until you get one on your fishing line and then have to cut the line. No way am I going to mess with those jaws!