While we were out at Necedah looking for Karner blue butterflies we spotted this butterfly perched on a bush. 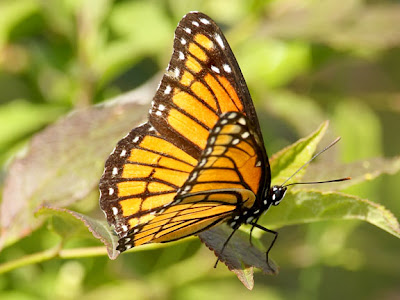 I wasn't planning to stop to photograph it, since monarchs are pretty common, but then a bird flew across the road so we stopped to see what it was. 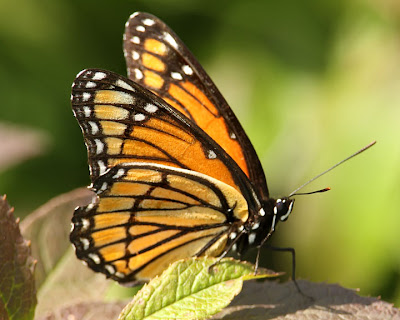 We never did get a good look at the bird, let alone a pic, but while we were stopped I decided to take a shot of the butterfly. As I got a better look at it through the view finder I realized that this was a viceroy butterfly and not a monarch. 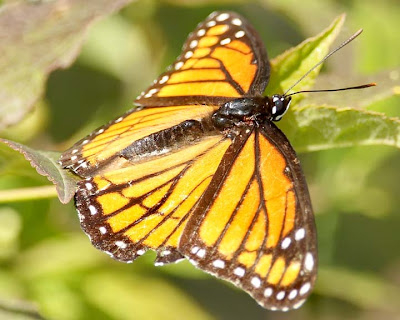 The viceroy looks similar to the monarch except that it is typically smaller and has a black postmedian band which crosses the hindwing, look at the three pictures above in comparison to the monarch pictured below. 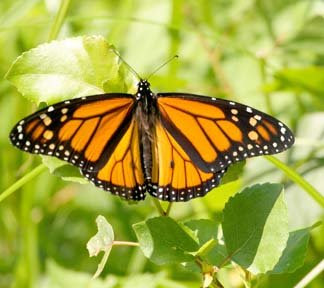 It is believed that its similarity to the monarch, in looks, is a type of a defense mechanism for the viceroy. Because the monarch feeds on the milkweed plant, while in its larval state, it is very distasteful to most predators. Birds who try to eat a monarch will usually avoid them after the experience. Since the viceroy looks similar in appearance often times it will also be avoided even though it does not feed on milkweed.
Posted by Ecobirder at 4:42 PM

When we least expect to we see something new. The camera makes us stop and REALLY see the world around us.

cool pictures and nice to be able to compare the two species. Isn't nature remarkable?

Thanks Leedra, one of my goals is to try and bring my readers something new every day.

Thanks PB, I always find nature remarkable. Thanks for visiting.