Birding at the Bass Ponds

Over near the Bass Ponds the shallow waters of the flood plain of the Minnesota River have attracted a good number of great blue heron and great egret. 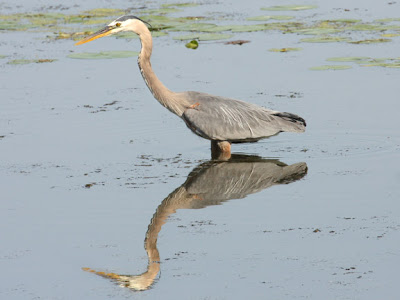 Their tall legs and long necks are perfect for wading through the shallow water and picking off fish, frogs, snakes and other appetising delights. 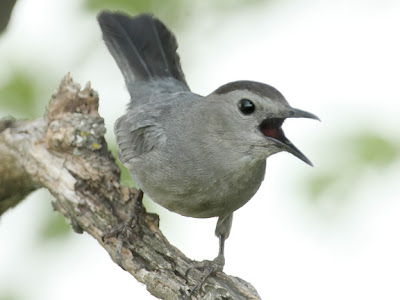 Up near the path I think that I got to close to a gray catbirds nest or at least its territory, because this catbird was not shy about reading me the riot act. It was so noisy that I was afraid that it was going to have a melt down. 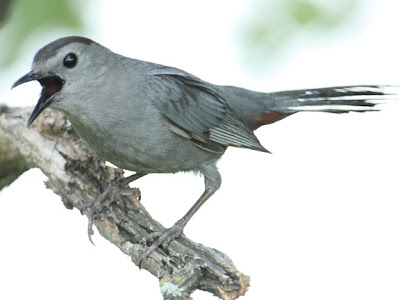 Usually I only get fleeting glimpse of catbirds as they move through the dense foliage. It is easy to know when they are around though, since they have one of the easiest calls to recognize. I am not very good with bird calls yet. I did several Christmas Bird Counts last year, and I was partnered with Jim Ryan on one, Steve Weston on one, and Mike Hendricks on a couple, and these guys were all very easily able to ID birds by song. I am still at the stage where I am trying to ID them by sight, however even I know a catbird when I here it. This catbird was not satisfied with scolding me from inside the bushes though it had to come out in plain sight to let me have it. I snapped a few pictures and then moved on unfortunately all the ruckus spooked the other birds around and so I was not able to get any more bird pics. So I decided to turn to butterflies.
Posted by Ecobirder at 3:18 PM

I LOVE those catbird photos!

Nice story about the catbird. The photo of the Heron is great. The shadow is exceptional.

you captured a great image of the catbird w/ his mouth wide open scolding you - definitely worth the great shot I imagine!!

Thanks Lynne, Leedra, and Shelley. That was the bravest little catbird that I have ever seen. I checked back later in the month but it was not around. Maybe too many big jerks with cameras spoiling the neighborhood.