The Bass Ponds is always a good place to look for dragonflies. BP consists of trails around a series of small ponds, these ponds where once used for producing fish to stock lakes in the area. Between the tails and the ponds there is a good deal of grass, weeds, milkweed and other pond vegetation. On one pond there is a small boardwalk that goes out to a viewing platform in the pond and the Minnesota River runs along the eastern border of the park. 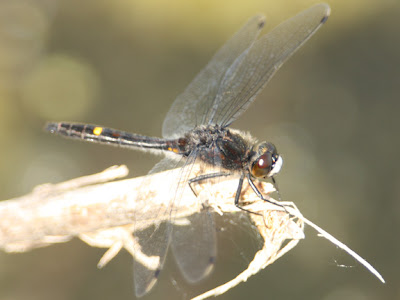 The dot-tailed whiteface is one of the dragons that I photographed a lot early in the summer. 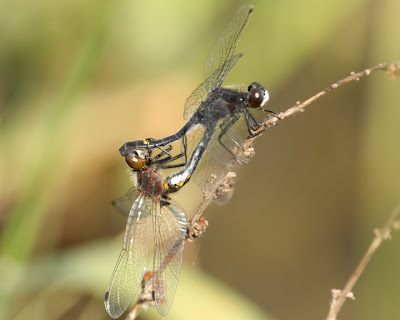 I caught this pair in the wheel position. This is how dragonflies and damselflies mate. So I guess you could call this dragon fornification. 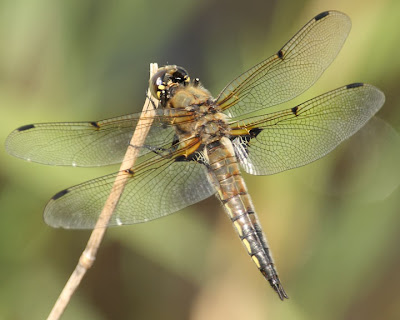 Another dragon that was fairly common that day was the four-spotted skimmer. These larger dragons are named for the four spots on each pair of wings. 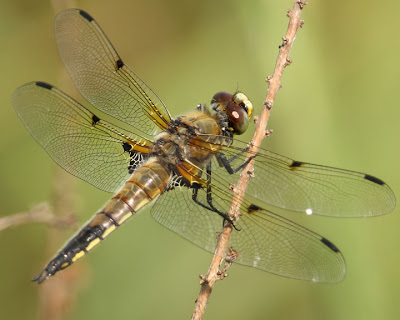 Four-spotted skimmers are found in many places around the world. Besides most of North America they can also be found in Europe, Northern Africa and even Japan. They like to perch on twigs or other taller vegetation and wait to ambush prey, which even includes mid-sized dragons like meadowhawks. 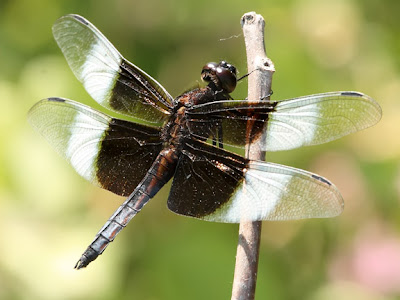 The widow skimmer is another larger dragon that prefers to perch on twigs or reeds waiting for prey. They are usually found in established ponds, rivers and lakes and shy away from seasonal ponds. 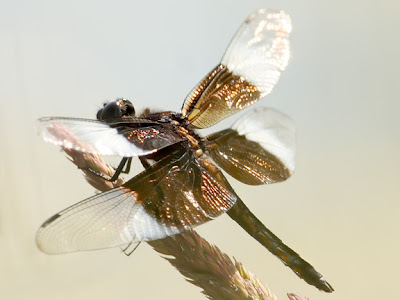 According to Kurt Mead, in his book Dragonflies of the North Woods, widow skimmers spend the night hanging beneath overarching leaves. Dragonflies of the North Woods is a great book if you want to go dragon hunting in Minnesota, Wisconsin, Michigan, or parts of southern Canada. It is specifically meant for the northern part of Minnesota, Wisconsin, and Michigan, however I have only found one dragonfly in southern Minnesota that I did not find in the book, so I certainly recommend the book and use it all the time myself for identification and research.
Posted by Ecobirder at 5:23 PM

Great photos, and your information is great too. I have been meaning to get a book on Dragonflies, but the book you mentioned won't do me much good. Don't know if I will ever make it to your area. Your information is helping my interest until I get me a book for this area.

I received a free copy of "Dragonflies through Binoculars - A Field Guide to Dragonflies of North America" by Sidney W. Dunkle (2000)today and look forward to exploring your blog to study the various species you have posted.

I would like to reccommend it to the first commenter.

Thanks Leedra, most dragonfly field guides out there are set up more for regional areas. There may be one for your area but I am not sure. I have been trying to add more links and other resources that I can find on dragonflies and butterflies so make sure and keep an eye on the links.

Gallicissa is right. They had this book at a dragonfly workshop that I attended last weekend. It is supposed to cover all 350 North American species but our workshop leader was not very impressed with how it is layed out. It is like a lot of the older bird field guides that I have where the pictures are in a different spot then the info. It may help though if there are no regional books for the area that you live in.