Earlier today I read on the MOU list that someone had reported spotting an immature yellow-crowned night heron near Lake Hiawatha. The weather was not good with overcast skies and the threat of thunderstorms but I did not have anything else to do so I decided to go anyway. I printed out the directions grabbed my gear and headed out. It took me a little while to find the location, which is on a golf course, but all that I saw was a great blue heron. Since I was not sure how the golfers would react to my being there, I have since read that they have escorted birders off the course, I decided to go to the other side of the lake which is part of a public park. From there I spotted a heron on a sandbar a ways away. I took a couple shots but with out any light there was little chance of getting a picture at that distance.

I was on my way out when I spotted another birder, Rob Daves, in the area. Figuring he was there for the same reason as I was, I decided I would point out where I had seen the heron. We both watched the heron for a while, I even tried to use my doubler to get a closer picture but with no light it just was not working. Then we got lucky and the bird flew near to where we were standing. We got a good close up view and a picture. 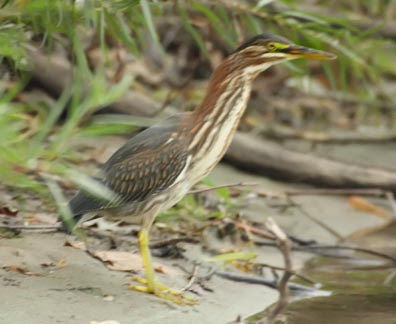 It was still a bit blurry because of the lack of light, but it is obviously a green heron. Probably an immature due to the abundance of white streaking in the throat and chest. I am not sure if this was the bird that was reported. The one that other birders had reported was supposed to be mixed in with a couple of black-crowned night herons but this one was alone. I may try to get back and check again when I have a bit more light.
Posted by Ecobirder at 9:22 PM

That is a Green Heron you have posted on your blog.

See you on Saturday.