On my trip home from the Quad Cities on the sixteenth I made another stop in at the National Eagle Center. On this visit I signed Michelle and myself up as Feather of Flight members for the year. I also sat in on a program that was going on when I arrived. The program was informative and included some information that I did not know. They ended the program by bringing in Columbia, one of there educational eagles to visit and share lunch with us all. 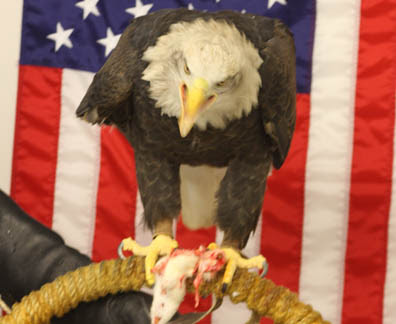 Most of the time the eagles are kept on a special diet but for helping in the program they are given a rat for a treat. Eagles eat their entire prey, including bones, fur, skin and internal organs. Unlike owls, who swallow their prey and then discard bones and fur by throwing up pellets, the eagles stomach can digest the entire rat. 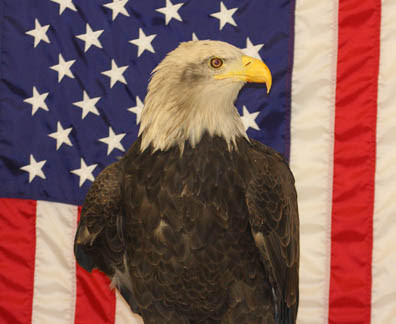 Columbia is the youngest of the three educational eagles at around six years old. She was adopted by the center in 1993 and named in memory of the Columbia Space Shuttle and her crew. 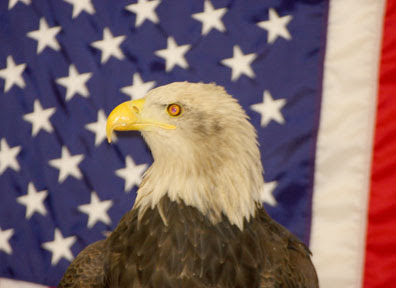 I will have to keep these picture close at hand for the next time I need to make a patriotic post. Columbia did a wonderful job. After the program I went in to see the eagles and was lucky enough to find Marybeth Garrigan, the center's program director, holding Angel, another of the center's educational birds, and answering visitors questions. 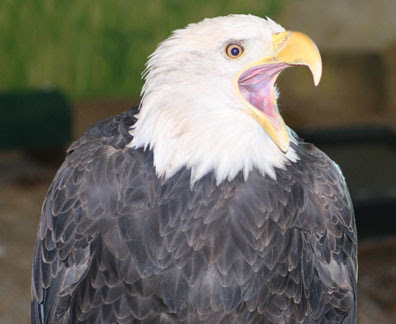 Angel is about 9 years old and was found in the Grantsburg, WI area. For those new to the website or not familiar with the Minnesota and Wisconsin area Grantburg is the gateway to Crex meadows, which is where I rescued an injured eagle earlier this year. 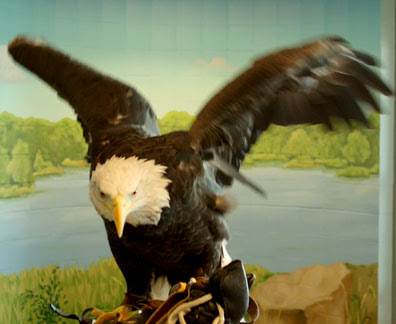 Angel had a broken wing that healed improperly and had to be re-broken. Even though the bone eventually healed properly the muscles in that wing did not. So angel has some flight ability but can not sustain it so she can not be released back to the wild.

Also it was interesting to see that they had added the mural to the back wall of the eagles room in between Thursday the 13th and Sunday the 16th. Check out the pictures from the 16th.

September 29th and 30th is the grand opening for the new building. The whole city of Wabasha is joining in on the celebration with a couple stages set up for musicians and story tellers, paddle boat cruises on the river, DNR flatboat tours of the Mississippi River Channel, educational programs and tours from the National Eagle Center, Raptor Center and others and a US Postal Service commemorative stamp cancellation. For more information on the grand opening check out their website http://www.nationaleaglecenter.org/GOmain.htm

Posted by Ecobirder at 4:08 PM