First time out with the new camera

On August 12th, while out shooting at Crex Meadows, my Canon 20D flipped out on me. Life with out a camera is not acceptable so I needed to decide what I was going to do. I could shoot with my EOS 3 film cameras. The EOS 3 is a great camera but shooting film is an extra cost for film and development and it takes more work to get it into a web usable form. I could get my 20D repaired but I was not sure how long that would take. I could buy the camera that I really wanted, the EOS 1D Mark III but the $4500 price tag is a bit more then I can justify being just an amateur photographer. My other 2 choices were to purchase a Canon 30D or a XTI. The 30D is the upgrade to my 20D. The cost was around $1000 and it did not have much better features then the 20D. The XTI is the new Canon Rebel digital SLR which runs around $700 and has a 10.1 megapixel sensor, instead of the 8.1 in the 20D and 30D. It also has a sensor cleaning system which is nice. However the XTI does not do spot metering and is not made as ruggedly which is important since I end up in some pretty nasty places on occasion.

The other complication was that the 30D had been on the market for almost 18 months which meant it was almost time for Canon to put out a new model. I decided to take the 20D in and have it repaired and wait to see what Canon would do. I used my wife's XTI to take pictures while I was waiting and while it is a good camera it was not what I was used to. At the end of August Canon announced the release of the new 40D. The 40D is built like the 20D and 30D but it has the 10.1 megapixel sensor of the XTI. It also has the sensor cleaning system of the XTI but it also has spot metering like the 20D and 30D. It has a 9 point auto focus system like the 20D, 30D, and XTI, however all the points are cross type points instead of only the middle point being cross type on the other cameras. This is supposed to give the 40D a 30% faster focus then the other cameras that I was looking at. The 40D also has faster memory and processor which gives it an upgraded 6.5 frames per second shooting speed and will allow you to shoot over 70 large JPEGs before the camera has to stop to write. The processor is also a 14 bit processor instead of a 12 bit processor like the ones in the other cameras which gives a lot more color depth.

I was very excited about the 40D but there was no definite release date. The only info that Canon gave was that the camera would be released in September. So starting September first I started keeping an eye online. By September 4th I started to see these being advertised but mostly on sites of somewhat questionable retailers. If I am going to purchase something online for $1300 I want to do it with someone that I trust. Finally by the 6th B&H photo, where I buy a lot of my equipment, was showing that they had stock. I went to place my order but before I could finish they were already sold out. I was pretty disappointed. I was hoping to get a new camera before I left for the Midwest Birding Symposium on the 13th. I looked around some more but could not find any stock at any retailer that I had worked with before. Then I got lucky and found that ZipZoomFly, the place where I buy my computer parts, had listed that they had stock. I quickly put in my order, and it was a good thing since right after I did they went out of stock, and I received my new camera on Monday the 10th. That afternoon I took it out to Dodge Nature Center for my first test drive. Some of the controls are a bit different then my old 20D so I am still getting used to it but I got some good shots and so far I am pretty happy. Here are some shots of a couple of ruby-throated humming birds that I found at the nature center. 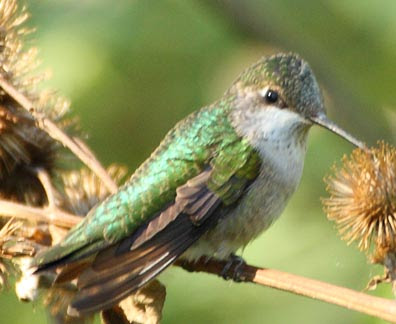 These first 2 shots where shot using the auto focus. 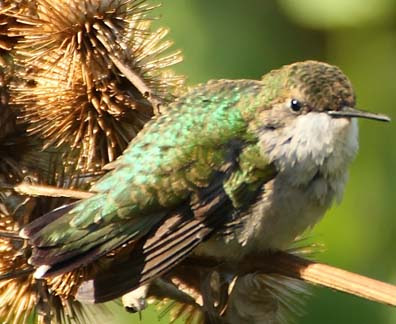 It was a little too dark in the shade for the auto focus to catch this hummer while he was moving between flowers so I switched to manual focus. The picture is not as clear as I would like but it is not bad considering the conditions. 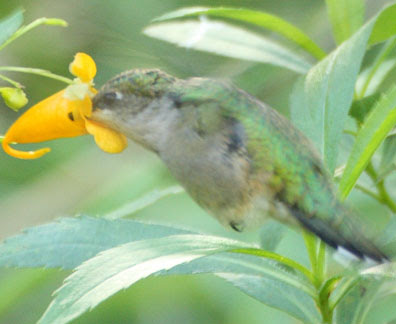 I will post more shots taken on my new camera tomorrow.

Posted by Ecobirder at 7:41 PM