One of the more popular bird sightings listed on the MOU list server, for the Twin Cities area, has been an immature yellow-crowned night heron spotted by Lake Hiawatha in south Mpls. Although I have photographed both yellow and black crowned night herons in the past, on my frequent trips to Florida, the yellow-crowned are not very common this far north. So last Thursday, September 20th, I went out to see what I could find. All that I found was a green heron but unfortunately the trip was cut short by thunderstorms that rolled into the area.

So I decided to try again on Sunday. The weather report was supposed to be good so I got up early and headed out before the sun came up. I arrived at around 6:30 and made my way to the area by the golf course where the bird had last been reported. Another birder was behind me heading to the same area. I looked around on the golf course a bit and then the other birders cell phone rang. He told me that the person who had called had spotted the yellow-crown over by the creek, so we headed back that way. By the time we arrived the person who had spotted the bird had lost it in the tree cover. We looked around but we could not find the bird.
As the sun came up and began to light the area we did begin to spot the black-crowned night herons. 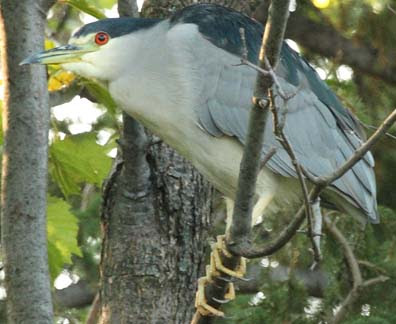 With their light color the adults where not too hard to spot. 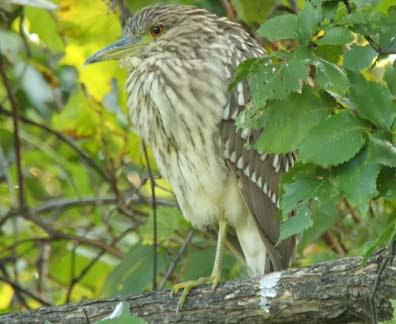 The immature where a different story though. Their color and the striped patterns on their wings and breast blended in real well with the bark of the trees. I continued to search the area for a couple of hours. During that time I saw 4 immature black- crowned, 3 adult black-crowned, quite a few sparrows and warblers and about 20 different birders. We were all looking for the yellow-crowned night heron and we did not have any luck. Finally I decided to leave. Beautiful sunny days are precious in the fall, winter, cold and snow come all too quickly, so I decided that I would go do some birding at Wood Lake Nature Center instead.

Later that evening I returned to Lake Hiawatha for another try at the yellow-crowned night heron and this time, with the help of several birders who were already there, I was able to get a couple of shots of the bird. 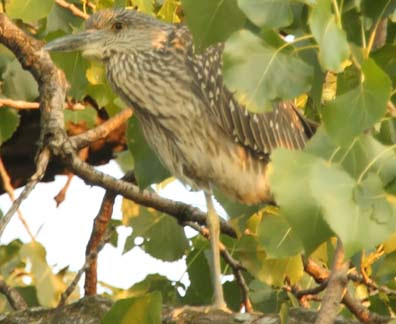 He was in a high cotton wood tree near the road. the light was not really good, the sun was already beginning to set, and I had to shoot from quite a ways away. This meant using the teleconverter which means even darker pictures, so I decided to try and see if I could spot the bird from the other side. 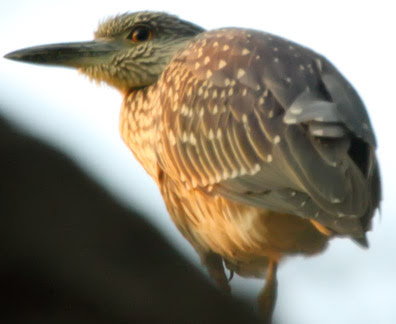 I did manage to find a hole through the foliage and was able to get a shot. The sun was behind the bird so the lighting was still pretty poor, but you can definitely see the difference between this bird and the immature earlier in the post. At about 7pm he flew off with an immature black-crowned towards the lake so I decided to call it a night.

Are the Black Crowned Herons common in the Maryland area? I live in Frederick, MD and there is a about 12 adults atleast living in a row of pine trees in a local park. I have been trying to figure out for the last few years what they are and I am about 95% sure that they are these herons. I would love to know if this is something unusual!