Last Monday evening I was checking out the MOU list server and I saw a few posts about a rare black-bellied whistling-duck that had been sighted at one of the local lakes in the Twin Cities. Now if you happen to be from south Texas or Arizona you might not think that a black-belled whistling-duck is such a rare bird, however for those of us in Minnesota there have been less then 10 recorded sightings of them in the past 50 years. Typically I do not go out and bird on Tuesdays, because I work a second job in the evening and usually I go home and eat and sleep in the time that I have between jobs, but I was worried that such a rare bird might not hang around. So I gave up my nap and drove to Eden Prairie to try and get a look and hopefully some pics of this bird.

The bird had been hanging out in a small pond that was adjacent to Anderson Lake in Anderson Lake Park. When I arrived there was another birder there looking for the bird, after a couple of minutes we spotted it preening on a dead log in the pond. 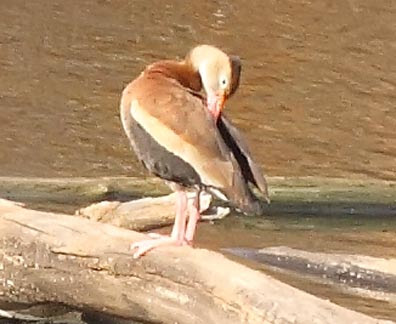 After preening for a short time the duck flew further to the other side of the pond and began to swim around the shoreline. 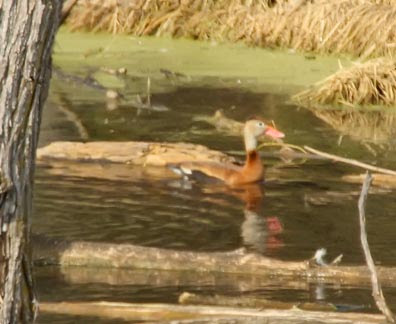 It swam south along the western shoreline and then it went into the weeds along the shore and we could no longer see it from the hill where we were standing. 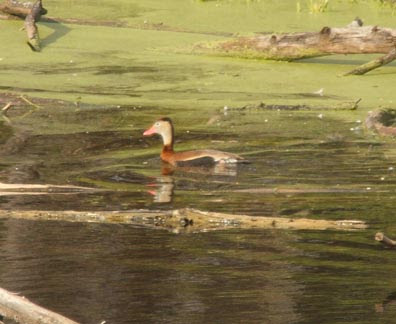 Since I could no longer see it I decided to walk down the trail that lead to the other side of the pond. Unfortunately I still could not locate it from my new location. I was closer to where I had last seen the duck but I no longer had the advantage of being up on the hill. After unsuccessfully looking for a while I heard a rustle in the weeds further down the shore. There the duck took off from the weeds, giving a whistle as it took to the air. It headed in the direction of the lake so I headed over to the lake to see if it might have landed there. There were a lot of geese, gadwall, wigeons, mallards and coots on the lake but I did not see the whistling duck. I decided that it was prolly best for me to leave otherwise I would not make it to the second job on time.